Please ensure Javascript is enabled for purposes of website accessibility
Log In Help Join The Motley Fool
Free Article Join Over 1 Million Premium Members And Get More In-Depth Stock Guidance and Research
By Christine Williams – Sep 27, 2020 at 9:20AM

As more companies go digital, e-agreements have been heating up.

In an accelerating digital world where business can be conducted from almost anywhere, the e-agreement business is booming. DocuSign (DOCU -0.98%) outperformed in its last quarter, and earlier this month, CEO Daniel Springer noted during an industry conference that the company's total addressable market could be as large as $45 billion.

With a protracted shift in business habits in the making, this company is the next cloud-software platform on the rise.

DocuSign has made it a habit of increasing its total revenue every single year, and the latest quarter was as stellar as could be expected. A strong increase in total paying customers brought in 45% more revenue in the fiscal 2021 second quarter than the prior-year period. 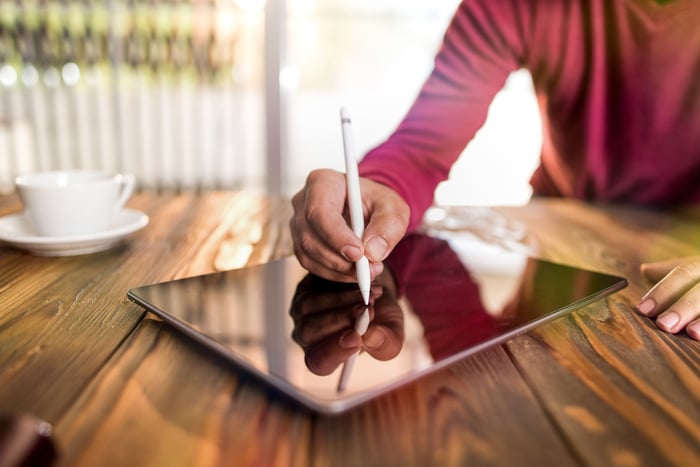 Part of this could be attributable to the company's 29% year-over-year increase in sales and marketing expenses, but more than a few customers certainly signed up for DocuSign's e-agreement management services as a result of the pandemic. One could argue that smaller customers would potentially shy away from converting to digital contracts, as an average $36 in paper savings per agreement may not entice pandemic-pressed businesses to spend time and money in workflow improvements at the moment. However, the last quarter actually saw a 39% year-over-year increase in total customers and a 55% jump in enterprise and commercial customers.

DocuSign has been focused on increasing its operating leverage, and the most recent influx of business has helped carry the company further toward profitability. While the company's gross margin remained steady at 74%, it did reduce its operating expenses as a percentage of total revenue. Specifically, general and administrative expenses fell two percentage points, and sales and marketing expenses declined seven points.

The company's largest focus was undoubtedly its efforts to build its customer base, and despite years of increasing revenue, DocuSign has not posted a net profit to date. Of course, the company has been reporting positive adjusted earnings for the past two years, with much of the reconciliation coming from stock-based compensation and associated taxes. But combining decreased expenses with increased revenue, the day for GAAP-based profits may not be far off.

Second-quarter free cash flow also jumped significantly, from $12 million to $100 million year over year, allowing the company to continuously reinvest in improving its product to address its evolving customer needs.

Overall, DocuSign spends heavily on self-improvement, billing its product cloud as the one-stop solution for digital contracts management. It recently released a Facebook integration that permits access to DocuSign through a Facebook chatbot, and it just launched a new workflow template that helps businesses quickly configure common contract processes. Additionally, the company acquired Liveoak Technologies to integrate video-conferencing software to digitize the notarization process, thereby speeding up its agreement process even further.

Looking forward, the company has guided for $1.386 billion in total revenue for fiscal 2021 at the midpoint, a 43% increase over the prior year, and analysts expect that double-digit growth to continue for some time. In fact, management has asserted that DocuSign is in a very favorable leadership position within the industry at around six times the size of its nearest competitor in e-signatures and an even market share split with its rival for the rest of the DocuSign Agreement Cloud. With such strong positioning and a market opportunity that is only expanding more quickly thanks to the events of 2020, this tech stock should be on your watch list.