Here's how they could do it.

There's no sure-fire way to get rich quickly. However, there are some stocks that hold the potential to generate massive returns in a relatively short period of time.

These stocks tend to have several things in common: huge addressable markets, competitive advantages, and small market caps. And you don't have to invest a ton of money in high-growth stocks that check off these three boxes to see sizzling gains.

But which stocks fit the bill? If you've got $5,000 to invest, here are three stocks to buy that could realistically double by 2022. 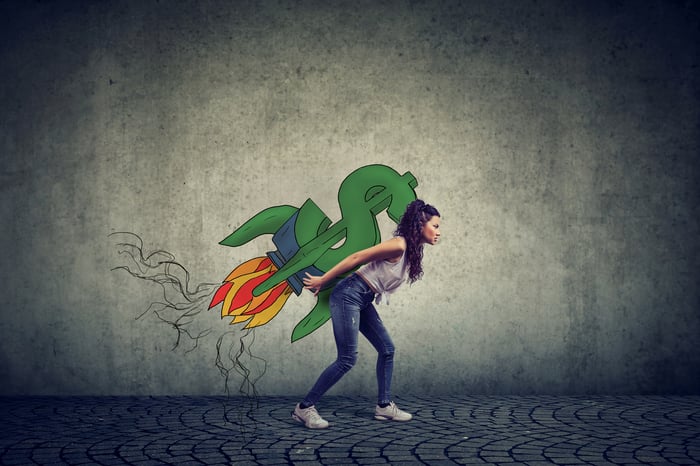 Cresco Labs (CRLBF 5.21%) ranks as one of the biggest U.S. vertically integrated cannabis operators. The company operates 19 retail cannabis stores in nine states. It has 16 cultivation and production facilities with over 600,000 square feet of total cultivation space.

In case you haven't noticed, the U.S. cannabis market is absolutely booming. Thirty-three states have already legalized medical cannabis, with 11 of those states also legalizing recreational marijuana. It's likely that more states will be added to those numbers after the November elections. And there's a real possibility that the elections could significantly increase the chances of marijuana legalization at the federal level in the U.S.

Cresco focuses on markets with strong consumer demand and well-established regulatory frameworks. Its current locations allow the company to target roughly 60% of an addressable market in the U.S. that's expected to reach around $30 billion by the end of 2022. Cresco's market cap stands at close to $1.2 billion, giving the cannabis operator a huge growth runway.

In the second quarter of this year, Cresco reported revenue of $94.3 million, a 42% increase over the previous quarter. This growth was mainly fueled by the launch of the recreational marijuana market in Illinois earlier this year. Even if Cresco's growth slows somewhat, the stock still looks like a good candidate to at least double within the next couple of years.

With the U.S. cannabis market exploding, you probably won't be surprised that another player in the industry also makes the list of stocks that could double by 2022. But Innovative Industrial Properties (IIPR -3.24%) isn't a typical kind of marijuana stock.

IIP stands as the first and (at least for now) only cannabis-focused real estate investment trust (REIT) that trades on the New York Stock Exchange. This gives the company greater access to capital than smaller players. And it has helped make IIP the go-to source for cannabis operators seeking to raise cash via real estate transactions. While IIP's shares have soared more than 60% this year, its market cap remains relatively small at $2.7 billion.

There's a really straightforward way for IIP to double or more in a short period of time. All the company needs to do is fuel earnings growth by buying more properties and leasing them back to cannabis operators. That shouldn't be a problem whatsoever for IIP: So far in 2020, the company has boosted its number of properties leased from 46 to 63.

IIP also offers another nice bonus for investors -- its dividend. The company's dividend currently yields north of 3.6%. IIP has increased its dividend payout by 368% over the last three years.

You don't have to stick only with the cannabis market to find areas with huge growth potential. The COVID-19 pandemic has opened up significant opportunities. Novavax (NVAX -3.48%) has already been one of the biggest winners in the coronavirus vaccine race and is poised for even greater success.

The biotech recently launched a late-stage study in the U.K. evaluating coronavirus vaccine candidate NVX-CoV2373. Novavax plans to initiate a phase 3 study in the U.S. soon, perhaps in October. So far, the company has secured supply deals with the U.S. and the U.K. and appears to be close to finalizing an agreement with Canada.

in addition to NVX-CoV2373, Novavax's pipeline includes another promising candidate in NanoFlu. The company announced positive results from a late-stage study of the experimental flu vaccine in March. Novavax plans to file for regulatory approval after it conducts a lot consistency clinical trial.

With potential peak sales for NanoFlu of up to $1.7 billion, Novavax's current market cap of $6.6 billion doesn't seem too expensive. And if NVX-CoV2373 performs well in late-stage testing, the biotech stock could easily double by 2022 or even sooner.

There's a trade-off you have to make with any stock that has a legitimate chance at doubling within only a couple of years or so. The opportunity for big and quick gains comes with big risks.

Novavax is the riskiest of these three stocks. NVX-CoV2373 could flop in late-stage testing. NanoFlu might not win regulatory approvals or, even if it does, could be a commercial disappointment. Cresco and Innovative Industrial Properties face some risks, too. Both companies could run into stronger competition as the U.S. cannabis market grows.

But for investors willing to accept the trade-offs, Cresco Labs, Innovative Industrial Properties, and Novavax could generate a lot of money in a short amount of time.