With a market cap topping $1 trillion, Microsoft (NASDAQ:MSFT) has seemingly regained its market-darling status. One strategic shift that has driven the software company's growth has been the move from single product sales to subscriptions, whether in its enterprise software or its consumer-focused console gaming division. The next step in Microsoft's plan falls in that latter category, where it's aiming to offer Xbox owners a subscription with so much value that the brewing next-generation console war may be over before it really begins.

During the pandemic, it's really not a surprise that people are looking for a distraction and video games provide a way to escape the current reality. To help subscribers have more games to escape into, Microsoft developed Xbox Game Pass.

Launched in 2017, Game Pass allowed subscribers to download and play more than 100 games for a single monthly $9.99 fee. By 2019, Microsoft introduced Game Pass Ultimate for $14.99, combining access to those games with an account for Xbox Live Gold, which lets subscribers play multiplayer games online. 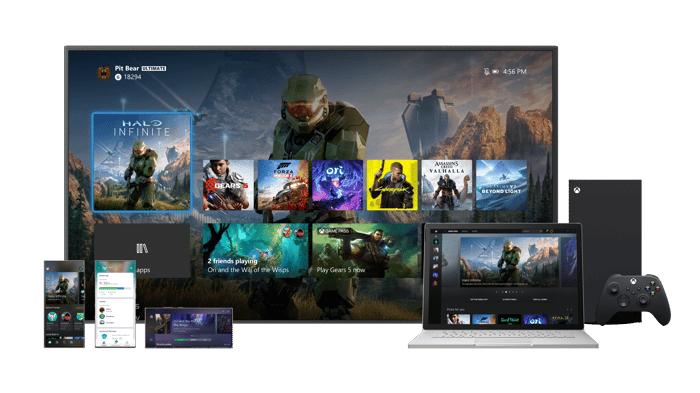 This year, Game Pass Ultimate has grown to 250 downloadable console titles. But now, it also includes Microsoft's game streaming service, which the company refers to as "cloud-enabled" gaming, allowing subscribers to stream 172 Game Pass titles to their Android mobile devices.

The evolution of Game Pass seems to be Microsoft's key to drive subscription revenue for the company's consumer-centered gaming division.

At last count, Microsoft has around 100 million Xbox Live Gold members, with many paying a 12-month subscription price of $59.99 per year. Gold users get two to four free games per month, plus access to online multiplayer. Roughly 10 million subscribers receive Gold as a part of their Game Pass Ultimate benefits.

But for users who only want to subscribe to Gold, and avoid Game Pass, the monthly cost of their subscription is in flux. In July of this year, the company stopped selling the 12-month subscription; now, only one-month or three-month options are available, raising the annual cost of Gold to roughly $100 to $120 per year.

Choosing between paying $5 a month for Gold or $14.99 per month for Game Pass Ultimate used to be a difficult decision. However, with the two services now separated by around $5 per month, Game Pass Ultimate seems to be the obvious choice. We know Game Pass's users get over 250 console games, and 172 games they can stream, plus all the benefits of Gold. Xbox games normally retail for around $60, and older games can run in the $20 to $30 range. Even if we value the 250 console games included with Ultimate at just $20 each, this represents a $5,000 value -- the equivalent cost of 27 years and nine months of a monthly Game Pass Ultimate subscription.

Given the relatively small $5 monthly price gap between Game Pass Ultimate and Gold, and the massive difference in benefits, it seems likely that at least 50% of Gold-only members will end up upgrading. Right now, the 90 million Xbox Live Gold-only subscribers paying roughly $60 a year represents about $5.4 billion in annual revenue for Microsoft. If just half (45 million) of these Gold-only subscribers upgrade to Game Pass Ultimate at $14.99 per month, this would generate about $6.7 billion in annual revenue.

Even if Microsoft loses half of its Gold-only subscribers, the company still comes out ahead by $1.3 billion per year if the other half upgrade.

With Microsoft making significant subscription changes, some investors might worry that competing services could siphon any dissatisfied customers. The good news for Microsoft investors, is neither Sony's PlayStation Now nor Alphabet's Google Stadia seem ready to match what Xbox Game Pass Ultimate offers.

PlayStation Now (PS Now) costs $59.99 per year and gives gamers the ability to stream or download "over 800 PS4, PS3 and PS2 titles." However, this service is limited to the PS4, the PS5, or PC, which means no cloud-based streaming. In addition, to have access to online multiplayer for all games, subscribers will need to pay an additional $59.99 per year  for PlayStation Plus.

There are a few additional benefits that seem to favor Xbox Game Pass Ultimate. While all Game Pass titles can be downloaded for offline play, that's not the case with PS Now, where some titles can only be streamed. Game Pass offers fewer games than PS Now, but reviews from Techradar and Trusted Reviews suggest that Game Pass offers quality, while PS Now offers quantity. In addition, Cloud-based gaming through Game Pass Ultimate means subscribers could buy an Xbox controller, subscribe, and play 172 games without ever buying an Xbox console.

Where Google Stadia is concerned, the service is streaming only, which means no internet connection, no games. While Stadia offers 26 free games as part of its $9.99 per month  Pro service, additional games must be purchased individually. Stadia saves the buyer from paying for a console, but the cost savings are dwarfed by the missing benefits of Game Pass Ultimate. In short, neither PlayStation nor Stadia can offer gamers the Ultimate value.

Microsoft is in the middle of a multiyear strategy of moving its business toward subscription services. As one example, prior to changing its Office software to a subscription model, Microsoft's revenue was lumpy as it sold huge amounts of Office licenses after a new release, then reported slower sales as the initial demand died down. Since changing Office to a primarily subscription-based model in June 2011, Microsoft's revenue and stock price have largely tracked each other. 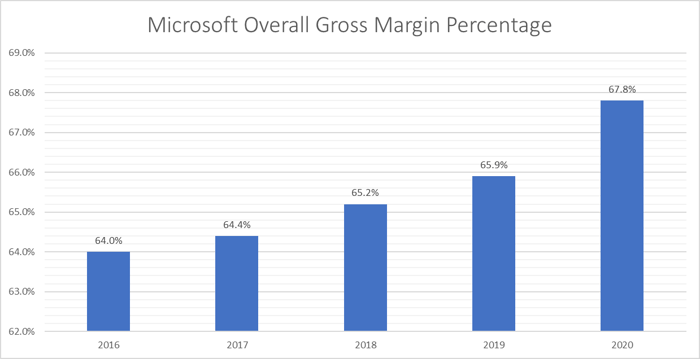 Though  Microsoft doesn't break down Xbox margins, gaming is part of the "More Personal Computing" division. Since Game Pass was introduced in February 2017, it's not surprising that this segment's operating margin has increased each year.

We  can  see that as Microsoft has shifted from one-time product sales, to subscriptions, its overall revenue and margins have grown. This same pattern shows up in the More Personal Computing division since Game Pass was introduced.

Though Microsoft has been on a terrific run over the last few years, Game Pass Ultimate could be a key to unlocking even more revenue from the $200 billion gaming industry. For full-year 2020, Microsoft's gaming operations generated $11.6 billion in revenue.With a less than 6% share of the overall industry, the software giant has an opportunity to grow this business significantly for many years. Investors looking for a growth and income stock should consider this ultimate deal.