The slump in oil prices walloped oil stocks as most sold off sharply last month. Among the notable decliners were leading global producers BP (NYSE:BP), Chevron (NYSE:CVX), and ConocoPhillips (NYSE:COP), which have lots of exposure to Brent. All three oil giants declined by more than 10% in September, according to data provided by S&P Global Market Intelligence. 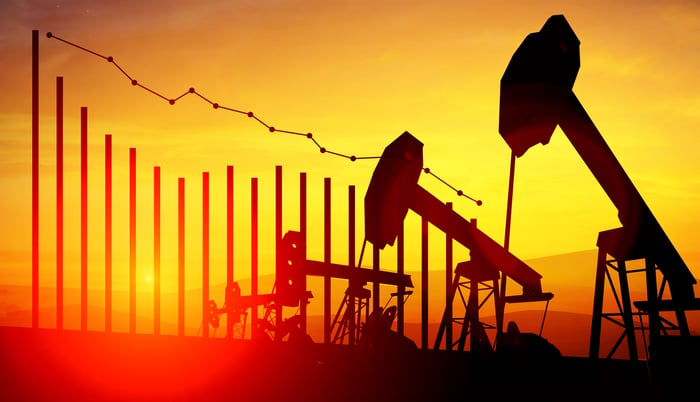 As major oil producers, BP, Chevron, and ConocoPhillips live and die with oil prices. Because of that, when crude prices tumble, so does their cash flow. Thus, all three will likely report weaker third-quarter earnings following last month's decline, since Brent's sell-off pushed it down 0.5% for the quarter. On a positive note, WTI did end the third quarter up 2.4%, which will benefit the U.S. operations of these oil giants.

This year's turbulence caused most oil producers to reevaluate their strategy. BP has basically thrown in the towel on the oil market. The company unveiled its revised long-term outlook on the energy market last month, with a chilling forecast that oil demand has peaked. That's leading the company to shift capital spending from oil to renewable energy. As a result, BP anticipates that its oil output will decline by 40% over the next decade, while its renewable energy production will grow 20-fold.

ConocoPhillips and Chevron aren't going quite that far in their strategy shifts. ConocoPhillips provided investors with a glimpse of what's likely ahead. Despite last month's volatility, the oil market has stabilized a bit in recent months, giving oil companies more visibility into their future cash flows. Usually, that leads them to boost spending on capital projects. But ConocoPhillips chose to bring back its stock buyback program instead, aiming to repurchase $1 billion of its shares during the fourth quarter. That move suggests that the company is prioritizing returning cash to shareholders instead of investing in its oil business' growth.

Meanwhile, Chevron has been tweaking its portfolio following the initial COVID-19 crash in crude oil prices. It tried to jump-start a consolidation wave in the sector earlier this summer by agreeing to acquire Noble Energy in an all-stock deal valuing the target at $13 billion. Meanwhile, last month it reportedly received an offer from EQT (NYSE:EQT) for its gas assets in Appalachia. EQT proposed to pay $750 million for 800,000 acres in the Marcellus and Utica shale as well as an interest in a pipeline company. That's well below the $3.4 billion Chevron paid for Atlas Energy and its position in the region a decade ago. This prospective swap suggests that the oil company wants to focus on bulking up its best assets while cutting its losses on others.

Oil prices slumped last month, which unsurprisingly sent oil stocks lower. However, what has been fascinating to watch this year is how large oil companies are responding to the volatility, which we got a good glimpse of in the moves they made last month. BP has basically had enough, as it plans to slowly pivot away from the sector over the next decade. Meanwhile, Chevron has gone to the other extreme by betting big on oil via its purchase of Noble. Then, we have ConocoPhillips' approach of ramping up shareholder returns instead of its drilling program.

It will be interesting to see which strategic shift ends up paying the most dividends for shareholders in the long run.