These healthcare and retail giants have proven their resilience during a rough-and-tumble year.

The stock market's gallop out of bear territory after the March market crash screeched to a halt this month. After climbing 47% from this year's low point, the S&P 500 has dropped 5.4% since Sept. 1.

But the most seasoned investors won't be afraid of this market correction. Rather, they should look at it as an opportunity. Besides, the stock market has recovered from every single downturn in its history. Market dives offer the perfect opportunity to see which stocks best resist future downturns. Here, I'll talk about three stocks that have held up well this month and are in the perfect position to see revenue growth multiply in the coming years.

Amgen's (AMGN -0.15%) annual revenue growth has slowed over the past few years, as some of the company's older drugs face competition from biosimilars -- the title given to biological medicines made of similar, but not perfectly replicated, elements of living sources. But a new wave of growth is on the horizon.  Amgen's newer drugs like Otezla, a plaque psoriasis treatment, and Kanjinti, a biosimilar of blockbuster cancer therapy Herceptin, immediately come to mind. Amgen's two dozen phase 3 programs in its pipeline are also cause for investor optimism.

In the second quarter, Otezla generated $561 million in sales, a 14% increase from the year-earlier period when the drug was marketed by Celgene, which has since been acquired by Bristol Myers Squibb (BMY 0.31%). Amgen expects Otezla to earn a large portion of sales from the $20 billion psoriasis market, in part because of its convenience. Otezla is administered as a pill, as opposed to a cream or injection, and doesn't require lab monitoring or in-person administration by a physician.

As for Kanjinti, Amgen has said that it's "pleased with the uptake" and doesn't see competition slowing down market share gains. Kanjinti's share of its oncological market is around 35%, according to Amgen.

Recently, Amgen announced positive phase 3 data for a trial of its commercialized cholesterol drug Repatha for a new indication as a treatment for children with heterozygous familial hypercholesterolemia, a genetic disease that involves the early buildup of cholesterol. And results from other late-stage trials are just ahead. The company expects data in the fourth quarter from a phase 3 study of omecamtiv mecarbil for the treatment of chronic heart failure.

Amgen shares slipped 1% this month. That's not a big drop -- especially considering the nearly 34% rebound since the stock's March low. And Amgen has more product revenue ahead, so I wouldn't expect a major decline in Amgen the stock price or the company's sales gains.

While many other companies lost business in the early days of the coronavirus crisis, Teladoc Health (TDOC 0.69%) made gains. The platform for virtual medical visits reported an 85% increase in second-quarter revenue to $241 million from the year-prior period. And total visits climbed more than 200% year over year to 2.8 million.

That's positive. But what's going to happen once the crisis subsides? Though some people will return to traditional medical visits, it's likely that Teladoc will maintain many of the gains it made during the crisis. For example, during its July earnings call, the company said visit volume growth is more than twice the size of its pre-coronavirus pace in states where infection levels are down and doctors' offices have reopened.

The merger with another high growth company -- Livongo Health (LVGO) -- should offer an additional permanent boost. Livongo specializes in the digital management of chronic diseases, with a particular focus on diabetes. Once the two companies combine later this year, Teladoc expects pro forma 2020 revenue to climb 85% to $1.3 billion. And pro forma adjusted earnings before interest, taxes, depreciation, and amortization (EBITDA) for the year should total more than $120 million.

Teladoc shares have slipped 3% this month and are up about 80% since the March low. If analysts is right, the stock could gain 10% over the next 12 months. 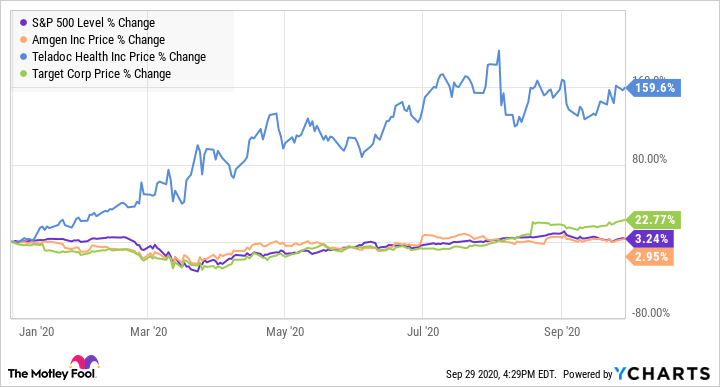 Target (TGT -0.53%) is another example of a company that won business while most others lost sales during the height of the coronavirus crisis. Some might say it's because Target sells a lot of essentials, but there's more to the story than that. Target leveraged both physical stores and its webstore to produce results. More than 90% of sales growth in the second quarter involved in-person stores in some way; examples of in-store sales include a purchase made inside a store or the pickup of a digital order curbside.

As a result, comparable sales climbed more than 24% in the quarter from the year-prior, making for the company's biggest increase ever. And digital same-store sales soared 195%. Importantly, the high-margin category of apparel, which saw sales decline in the first quarter, recovered, and posted double-digit growth. This indicates that consumers weren't only going to Target for emergency needs during the worst phases of the crisis. Instead, they've continuing to flock to the retailer as shopping lists return to normal.

Looking ahead, Target's effort in grocery is another bright spot. The company launched the "Good & Gather" brand a year ago, and it's already reached $1 billion in sales. This fall, the brand will launch another 600 items to bring the product total to almost 2,000. Target has also added fresh and frozen grocery to its pickup and drive up offerings at 85% of its locations nationwide.

Target shares are trading at an all-time high. But I wouldn't let that stop me from investing in this retailer. Target's good use of its stores and digital platform should keep sales rolling in -- and the share price climbing into the future.

3 Dividend Aristocrats You Can Buy Today at a Discount
376%