Is there another market crash ahead? Well, it's safe to say that September has been rocky, with the S&P 500 dipping 4.3%. As coronavirus outbreaks continue around the globe, businesses are feeling the weight of consumer and investor uncertainty. The Nov. 3 presidential election had added new "what-ifs" to the fall; and we all know that the market doesn't like uncertainty.

It's impossible to predict whether the coronavirus crisis will push markets into a true second crash. But investors can still prepare. If you have $10,000 (or even less) to invest, here are three healthcare companies that can protect your portfolio during the worst of times. Why? Each of these giants have product approvals on the horizons and can show evidence of existing revenue growth. They also quickly recovered from the March market crash. Those are good signs for rough times ahead. 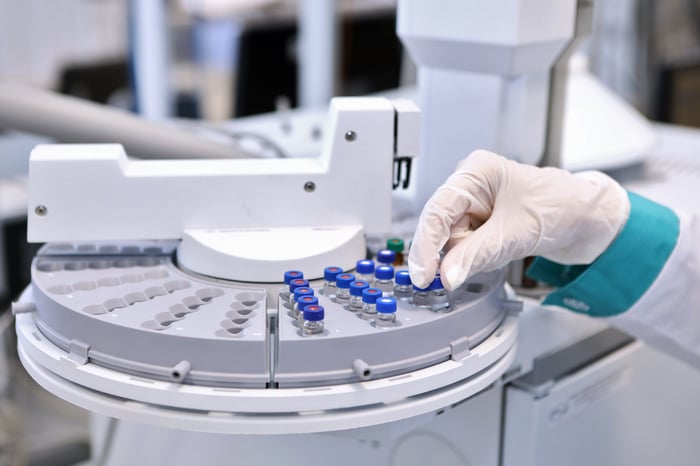 Abbott Laboratories (NYSE:ABT) has had two major accomplishments in the past few months: It's developed six different rapid COVID-19 tests, and it has brought an updated version of its FreeStyle Libre glucose monitoring system to market. Both should offer revenue a lift in the coming months and beyond.

The U.S. Food and Drug Administration (FDA) has granted each of Abbott's COVID-19 tests an emergency use authorization (EUA). The latest is a portable, low-cost, 15-minute test. Abbott plans on delivering 50 million of the new tests each month as of October. So far, the company has provided more than 27 million COVID-19 tests in the U.S., an effort that is starting to show up in earnings reports. In the second quarter, coronavirus diagnostics brought in $615 million of the company's $7.3 billion in worldwide revenues.

Turning to Abbott's diabetes business, the FreeStyle Libre 2 system is big news, in part because the earlier version of the product is one of Abbott's star earners. Sales of other medical devices have recently suffered as doctors postponed procedures during the worst stages of the coronavirus crisis. But FreeStyle Libre remained resilient. The original device's sales rose 36.8% year over year in the company's second quarter. As for FreeStyle Libre 2, its accuracy, extra features, and competitive pricing may win over doctors and patients. Abbott says FreeStyle Libre 2 costs 70% less than competitors' continuous glucose monitoring (CGM) systems.

Abbott shares have gained about 71% from their low on March 23, showing the company's ability to keep winning, even in the middle of a crisis.

While the overall market slid this spring, Seattle Genetics' (NASDAQ:SGEN) stock market woes were short-lived. After a two-week spring slump, the shares were on the move, onward and upward. As of Sept. 30, they're up 71% on the year. Investors have surely been focused on this biotech's new and potential revenue drivers.

Late last year, the FDA approved Padcev for the most common form of bladder cancer. And in April, the agency gave the nod to Tukysa as a treatment for metastatic HER2-positive breast cancer. Tukysa approvals soon followed in Canada, Singapore, and Switzerland. This summer, Seattle Genetics and partner Genmab (NASDAQ:GMAB) reported positive results from a pivotal trial of tisotumab vedotin, a potential therapy for recurrent or metastatic cervical cancer. The companies plan to apply for FDA approval through an accelerated pathway.

Recent approvals are bearing serious fruit. Padcev's second-quarter sales soared 66% to $57.2 million from the first quarter. Tukysa, commercialized for only part of the quarter, generated sales of $15.8 million. And most importantly, Seattle Genetics says it's on the way to total revenue of more than $1 billion for the year.

Finally, a recent collaboration with pharma giant Merck (NYSE:MRK) is another reason to get excited about Seattle Genetics' future. Merck is taking a $1 billion equity stake in Seattle Genetics and signing on to co-develop and eventually co-commercialize ladiratuzumab vedotin. The drug candidate is in phase 2 trials for solid tumors. Merck will also commercialize Tukysa in Asia, the Middle East, and Latin America. Seattle Genetics will receive upfront payments for both projects and is eligible for milestone payments. 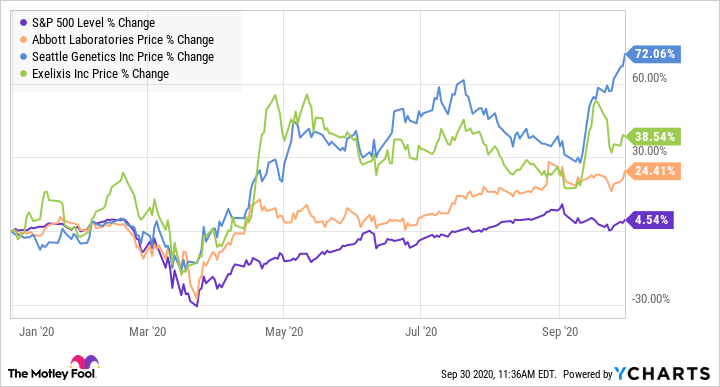 Exelixis (NASDAQ:EXEL) is on a roll with its star molecule, cabozantinib. It's the basis for two of the company's marketed cancer drugs, Cabometyx and Cometriq. Cabozantinib blocks the activity of receptor tyrosine kinases that is responsible for cancer progression. Exelixis is investigating the molecule in more than 70 clinical programs, including nine in phase 3 studies.

The cabozantinib franchise brought in $178.7 million in the second quarter. But greater potential lies ahead if even a small portion of Exelixis's clinical studies are successful. That's because Exelixis is pursuing several major treatment areas, such as prostate cancer and non-small cell lung cancer. The prostate cancer treatment market alone is expected to reach $9.9 billion by 2026, growing at a compound annual growth rate (CAGR) of 4.6%, according to Allied Market Research.

Cabometyx is approved as a treatment for advanced renal cell carcinoma (RCC) and for hepatocellular carcinoma. In fact, Exelixis says it's the most prescribed single-agent tyrosine kinase inhibitor for RCC patients. Most recently, Exelixis submitted Cabometyx as a combination RCC treatment with Bristol Myers Squibb's (NYSE:BMY) Opdivo to the FDA for approval. An outcome there will likely be one of the next catalysts for the company's share price.

Exelixis shares have gained 60% from their March low and are up 38% for the year. If analysts have it right, shares may climb 33% from here within the coming 12 months. Investors looking to pad their portfolios in anticipation of another crash still have time to get in on the action.