In case of a flash sale, scoop up shares of companies that are bound to bounce back.

For long-term investors, market crashes provide opportunities to buy more of the great companies they own at a steep discount. Additionally, they allow investors to finally open a position in overvalued stocks after prolonged periods of sitting on the sidelines. Major indices such as the S&P 500 have always rallied to new all-time highs after every single steep sell-off in U.S. history.

In the short term, however, there is no way to tell until after the fact whether the ongoing market correction will lead to stocks simply rebounding and breaking to new all-time highs, or intensify into a full market rout as witnessed in March. In case of the latter, let's look at three of the best stocks to buy on the dip. 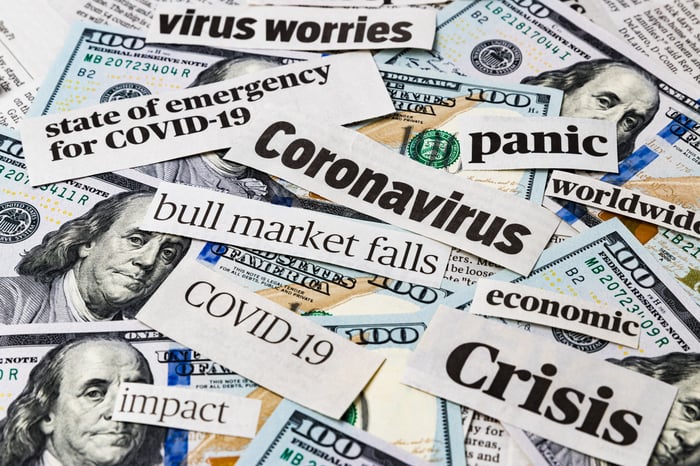 Peloton Interactive (PTON 7.20%) has become one of the leaders in the home fitness industry just one year after its IPO in October 2019. The company's state-of-the-art exercise bikes feature live competitions with other Peloton users in the area and subscription-based coaching on the 22-inch HD touchscreen tablet. Each Peloton bike costs about $2,245, though the company recently announced a price cut to $1,895. Although that may sound very expensive, Peloton's customer base never seems to stop growing. Over the past six years, the company increased its revenue by more than 100% and generated $1.8 billion in sales for its 2020 fiscal year. The company's fitness subscriptions have increased by 107% per year since the beginning of 2017, while the total number of workouts on its exercise bikes has increased by 213% per year. And people under the age of 35 account for 20% of the company's new sales, making this its fastest-growing customer group.

Peloton bikes have outstanding customer satisfaction ratings, and while the stock may seem as expensive as the bikes at 12 times price to sales (P/S), investors are getting a lot of growth momentum for what they pay. In the past year, Peloton shares are up over 215%, turning an investment of $10,000 last September into $31,660 in just 12 months.

1Life Healthcare (ONEM -0.06%) is well positioned with its unique membership model, which blends primary-care service with telemedicine. For a $199 annual fee and extra bills to the customer's health insurance, those who sign up for the concierge health service are guaranteed to have their physicians show up on time for appointments, among other benefits.

Additionally, patients in need of care can see a doctor at a 1Life clinic or urgent care facility within 24 hours. There is also a 24/7 virtual-visit option for subscribers. That puts the company in a superb position to capitalize off the boom in telemedicine, which is projected to grow from a $6.6 billion market in 2019 to $17.1 billion by 2026.

During the second quarter of 2020, 1Life's membership count increased by 25% year over year to 475,000. Simultaneously, the company's revenue grew 18% year over year to $78 million. There are now 96 1Life medical offices nationwide servicing its members, and more than 7,000 enterprise clients have purchased 1Life's health plans on behalf of their employees.

1Life has $664.4 million in cash and investments, more than enough to sustain its current growth rate and offset $234.6 million in convertible debt liabilities. If investors are interested in a solid healthcare growth stock, 1Life is a great option. Since its IPO in January, the company's shares are up about 30%.

Jazz Pharmaceuticals (JAZZ 0.61%) is arguably one of the cheapest stocks in the pharmaceutical sector. Since its approval in 2002, its best-in-class sleep disorder drug Xyrem quickly reached blockbuster status, but its various patents began to expire in 2019 and will continue to do so through 2024. That puts close to $1.8 billion of the company's $2.3 billion revenue at risk of generic competition.

Luckily, the company is quickly diversifying. Since 2015, Jazz has received nine drug approvals in its neuroscience and oncology pipeline, with an additional five potential product launches scheduled for the next year. The company's oncology treatments are expected to generate $525 million in revenue for fiscal 2020.

Jazz is surprisingly cheap for a company that has grown its earnings by 35% per year over the past nine years and generates more than $880 million in cash flow from operations. The stock has a valuation of just 3.6 times price to sales (P/S) and 14 times price to free cash flow. In the past year, Jazz stock has remained mostly unchanged, which provides an opportunity for value investors to pick up shares on the cheap.