NextEra Energy (NYSE:NEE) is a global leader in renewable energy. It produces more power from the wind and sun than any other company in the world. Meanwhile, its current backlog of development projects is bigger than the entire generating capacity of all but two companies. It knows the industry better than most, both its opportunities and challenges.

One of the biggest obstacles hindering renewable energy growth is building enough transmission infrastructure to connect all this power to the grid. It's a problem the company intends on solving by growing its transmission business. It recently took another step in that direction by acquiring GridLiance. 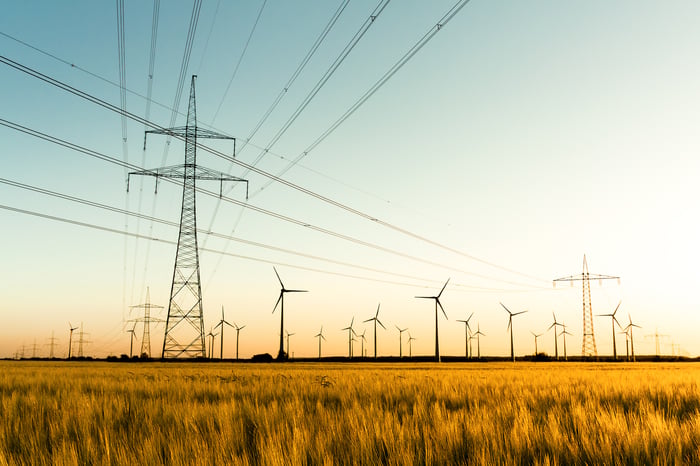 NextEra Energy is paying $660 million, including the assumption of debt, to buy GridLiance from affiliates of private equity giant Blackstone Group. The company currently owns about 700 miles of high-voltage transmission lines and related equipment backed by rates set by the Federal Energy Regulatory Commission (FERC). Its assets include three regional transmission organizations across six states.

This deal does two things for NextEra. First, it adds another regulated asset to its portfolio, which will provide it with another steady stream of cash flow to support its high-powered growth plan. Second, the deal fits well strategically. "GridLiance partners with electric cooperatives and public power utilities to enhance transmission system reliability and is well positioned to benefit from the substantial expected renewables growth over the coming years," according to comments in the deal press release by NextEra CEO Jim Robo. He also stated, "this acquisition furthers our goal of creating America's leading competitive transmission company and is consistent with our strategy of adding high-quality regulated assets to our portfolio."

Why it's important to NextEra and the future of renewable energy

Transmission is a crucial bridge for renewable energy. The best wind and sun resources usually aren't near population centers, so electric utilities like NextEra need to expand and build transmission capacity to move this power from production facilities to the grid.

According to a report by WIRES group, a transmission trade association, the utility industry might need to invest $90 billion by 2030 and more than $600 billion by 2050 on new transmission infrastructure to accommodate the expected growth of renewable energy. That's on top of the investments needed to maintain the existing system and integrate the renewable energy generation built to replace the current power load generated by fossil fuels.

NextEra has been working to turn this investment need from a daunting industry challenge into a value-creating opportunity by expanding its transmission subsidiary, which is already the country's leading competitive transmission company. It develops, finances, constructs, operates, and maintains transmission assets across the continent, focusing on integrating renewable energy and strengthening the electrical grid. It currently has operating assets in California, Texas, and New Hampshire. It also has several projects under development across the U.S. and Canada as it's investing $3 billion in nine regional utilities.

The acquisition of GridLiance will enhance this business by adding operating assets across several more states. Further, it sees strong expansion potential in those regional markets due to the expected growth of renewable energy. That's because GridLiance' High Plains and Heartland subsidiaries operate in Midwestern regions with strong wind resources while GridLiance's West subsidiary is in a solar hotbed. Thus, as companies like NextEra Energy build out new renewable capacity in those regions, they'll likely need additional transmission capacity, which should provide expansion opportunities for GridLiance.

Expect to see a greater focus on transmission in the future

America's power grid can't keep up with the growing output of renewable energy. That issue will become an even greater challenge as the industry continues to build new capacity.

However, where some see a challenge, NextEra Energy sees an opportunity. That's why it's taking another step to build out its transmission business by acquiring GridLiance to enhance its ability to bring the electric grid into the 21st century.