These strong brands -- hurt by the coronavirus pandemic -- are already bouncing back.

Starbucks (SBUX -1.43%) and Nike (NKE -2.30%) suffered in the earliest stages of the coronavirus pandemic as stores closed and consumers stayed home. Today, though, Robinhood investors are betting both companies are on the road to recovery. Starbucks and Nike are among the top 100 shares owned by users of the popular online trading platform. Robinhood investors often seek out stocks with potential for quick gains. But in this case, they've chosen shares that should deliver now -- and in the future.

Starbucks and Nike are strong brands. Loyal customers specifically seek out their products over those of competitors. They took the 28th and 40th spots, respectively, in Brand Finance's 2020 report on the world's top 500 most valuable brands. As businesses reopen and a potential coronavirus vaccine and treatments are on the horizon, these two companies are well-positioned for recovery. Let's take a look at why you should invest $1,000 in Starbucks and Nike. 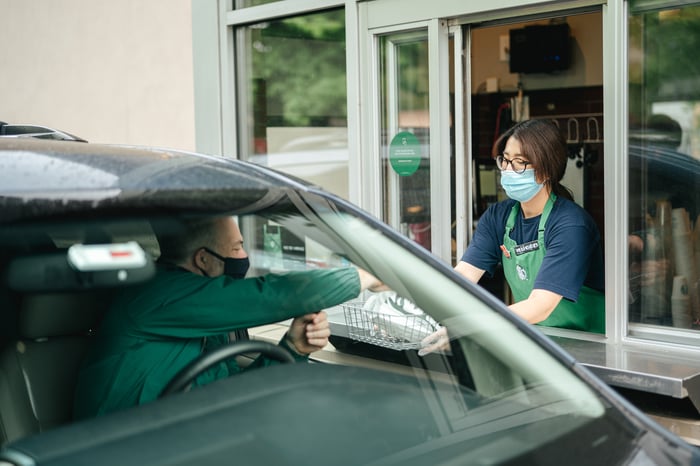 Starbucks CFO Patrick J. Grismer, speaking at a recent JPMorgan conference, said consumers won't be back to a regular routine until a COVID-19 vaccine is available. But he said Starbucks isn't waiting until then to take action. Instead, the coffee shop giant is adapting to what customers want right now.

The company has seen a drop in sales at shops in business centers and an increase in suburban shop activity. That's reflective of consumers stopping out for coffee on breaks as they work from their suburban homes instead of in city offices. Starbucks plans to close 400 stores in the coming 12 to 18 months, and many will be in city centers due to this trend.

At the same time, Starbucks will speed up its development of stores focused on pick up as consumers continue to social distance. Another important move will be the deployment of handheld point-of-sale (POS) devices at drive-thrus. Starbucks is known for its personalized drinks, which take time to create. And that can result in long wait times at the drive-thru. The use of POS devices in the line means order preparation can begin earlier, reducing wait time.

And finally, Starbucks is tackling the issue that held back some customers from joining the loyalty program: the prepaid card. Through the new "Stars for Everyone" initiative, customers don't have to buy a prepaid card. Instead, they can simply pay with a credit card and still earn stars. Starbucks is wise to broaden its loyalty program since members' number of purchases and spend generally increase over time.

After sales sank 38% in the fiscal fourth quarter as stores closed around the world, Nike saw a rebound in the next period. Sales fell only 1% year over year in the fiscal first quarter. And the company sprinted past analysts' average earnings-per-share estimate of 47 cents to instead report 95 cents in the quarter. That's an increase of 10% year over year. Pretty impressive, considering the depth of the coronavirus crisis.

Looking ahead, the future is bright for Nike. That's due to its focuses on digital sales and product innovation. There are a few key details that make me optimistic about the company and the stock.

First of all, Nike isn't new to digital. The company announced a plan to ramp up direct-to-consumer sales back in 2017. Now we're seeing the fruits of the effort. In the fiscal first quarter, even though most stores were open, Nike still posted an 82% increase in digital sales. That's a clear sign that digital gains we saw when stores were temporarily closed weren't just a one-time event. Digital now accounts for 30% of Nike's total business. That's three years early, according to Nike's original plan.

The Nike Training Club app provides Nike with additional traction. The percentage of members using the app for workouts reached an all-time high in the quarter. Use of the app keeps Nike in the forefront of shoppers' minds. Nike said shoppers who connect with the company on at least two platforms spend four times more during their time as a Nike customer than those who don't.

Nike continues to work on using data to offer members the products they want most. That initiative helps the company boost target growth areas like apparel -- and at the same time, provides a way to gain inventory efficiencies.

Starbucks and Nike may face more rough patches as the ongoing coronavirus crisis weighs on consumers' spending and habits. But the companies' efforts during the depths of the crisis and in the current stage have set them on the right path. And that means rewards are likely ahead for long-term investors.