Please ensure Javascript is enabled for purposes of website accessibility
Log In Help Join The Motley Fool
Free Article
Join Nearly 1 Million Premium Members And Get More In-Depth Stock Guidance and Research
By Will Healy – Oct 5, 2020 at 11:32AM

The company can cement strong gains for shareholders at current levels.

When talking about mobile gaming, Glu Mobile (GLUU) is often overshadowed by its bigger rival, Zynga, but the former has built popular franchises and produced compelling growth numbers.

Unfortunately for the stock, the company has failed to fully tie its rising fortunes to its share price. The stock is still down nearly 25% since falling short of market expectations for its second-quarter earnings. However, the fundamentals indicate the stock is undervalued -- let's take a closer look.

Glu Mobile tapped into the potential of mobile gaming early, a market that has grown so quickly that console and PC-focused developers like Activision Blizzard, Electronic Arts, and Take-Two Interactive have also moved to embrace mobile gaming in the past several years.

One forecast from Research and Markets estimates the mobile gaming market will grow about 20% annually through 2026 as smartphone penetration increases among the world population. Even then, Glu Mobile owns franchises that can far outpace the growth of the industry. 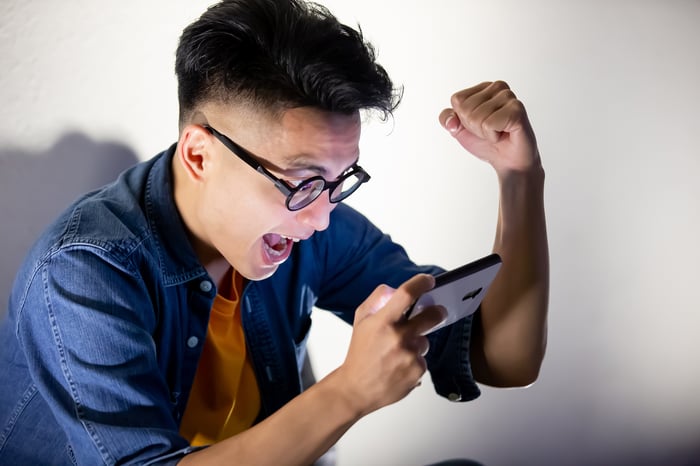 In one recent success, the company partnered with Walt Disney to release Disney Sorcerer's Arena earlier this year. Kim Kardashian: Hollywood also saw a resurgence in the most recent quarter, growing its bookings by 320% year over year. Tap Sports Baseball also logged 20% bookings growth over the same period.

The company has also seen progress with Design Home and Covet Fashion, which increased bookings 47% and 67%, respectively, from the same quarter last year.

Furthermore, Design Home could benefit from further gains. Developers have recently added Design Home Inspired, an e-commerce store within the game. Design Home has been downloaded over 90 million times, and the new in-game store allows players to shop for home décor products that they can have delivered directly to their front doors.

What is holding back the stock?

Glu Mobile grew revenue 40% year over year and bookings 79% in the second quarter. However, despite these seemingly strong headline figures, the company did not meet analysts' expectations. The stock tumbled following the earnings release in early August and has traded in a tight range since then.

Despite that decline, Glu Mobile stock is still up 24% year to date. With those gains, Glu Mobile sells for 17 times forward earnings estimates. This is well below the stock's five-year average forward price-to-earnings ratio of over 30. 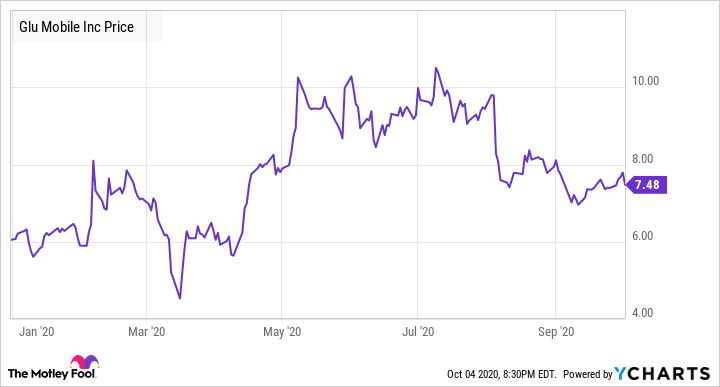 Moreover, it is cheaper than Zynga, which currently supports a forward P/E ratio of around 35. Glu Mobile's valuation appears low considering analysts expect earnings to grow 25% in 2020 and another 25% next year.

Where will Glu Mobile go next?

Furthermore, Glu Mobile continues to position itself for its next stage of growth. In June, a secondary equity offering helped the company increase its cash balance to $283.1 million as of June 30. CEO Nick Earl noted during the latest earnings call, "Our successful capital raise in June significantly expands the universe of potential acquisition opportunities and puts us in a great position to add to our organic growth this year and into the future."

Although Glu Mobile has not announced any acquisitions or new game launches recently, it will need the war chest to avoid falling behind Zynga, which announced an entrance into the hyper-casual gaming market with its purchase of Rollic in August.

Whatever path it takes, Glu Mobile appears positioned to drive shareholder growth and remain influential in the massive mobile gaming market. Investors may want to consider building a position in the stock, while its valuation remains low.