The sector has seen its ups and downs, but some of the most promising stocks out there today are marijuana-related.

The stock market can be the best place to create wealth because of the endless opportunities it offers to grow your money -- you can back anything from value plays to rule-breaking mavericks. Whatever your style, you'll want to put your cash behind companies that can grow their revenue. Some of the most promising can be found in the cannabis sector.

Cannabis is one of the fastest-growing industries across the world. In the U.S. in particular, the sector is expanding at a rapid pace; 11 states and Washington, D.C., have legalized marijuana completely, while 33 states and D.C. have done so for medical purposes. Voters in five other states are voting on some form of legalization in November. 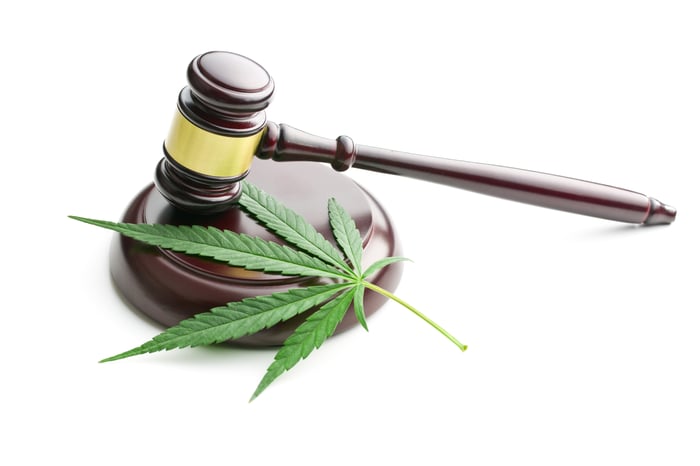 Outside the U.S., Canada is the world's biggest cannabis market after having legalized cannabis flower in 2018 and cannabis derivatives in 2019. Other countries where marijuana is legal or decriminalized include Uruguay, Peru, Spain, and South Africa.

As the legal status of cannabis spreads, the sector in general has done well during quarantine (the Horizons pot ETF is up 6% in the past six months, which is not bad after its 40% decline in 2019). While not every pot-related company is a winner, selecting the right ones can be a surprisingly safe way to add the returns from a booming industry into your long-term portfolio.

There are three broad ways to invest in the cannabis sector. Some companies, such as Canopy Growth (CGC 6.16%) and Green Thumb Industries (GTBIF 0.54%), are involved in cultivating and growing marijuana itself. Others, including Scotts Miracle-Gro (SMG 9.82%), are involved in distribution and retail marketing.

Here are three reasons why the right cannabis stocks make sense for the long haul.

Given all the buzz surrounding the cannabis market and the increasing recognition of the legitimacy of cannabis, the industry is expected to grow tremendously. The market should expand for cannabis both recreationally, because of legalization, but also medicinally, thanks to the wide range of potential benefits and therapeutic applications the herb offers.

According to a report published by Grand View Research, the global legal marijuana market is anticipated to reach $73.6 billion by 2027 -- that's a CAGR of 18%. Another analysis from Cowen shows that "the cannabis market could generate as much as $75 billion in gross annual sales by 2026, up from a prior forecast of $50 billion."

Marijuana's legal status in Canada allows pot companies to be traded freely on the country's market exchanges, and plenty of U.S. and Canadian businesses involved with marijuana are publicly traded on U.S. stock markets as well. (Because marijuana is still illegal on a federal level, "pure-play" marijuana companies do not trade on U.S. markets.) As legalization continues to spread, more and more companies will join the public listings, boosting the sector's fortunes in general.

Lawn and garden care products supplier Scotts Miracle-Gro has shown outstanding revenue increases over the past three quarters. Recently, the company reported a 28% revenue increase to $1.5 billion in the third quarter of fiscal 2020. In particular, sales at its Hawthorne subsidiary -- which focuses on cannabis -- were up 72 percent, to more than $300 million. The company increased its guidance for full-year sales, so this trend looks likely to continue.

Scotts Miracle-Gro isn't the only cannabis-related company to be strengthening even during a global pandemic. Green Thumb Industries, a market leader in terms of revenue, is performing exceptionally well. Based in the state of Illinois, which just legalized recreational marijuana as of Jan. 1, Green Thumb has a presence in multiple U.S. states and positive EBITDA (earnings before interest, taxes, depreciation, and amortization). The company recently reported a net revenue increase of 167.5% year over year.

To the north, Canada's leading pot producer, Canopy Growth, shocked investors with the fourth-quarter earnings it reported in March. The company reported CA$107.9 million in net revenue, representing a 13% loss. However, first-quarter results for fiscal 2021 gave investors hope with a 22% year-over-year revenue increase. Many analysts view Canopy as the top player in the cannabis industry, especially given alcoholic beverage giant Constellation Brands' (STZ 0.13%) 38.6% stake in the company (which it has been steadily increasing).

Canopy Growth has a strong financial position, having improved its free cash flow by more than 50% since Q1. As of June 30, the company had $2 billion in cash and short-term investments, making it one of the top players in the industry.

Revenue for Canopy and others is expected to spike as more states legalize the herb. Those companies playing the game well are a solid bet for the portion of your portfolio you've dedicated to cannabis.

As the revenue numbers above indicate, the cannabis industry has seen steady, robust consumer demand. Across states like Colorado and California, where cannabis is legal for both medical and recreational purposes, business is booming. Despite lockdown orders and more, its status as an "essential item" has allowed cannabis sales to remain strong, with demand even rising across the U.S. market.

For instance, the Colorado legal cannabis market surpassed $200 million in monthly sales in June, and the state set another record in July with $226.4 million, up 13.8%. The most recent state to legalize cannabis, Illinois, reported record monthly sales of $63.9 million in August, up from $61 million in July. The trend is clear: Cannabis products are in high demand.

The future is bright for cannabis

The bottom line is that cannabis stocks are worth investing in -- but you have to choose the right ones. You'll want businesses that can not only survive a crisis but keep themselves positioned to outdo the competition in the future. Any of the three stocks above -- Scotts Miracle-Gro for those who want to stay a few degrees removed from cannabis, or Canopy Growth or Green Thumb for those interested in a more hands-on producer -- look like good bets for cannabis investors now.

Lydia Kibet has no position in any of the stocks mentioned. The Motley Fool owns shares of and recommends Constellation Brands, Green Thumb Industries, and Scotts Miracle-Gro. The Motley Fool has a disclosure policy.

Want Passive Income? These 2 Stocks Are Paying Out
405%