The stock price of the high-growth cloud-based software company dropped quite a bit over the last few days.

Asana's (ASAN -10.21%) stock price dropped more than 10% from its all-time highs since it started trading last week. Should investors take that opportunity to invest in the software-as-a-service (SaaS) work collaboration specialist?

To fuel its growth, the company adopted a land-and-expand strategy: It proposes a free basic offering that it hopes to upsell with paid features as customers expand their use of the tool. As the solution integrates with more than 100 applications, such as Microsoft's communications platform Microsoft Teams, it is also becoming part of enterprises' workflows, which increases its stickiness. 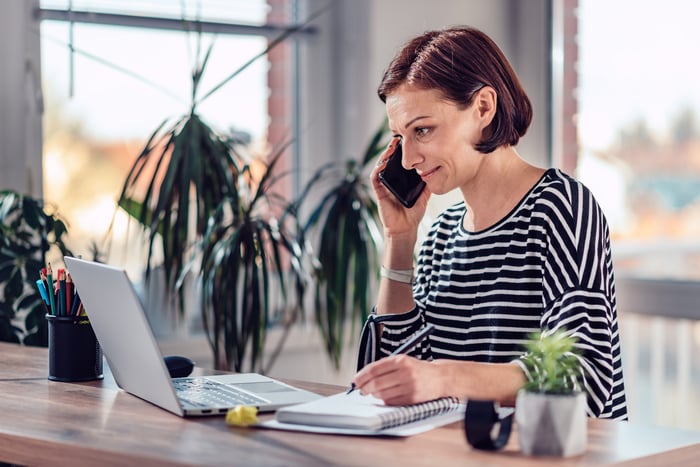 So far, that strategy drove strong results, with revenue growing by 57% to $52 million during the last quarter, which ended on July 31. Looking forward, the company can leverage the 3.5 million free activated accounts it has accumulated to keep growing.

Asana's growth opportunity also seems large. The research outfit IDC estimates that the market for collaborative applications and project and portfolio management will increase from $23 billion in 2020 to $32 billion in 2023. However, you should keep in mind that Asana doesn't address that whole market yet. For instance, it doesn't offer project budgeting features.

Given that attractive situation, the market values the SaaS stock at an enterprise value-to-sales ratio of 17, based on the midpoint of management's full-year forecast revenue range of $210 million to $213 million.

That lofty valuation doesn't seem to take into account the execution risks Asana is facing, though.

The company increased its losses as it ramped up its sales and marketing and research and development expenses to fuel its growth. During the last quarter, losses reached $41 million, compared to $16 million in the prior-year period. And those losses are likely to continue as the company keeps investing to grow. CFO Tim Wan forecast full-year non-GAAP (adjusted) operating losses of $136 million to $140 million, compared to $69 million last year.

Yet as Asana is scaling, management anticipates year-over-year full-year revenue growth to decelerate to 47% to 49%, down from 86% last year.

Granted, with $456 million of cash, cash equivalent, and marketable securities at the end of last quarter, the company can sustain several years of losses before raising cash. But decelerating revenue growth with increasing expenses indicates competition may represent a significant challenge.

Indeed, the market for work management software solutions seems crowded. At the end of 2018, the research outfit Forrester positioned Asana among the three leaders in its "collaborative work management tools for enterprise" category, based on the companies' strategies and offerings. But the competitive landscape remains intense. Forrester's list of 10 contenders didn't even include some important players, such as the SaaS outfit Atlassian and the software giant salesforce.com.

Besides that competitive environment, Asana stock price may face selling pressure in the short term, as it has become publicly traded via a direct listing instead of an initial public offering (IPO). That means insiders don't have to wait for a lock-up period to expire before selling their shares. Predicting such an outcome remains impossible, but given the company's demanding valuation in a challenging context, investors should consider some other growth opportunities.

Why Asana Stock Got Thrashed on Thursday
376%