One of them appears to be the biggest winner right now.

President Donald Trump's COVID-19 diagnosis immediately became the top story in the United States, and perhaps the world, late last week. Political pundits speculated on how it might affect the 2020 election. Some wondered how the president's diagnosis could impact the effort to seat Judge Amy Coney Barrett on the Supreme Court.

But almost everyone who's followed the efforts to develop COVID-19 therapies was interested in what treatments President Trump's physicians would use. Healthcare-focused investors, especially, were interested in this -- since it could signal advantages for the therapies selected. After all, you'd expect that the President of the United States would only receive the best treatments available.

Over the last few days, several details about which drugs are being used to treat President Trump have been announced. Here are the stocks of all the drugmakers involved with the president's treatment. 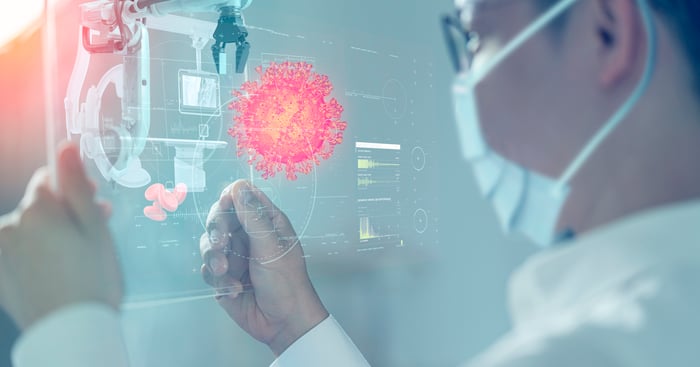 The president's physician, Sean Conley, issued a written statement on Friday that President Trump received one 8-gram dose of Regeneron's (REGN -1.43%) experimental antibody therapy REGN-COV2. This treatment was given to the president before he was taken to Walter Reed Army Medical Center Friday evening.

REGN-COV2 hasn't yet been approved by the U.S. Food and Drug Administration (FDA), nor has it received emergency use authorization. However, Regeneron recently announced promising results from a phase 1/2/3 clinical study, showing that the antibody therapy reduced both viral load in COVID-19 patients and "the time to alleviate symptoms" caused by the novel coronavirus.

Conley's statement on Friday also mentioned several other treatments that President Trump was taking, including aspirin, melatonin, vitamin D, and zinc. Perhaps the most notable of these supplemental drugs given to the president, though, was famotidine. It's sold under the brand name Pepcid by Johnson & Johnson (JNJ -0.06%) as an over-the-counter drug for treating heartburn.

A heartburn drug might seem like a strange COVID-19 treatment. However, there have been a few studies, including a recent one by Hartford Hospital in Connecticut, that indicated some potential benefit for COVID-19 patients. Famotidine has no direct antiviral effect, but some researchers suspect that it could reduce the immune system's inflammatory response.

In a press conference on Saturday, Conley revealed that President Trump received his first intravenous dose of Gilead Sciences' (GILD -1.18%) remdesivir on Friday evening. In May, Gilead received FDA emergency use authorization for the antiviral drug in treating hospitalized COVID-19 patients. The company markets remdesivir under the brand name Veklury.

Clinical studies found that remdesivir reduced the length of stay for hospitalized COVID-19 patients by four days. It also showed promise in potentially reducing deaths of COVID-19 patients. Gilead filed for full FDA approval of the drug in August.

On Sunday, President Trump's medical team disclosed that he began receiving dexamethasone on Saturday. Dexamethasone is a steroid used to reduce inflammation by suppressing the response of the body's immune system. Studies have found that the drug is most effective for patients with severe cases of COVID-19.

Quite a few drugmakers make dexamethasone, which is available as a generic. The biggest companies on the list include Pfizer and Merck.

Are there any things that investors should especially note about President Trump's COVID-19 treatment regimen? One important takeaway is that there is no single COVID-19 therapy right now that's likely to dominate the market. The president's medical team is practically throwing in everything but the kitchen sink to treat him.

Regeneron is arguably the biggest winner for now. The biotech stock jumped around 3% in after-hours trading on Friday, after the news broke that its experimental antibody therapy was being used to treat the president. Regeneron's shares continued their momentum on Monday.

The inclusion of remdesivir (Veklury) in President Trump's treatment seems to underscore that Gilead's drug has become a standard of care in treating hospitalized COVID-19 patients. That could change over time, but Gilead is likely to make billions of dollars from its antiviral therapy over the next year or so.

Perhaps the most important investing takeaway of all, though, is that the COVID-19 pandemic hasn't gone away. Whatever kinds of stocks you invest in, the coronavirus remains a major potential disruptive force.