Please ensure Javascript is enabled for purposes of website accessibility
Log In Help Join The Motley Fool
Free Article Join Over 1 Million Premium Members And Get More In-Depth Stock Guidance and Research
By Rich Duprey – Oct 7, 2020 at 10:46AM

Says he will use money left over from prior stimulus package to keep the industry afloat.

President Trump tweeted out a call for Congress to immediately pass a $25 billion payroll assistance plan for airlines Tuesday night.

Saying there was plenty of money left over from the CARES Act stimulus package. Declaring "Have this money. I will sign now!" the President urged the House of Representatives and Senate to act right away. 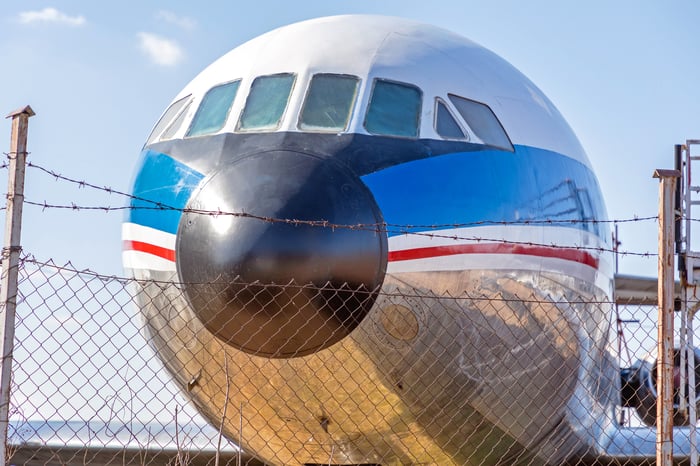 The airline industry is rolling out furloughs of workers as travel and tourism remain depressed due to the coronavirus pandemic. Last week, American Airlines (AAL -1.09%) and United Airlines (UAL -1.30%) began laying off 19,000 workers and 12,000 workers, respectively.

Congress passed a $50 billion bailout package earlier this year, half of which was to help pay airline employee salaries, but that bill expired on Sept. 30.

The White House and congress remain at odds over a more comprehensive stimulus package, with Trump offering $1.2 trillion in aid, but House Democrats pushing for $2.2 trillion. Trump finally ended negotiations until after the election, though overnight he tweeted out a call for a stand-alone package for individuals that would send out another round of $1,200 stimulus checks.

Not all airlines are laying off employees, though. Southwest Airlines (LUV -1.36%) said management was taking pay cuts and that the company would work to negotiate concessions from unions to avoid layoffs. Its revenue is 70% below its typical level.

Delta Air Lines (DAL 0.33%) was able to get 17,000 workers to quit voluntarily while another 40,000 took unpaid leaves of absence. As a result, it doesn't plan to lay off any employees until next year.

The airline industry overall, though, has laid off more than 150,000 workers due to COVID-19.