Few companies have experienced greater long-term success than Amazon (NASDAQ:AMZN). It was a darling of the dot-com boom, but its shares briefly fell into the single digits after the tech bubble burst.

However, over time, Amazon orchestrated a recovery as it dramatically increased its merchandise selection and made an early move into cloud computing. These shifts helped to make Amazon one of the largest public companies in the world. Consequently, its market cap has grown to about $1.6 trillion, and its current share price of about $3,200 per share is a far cry from its low point in the dot-com bust.

Indeed, this retail stock has a history of defying its naysayers. While it's difficult to accurately predict the state of Amazon in 2030, its financials and continuing growth in cloud computing bode well for the company's future.

With the company firing on all cylinders, Amazon appears to remain a buy. The question is whether it can place itself in a better position 10 years from now? 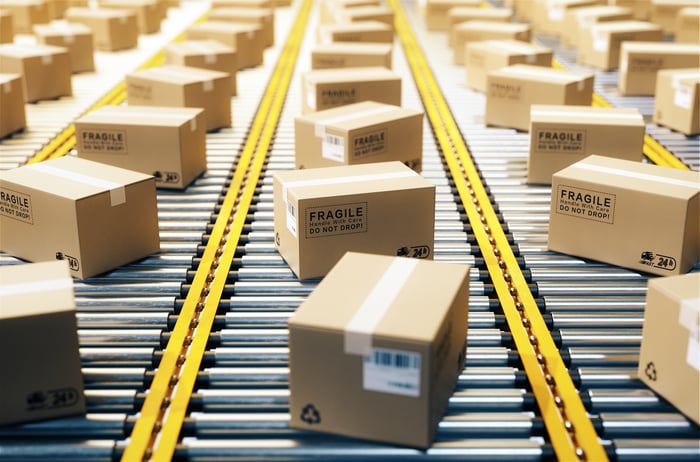 Amazon trades at a forward P/E ratio of about 60. Despite this multiple, Amazon stock is not that expensive, especially considering that analysts forecast 38% earnings growth this year and 40% in 2021. Still, multiples and growth rates tend to contract over time, so investors should expect these numbers to fall.

Also, contrary to what casual observers might assume, most of this growth does not come from its retail arm. Yes, retail made up more than $78 billion of the company's $88.9 billion in sales in the previous quarter. However, the company retained less than $2.5 billion of that revenue as operating income. In contrast, the $10.8 billion in revenue Amazon Web Services brought in last quarter generated more than $3.35 billion in operating income.

Much like retail's profit picture indicates, Amazon investors should also not count on "retail dominance" from a business standpoint.

Yes, Amazon is probably the most successful retailer operating today. Nonetheless, the term "retail dominance" has a history of becoming laughably overblown. Walmart appeared unstoppable when Amazon was just an upstart bookseller. Go back enough decades, and the market power of Sears stoked fear. I expect Amazon to continue growing for the foreseeable future, but given the influence of other retailers, it must remain vigilant to retain its competitive edge.

I would also anticipate AWS's head start in the cloud to continue serving the company well. Pioneering the cloud was a visionary decision on the part of Jeff Bezos.

Nonetheless, like retail, the cloud is too large for one company to truly dominate. Microsoft has emerged as its largest competitor. Also, Alphabet, IBM, and many others are also building a significant position in the cloud infrastructure business. Additionally, the cloud has also left room for the likes of Twilio, Snowflake, and others to carve out niches.

Considering these successes, it is easy to understand why Grand View Research forecasts a 15% compound annual growth rate (CAGR) for the cloud industry through 2027. This bodes well for a stock like Amazon, even 10 years out.

Amazon shows no signs it will lose its influence anytime soon. Moreover, even if growth rates slow over time, its AWS division leads an industry expected to maintain double-digit growth for at least the next seven years.

This also points to AWS becoming more important to the company than it is now. Retail has long remained a competitive, low-margin business. This probabaly means success in retail will only translate into so much success for Amazon stock. The cloud should also remain competitive. However, with double-digit growth predicted for that industry, AWS should see proportionately higher profits.

These increased earnings point to likely growth in the stock for at least most of the next ten years. It will probably also mean more maturing for Amazon, which could lead to cash returns for stockholders. Amazon is the largest company to not pay a dividend. With $71 billion in cash and equivalents on its balance sheet, the company has the ability to offer a payout. Adding a dividend would open Amazon to income-oriented investors.

A 10-year time period is too long to make any firm predictions. Nonetheless, Amazon's financials and business success indicate that it can prosper for a long time to come.