Please ensure Javascript is enabled for purposes of website accessibility
Log In Help Join The Motley Fool
Free Article
Join Nearly 1 Million Premium Members And Get More In-Depth Stock Guidance and Research
By Keith Noonan, Joe Tenebruso, and Will Healy – Oct 11, 2020 at 8:00AM

Find out why these companies could get a boost from a second Trump term.

We asked three Motley Fool contributors to profile a stock they believe will prosper if the Republican incumbent retains the office and continues to shape policy regarding China. Read on to see why they think Cisco Systems (CSCO 1.68%), Lockheed Martin (LMT 0.87%), and Square (SQ 3.77%) could see improved stock performance under a second Trump term. 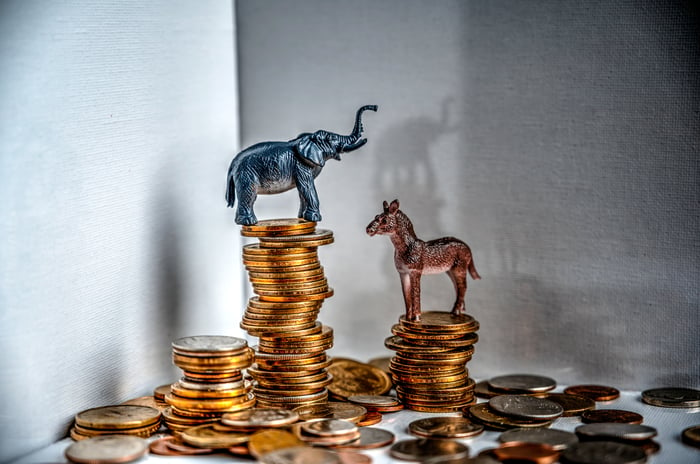 Keith Noonan (Cisco Systems): For a big technology company, Cisco has surprisingly little exposure to China. On the other hand, some people might argue that China has actually had plenty of exposure to Cisco's technologies -- and that the company hasn't been fairly compensated for its intellectual property. The U.S. government alleged earlier this year that Huawei's Futurewei subsidiary had stolen source code from Cisco and used it to make variants of the company's routers.

Even before President Trump came into office and began enacting tougher trade and diplomatic stances with China, Cisco found itself at odds with Chinese competitors. The company has raised claims over the last two decades that Chinese companies have stolen its intellectual property for networking hardware and software, with Huawei being the most prominent alleged culprit.

Another Trump term could limit growth opportunities for Huawei in 5G due to security concerns and strengthen Cisco's position. Securing leadership in 5G is part of Trump's campaign platform, and achieving that might involve closer partnerships between the U.S. government and major networking and telecommunications services companies. This model, which would be closer in line with how China is approaching 5G in some respects, could be a boon for Cisco. Potential catalysts might include expanded government contracts, new tax benefits, and a stronger push to have U.S. companies use domestic networking hardware and software.

Cisco looks non-prohibitively valued trading at roughly 13 times this year's expected earnings and sporting a 3.6% dividend yield, and its stock stands out as an appealing way to stake a position on the evolution of 5G in the U.S.

Joe Tenebruso (Lockheed Martin): Under the Trump administration, tensions between the U.S. and China have escalated to such an extent that political analysts say a new Cold War has begun between the two nations. Against this disconcerting backdrop, President Trump has pushed to keep the military well funded. "My highest duty is to keep America safe," Trump said after signing one of the largest military budgets in history in 2018. "Nothing is more important."

A Trump victory and a corresponding increase in defense spending would be a boon to Lockheed Martin. The aerospace titan produces some of the U.S. military's most important weapons systems.

At the center of Lockheed's armament portfolio lies the F-35 Joint Strike Fighter. The multirole combat aircraft is expected to provide a host of important capabilities -- including air superiority, strike, electronic warfare, and reconnaissance -- to the U.S. Air Force, Navy, and Marine Corps for decades to come. Lockheed is also a leader in helicopters, missiles, and space systems. The U.S. government could potentially spend more in each of these areas if Trump were to serve another term as president.

Thanks to its role as a vital manufacturing partner to the U.S. military, Lockheed has also become a financial powerhouse, with sales and operating cash flow of nearly $32 billion and $4.5 billion, respectively, in just the first six months of 2020. Lockheed's strong cash production has allowed the defense giant to reward its investors with a steadily growing dividend -- which currently yields a solid 2.7% -- and strong share price appreciation over the past decade. I expect more of the same in the coming years, particularly if Trump is reelected.

Square away a stock with no China ties

Will Healy (Square): If Trump wins, investors will like the shape of Square. For one, Square is not in China and has no known plans to bring its ecosystem to that country. So far, Square has not only ignored China but also all of the developing world. For now, it only operates in five countries: Australia, Canada, Japan, the U.K., and the U.S.

Moreover, much of Square's revenue hinges on higher total payment volumes (TPV). TPV continues to rise as society becomes increasingly cashless. Another Trump tax cut would leave more cash in consumers' pockets and likely lead to a further bump in TPV, particularly in the short term. The company confirmed this when it revealed that the stimulus increased the use of Square's Cash App.

Additionally, a Trump presidency plays into the hands of Square. With its recent approval to open a bank, the company will probably face more regulation. Trump has deregulated extensively during his presidency. Since these rules can make operating a business more difficult, a Square Bank would probably benefit from a less stringent regulatory environment. It may also reduce the chances of antitrust action as the company continues to develop a finance ecosystem.

Due to that ecosystem's potential, Square looks poised to bounce back quickly from COVID-19. Analysts expect profits to fall by 30% this year before rising by 114% in fiscal 2021.

At a forward P/E ratio of more than 150, Square is not a cheap stock. However, if Trump wins reelection, investors will have few reasons to sell despite the elevated multiple.