Please ensure Javascript is enabled for purposes of website accessibility
Log In Help Join The Motley Fool
Free Article Join Over 1 Million Premium Members And Get More In-Depth Stock Guidance and Research
By Harsh Chauhan – Oct 13, 2020 at 9:15AM

A stock price turnaround could be in the cards for this optical transport provider.

Ciena (CIEN 0.14%) investors would like to forget September 2020, as the optical networking specialist's shares lost nearly a third of their value during the month, triggered by a mixed set of fiscal third-quarter results.

Ciena's guidance left a lot to be desired. The company warned of a slowdown in deal-making activity, weak order pipelines, and longer timelines to deploy equipment as telecom players decided to play it safe in the wake of the novel coronavirus pandemic. But savvy investors looking to take advantage of the 5G (fifth generation) network rollout should take a closer look at Ciena given its attractive valuation and long-term potential. 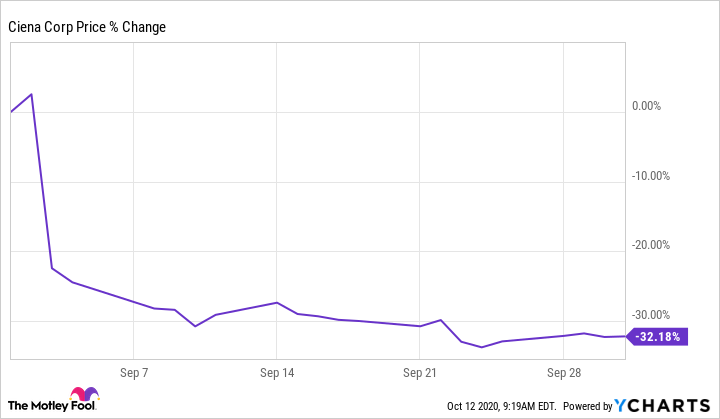 Ciena's discipline should help it weather the headwinds

Ciena stock currently trades at a trailing price-to-earnings (P/E) ratio of just 18, much cheaper than where it was just a couple of months ago and much lower than the five-year average multiple of 54. 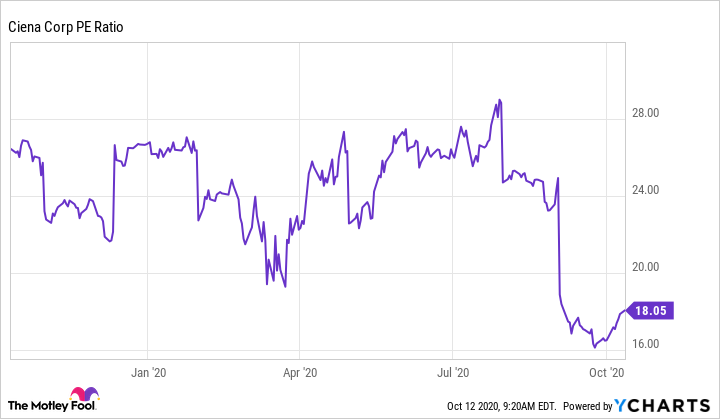 What's more, Ciena's balance sheet should help it sail through the near-term uncertainty. The company exited the fiscal third quarter with $1.16 billion in cash and just over $850 million in debt. Ciena also generated $160 million in free cash flow during the quarter, a metric that has moved north over the past year and a half.

All in all, Ciena has remained disciplined over the years as it has kept its expenses under control and improved operating margin to complement its revenue growth. 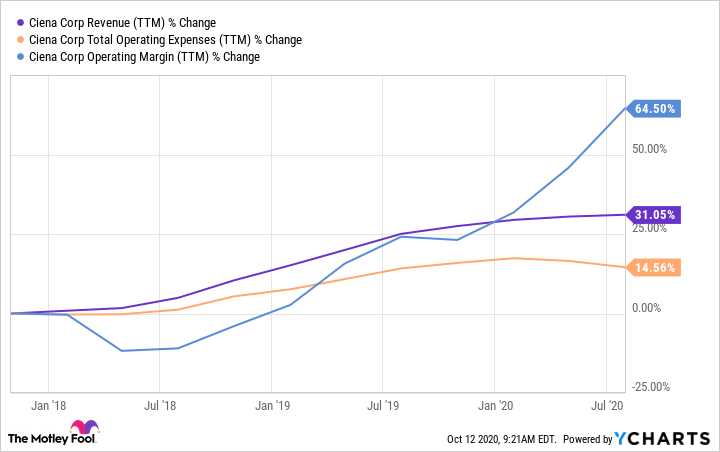 Ciena predicts that its margins will remain steady despite the near-term headwinds. The company delivered an adjusted gross margin of 48% last quarter, exceeding its guidance range of 43%-45% thanks to stronger revenue contribution from existing projects with higher margins. It anticipates an adjusted gross margin of 46% to 48% in the ongoing quarter, which would be higher than the prior-year period's reading of 43.8%.

The company has guided for $255 million to $260 million in operating expenses this quarter, the midpoint of which is well below the $295 million figure it incurred in the same quarter a year ago.

Why now is a good time to buy the stock

By now it is clear that Ciena stock is cheap, and the company seems to have solid fundamentals, creating an opportunity for investors to take advantage of the massive September pullback -- especially as 5G infrastructure investments are still in their early stages.

Ciena has partnered with major telecom operators around the globe to lay optical transport networks so that they can deploy 5G. Optical fiber is going to play a critical role in the functioning of 5G networks, as it supports much higher bandwidth, more connected devices, substantially lower energy consumption, and extremely low latency.

Not surprisingly, the global fiber-optic cable market is expected to more than double from a size of $7.6 billion last year to $16.4 billion in 2025 as per third-party estimates. That's good news for Ciena, as the company controlled 24% of the global optical network hardware market (excluding China) at the end of 2019, according to IHS Markit's estimates. Excluding China, the global optical networking hardware market grew by 6.1% in 2019.

It wouldn't be surprising to see the market contract over the next few months, going by comments made by Ciena management on the company's latest earnings conference call. But we have already seen that the long-term opportunity remains intact, especially because investments in 5G networking infrastructure are expected to boom in the coming years.

Ciena gives investors an opportunity to take advantage of that growth, thanks to its attractive valuation, strong fundamentals, and solid presence in a key market that could turn it into a top 5G stock.