You can profit from several seeming unstoppable trends with these three stocks.

Sure, it takes money to make money. However, that adage scares away some people who don't think they have enough money to even begin investing in stocks.

The reality is that you can get started investing even if you don't have a ton of money to start. Do you only have $500 to invest? Buy these three great stocks to begin making more money sooner rather than later. 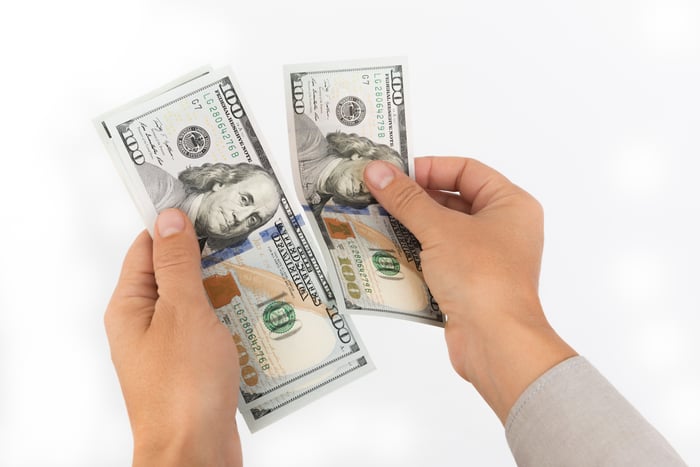 Thanks to Apple's (AAPL -2.54%) recent stock split, you could buy a share for less than $125 at Monday's closing price. Buying Apple (AAPL -2.54%) is like buying a pretty sizable slice of the overall market. The tech stock makes up nearly 7% of the S&P 500 index, a higher weight than any other stock. If the stock market is going up, there's a pretty good chance that Apple is, too.

Apple could be at the cusp of another nice run. The company holds its big Apple Event today, when it's expected to announce its newest iPhone version. This highly anticipated new version will be the first to support high-speed 5G networks.

It's possible that up to 350 million of the close to 950 million current iPhone users will upgrade to the new 5G-equipped model. If so, this launch could be the biggest upgrade cycle in Apple's history.

While the iPhone is still the biggest moneymaker for Apple, the company's services segment has emerged as a top growth driver. Don't be surprised if the 5G launch also creates additional momentum for these businesses.

There aren't many stocks you can buy for well under $500 that allow you to profit from three huge trends -- online gaming, e-commerce, and digital payments. But at only $167 per share at Monday's close, Sea Limited (SE 1.25%) does just that.

Sea Limited generated nearly 56% of its total revenue in the second quarter from its online gaming apps. The company's Garena Free Fire game hit a record-high peak daily active user count of over 100 million in Q2. It's the highest-grossing mobile game in Latin America and in Southeast Asia and ranked No. 3 globally in mobile game downloads.

Around 40% of Sea's total Q2 revenue stemmed from its Shopee e-commerce platform. Shopee stands as the largest e-commerce platform in Indonesia. It ranks No. 1 among shopping app downloads in Southeast Asia as well as first in the region for average monthly active users. The popularity of the platform is also driving increased adoption for its SeaMoney mobile wallet.

Sea isn't profitable yet, and its shares trade at a sky-high price-to-sales multiple of nearly 27. However, with the company's strong presence in three booming areas plus its enviable position in the fast-growing regions of Southeast Asia and Latin America, this stock should be a big winner over the long run.

You might have to find a few extra bucks or buy partial shares of one of these three stocks to fit Teladoc Health (TDOC -3.84%) into a $500 investing budget. But with the healthcare stock trading at around $218, buying Teladoc shouldn't be too much of a stretch.

With Teladoc, you'll own a stake in the top player in the exploding telehealth market. The COVID-19 pandemic has enabled telehealth to really hit its stride, and demand for telehealth won't fade after the pandemic is over. A recent Harris Poll survey found that consumers now view telehealth as "an indispensable part of the healthcare system."

That's great news for Teladoc. The company currently has over 51 million paid U.S. members, a number that should grow significantly as telehealth adoption increases. Teladoc should also become even more attractive to employers and payers when its pending acquisition of Livongo Health (LVGO) closes. Livongo operates a digital health platform for helping individuals manage chronic conditions like diabetes and hypertension.

Teladoc estimates that the combined total addressable market for it and Livongo is around $121 billion in the U.S. alone. The company also has a solid international presence with its telehealth services business. Like Apple and Sea Limited, Teladoc Health appears poised to deliver strong returns that could turn a relatively small initial investment into a lot more money over the long run.