Please ensure Javascript is enabled for purposes of website accessibility
Log In Help Join The Motley Fool
Free Article Join Over 1 Million Premium Members And Get More In-Depth Stock Guidance and Research
By David Jagielski – Updated Oct 14, 2020 at 11:19AM

These value investments can generate above-average payouts for your portfolio. And they're trading at pretty fair prices.

Dividend income can be a great way to boost your portfolio's value over the long term. Amid a recession, it can also be valuable source of cash flow at a time when returns may not be so strong. And in good times, it can pad your total returns.

Amgen (AMGN 0.66%) and Kroger (KR 1.25%) are two companies with shares currently selling at fair prices and that pay better than the 2% yield you can expect from the average S&P 500 stock. Let's take a closer look at why investors should consider scooping up their shares today. 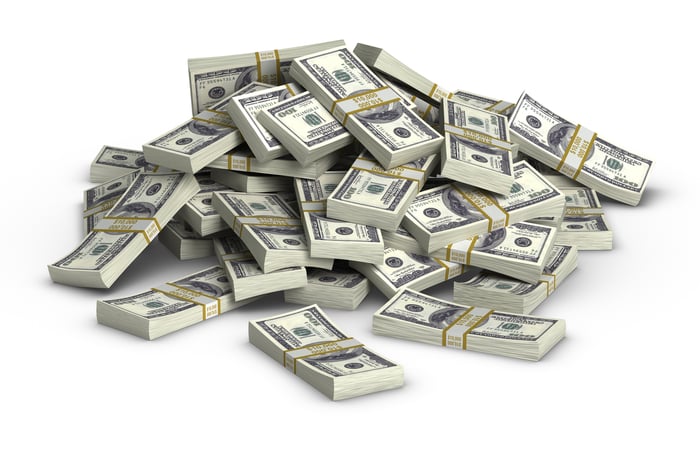 California-based drugmaker Amgen has had a so-so year in 2020; its share price has remained relatively stagnant while the S&P 500 has risen by about 9%. But this is the type of stability that value investors like to see, especially in the middle of an economic recession. The company showed a lot of resilience when it released its second-quarter results on July 28. For the period ended June 30, sales of $6.2 billion represented 5.7% year-over-year growth.

Amgen benefited from the addition of new products, including Otezla, which it acquired in 2019 from Celgene for $13.4 billion. The drug, a treatment for psoriasis, generated $561 million in revenue in Q2 (it wasn't yet contributing to Amgen's top line in the same period last year). The total increase in revenue for Amgen during the period was $335 million.

The good news is that these numbers came amid a period plagued by shutdowns, hospitals deferring medical procedures, and people refraining from visiting the doctor's office. When the company releases its third-quarter results later this month, its numbers could look even better now that stay-at-home orders have been eased in many areas and people have started returning to their medical providers.

Amgen has posted a profit in each of its past four quarters and sports profit margins north of 20%. Its financials can afford to take a small hit amid the pandemic, which should give give investors confidence in Amgen's long-term ability to pay dividends. Amgen hasn't just paid a dividend consistently -- it's increased its payouts for nine years in a row. The most recent hike came in Dec. 2019, when Amgen bumped up its quarterly payments by 10% to $1.60. Today the dividend is yielding 2.7% annually. On a $25,000 investment, that would generate approximately $675 in annual dividend income, which could increase over the years if Amgen continues its strong results.

Shares of Amgen are currently trading at a price-to-earnings (P/E) multiple of just under 20. That's pretty cheap compared to the average stock in the Health Care Select Sector SPDR Fund, which trades for around 24 times earnings.

Grocery store giant Kroger is another appealing stock for value-oriented investors. Its P/E ratio is even cheaper than Amgen's at a multiple of just 10. That's minuscule compared to big-box competitor Walmart, which trades at 23 times its trailing earnings.

The Ohio-based business is coming off a strong showing in its second quarter, which it reported on Sept. 11. Its sales for the period ended Aug. 15 totaled $30.5 billion, and grew by 8.2% from the prior-year period. And when excluding fuel, sales were up 14.6%. The company's online business showed strong results, growing by 127% as more customers choose to buy online and pick up purchases curbside or receive goods at their door. Kroger offers delivery for a flat fee of $9.95 and offers no-contact delivery options. The company says that it can reach 98% of its customers through its thousands of pickup and delivery locations across the country.

Kroger is well-positioned to handle the contactless world of COVID-19, and that's one reason why it was able to come away with a strong Q2 result -- its operating profit of $820 million more than doubled last year's Q2 operating profit of $559 million. Like Amgen, Kroger's had no difficulty posting a profit in each of the past four quarters -- although its profit margin has been narrower, typically coming in at 2% or less.

Here's a quick look at how the two stocks are doing thus far in 2020: 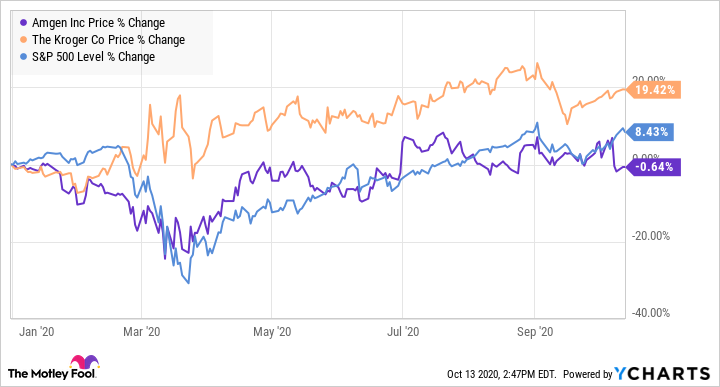 Since Kroger has benefited from a surge in grocery store activity amid the pandemic, it's not a big surprise that its stock is performing better so far on the year. However, I'd be hesitant to invest in a stock that's enjoyed what may prove to be a temporary bump up in sales. As concerns surrounding COVID-19 (hopefully) subside, Kroger may see sales start to come down to normal levels once panic-buying stops.

Amgen pays a better dividend yield and has stronger profit margins than Kroger. And although it may not be as cheap of a buy as Kroger is today, there's plenty of potential for the healthcare company to grow and continue increasing its dividend payments, especially armed with drugs like Otezla that are making its product line-up that much stronger.

Walgreens and Kroger Limit Purchases as COVID-19 Outbreak Gets Worse