Investors have been hearing about Apple (NASDAQ:AAPL) working on a HomePod Mini for years, following the original HomePod's flop. Announced in mid-2017 and launched in early 2018 at $350, the HomePod failed to gain traction in a booming market for smart speakers. Apple was the No. 6 player in the smart-speaker market in 2019, with just a 4.7% market share, according to Strategy Analytics. 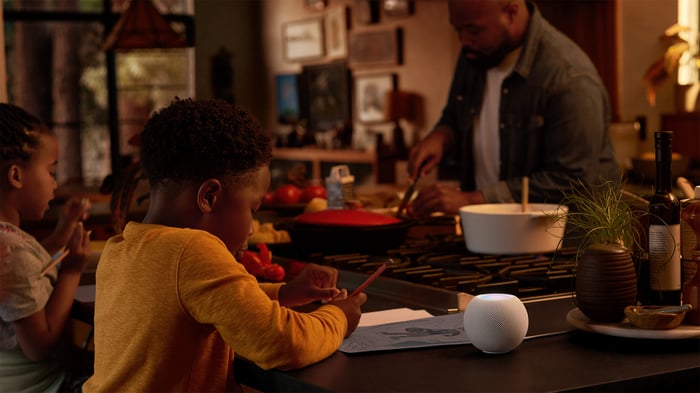 Amazon is widely credited for essentially creating the smart-speaker market with the original Echo, and the e-commerce tech giant has been able to defend its position admirably over the years.

Priced at $99, HomePod Mini is comparable to the flagship Echo. But HomePod Mini is just the second addition to Apple's smart-speaker lineup, while Amazon has spent years expanding its Echo portfolio to address an increasing array of price points and use cases. The lineup ranges from the $50 Echo Dot all the way up to a high-fidelity $150 Echo Studio, complemented by a handful of smart displays, a category that was derived from smart speakers. Google's Nest is also mostly following in Amazon's footsteps.

While Apple likes to say that it doesn't care about being the first to market as long as it can be the best once it gets there, the Mac maker is also keenly aware of how powerful lock-in effects can be. As Apple lagged its smart-speaker rivals, consumers have invested heavily in competing smart-home ecosystems, buying numerous Echo and Nest gadgets to place throughout the home to control and automate various third-party smart-home products.

Some of those third-party smart-home devices might be compatible with Apple HomeKit, but not all. If a consumer is already entrenched in either Amazon's or Google's smart-home platform, then switching to Apple's could cost a considerable amount of money. Apple, Amazon, Google, and Zigbee partnered almost a year ago to create a new open-source smart-home standard that could help address some of this fragmentation, but that standard isn't set to launch until next year. As a laggard, a universal standard would help Apple the most.

Amazon led the smart-speaker market in the second quarter with a 21.6% share, followed by Google at 17.1%, according to Strategy Analytics. Baidu came in No. 3 with 16.7%, and Apple is not mentioned.

Using smart-home technology and accessing music-streaming services are the top two use cases for smart speakers. One of the knocks against the original HomePod was that it only directly supported Apple Music. Apple is planning to add support for SiriusXM's Pandora and Amazon Music, but not Spotify. Spotify subscribers  -- all 138 million of them -- have little use for a HomePod Mini.

Between entrenched users and the exclusion of the most popular music-streaming service, the HomePod Mini will have limited appeal to much of the market.