The value stock has proved that it's sticking around for the long haul.

Investors shouldn't expect quick sky high returns from healthcare giant Johnson & Johnson (JNJ -0.18%). In 2020, many investors are probably happy if they've managed to avoid losing a significant chunk of their investments. Even though the markets are doing well of late, many healthcare stocks are still struggling amid the COVID-19 pandemic. For example, shares of drugmaker Merck are down 12% year to date -- and that's still better than biotech stock Arrowhead Pharmaceuticals, which has plummeted 29% over the same period. The lesson of 2020 is this: Whether we're in a bull or bear market, investors need to be diligent when choosing which stocks to invest in for the long-haul, because some stocks are tougher to break than others.

Johnson & Johnson is one of the safer stocks you can invest in, no matter the current climate. Its consumer health brands, including Aveeno, Neutrogena, and Band-Aid, are popular all over the world, and its diverse segments ensure that its financials remain stable, making the stock an attractive long-term investment. Johnson & Johnson is resilient in good times and bad -- even during a global pandemic. Let's take a look at how much you could've made if you bought shares of the company back in January. 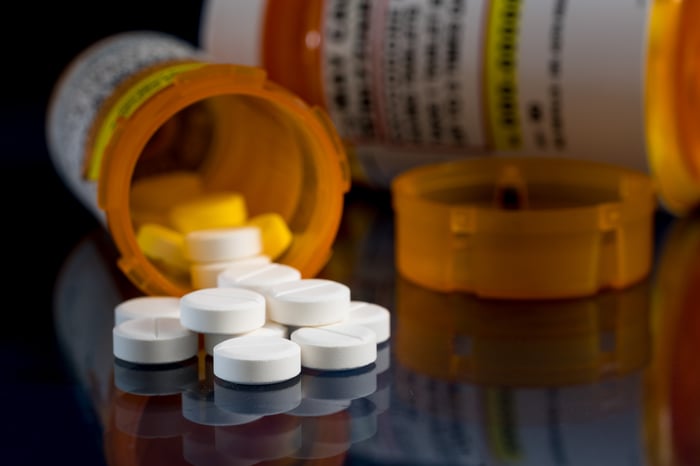 Could Johnson & Johnson have made you a millionaire?

Johnson & Johnson won't make you a millionaire -- at least, not in the short term. The main attractions of Johnson & Johnson as an investment are its long-term stability and diverse portfolio of medical services and products. The company has also earned the title of Dividend King, which means that it has increased its payouts for more than 50 years in a row. In April, Johnson & Johnson raised its quarterly dividend payments by 6.3% to $1.01 per share. That comes out to an annual yield of 2.7% -- well above the S&P 500 average of 2%.

How has the stock stayed afloat in 2020?

A few of Johnson & Johnson's business segments have definitely benefited from stay-at-home orders and stock-up purchasing trends. Consumers have been loading up on day-to-day essentials like vitamins and pharmaceutical products. On Oct. 13, the New Jersey-based company released its third-quarter earnings for the period ended Sept. 30; its sales remained consistent, with worldwide revenue of $21.1 billion having risen 1.7% year over year. Medical device sales dropped 3.6% to $6.2 billion as procedure delays and deferrals at hospitals continued. However, other segments continued to grow, including pharmaceuticals, its largest segment, which recorded revenues of $11.4 billion -- up 5% from the prior-year period.

And the company is optimistic about the rest of the year, slightly raising its guidance from July. Johnson & Johnson now expects its reported sales to fall within a range of $81.2 billion to $82 billion for the full year. That's up from a previous forecast of $79.9 billion to $81.4 billion. Although it's not a huge change, the move signals internal optimism about what's to come.

Another reason why the stock has fared well in 2020 is that Johnson & Johnson has been working on a vaccine candidate for COVID-19. In September, the company began phase 3 trials with plans to enroll 60,000 participants. Interim results from the drug's phase 1/2a trials showed that it was so far safe and effective, with most adverse events considered mild or moderate. The vaccine candidate, JNJ-78436735, also "induced a strong neutralizing antibody response in nearly all participants aged 18 years and older and was generally well-tolerated."

However, clinical trials haven't been totally smooth. On Oct. 12, the company announced that it would temporarily pause the clinical trials after one participant developed an unexplained illness. Vaccine developer AstraZeneca (AZN 0.95%) also recently paused its trials in September after an unexplained illness occurred in one participant. And while AstraZeneca has resumed its trials in other parts of the world, the U.S. Food and Drug Administration (FDA) is still looking into the issue. At this stage, it's too early to know when Johnson & Johnson may resume its trials. 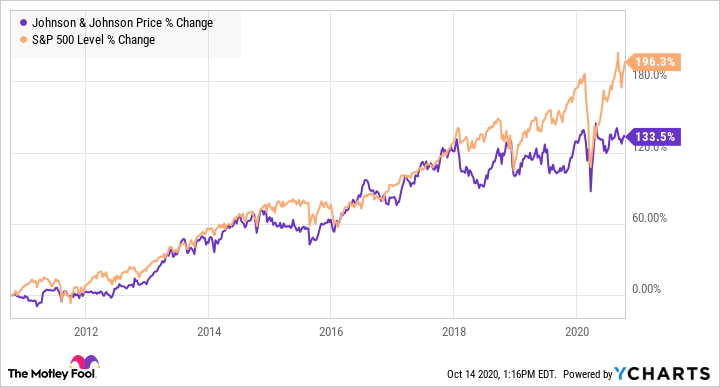 Is Johnson & Johnson a buy?

If you're a growth investor expecting a $1,000 investment to turn into $5,000, then Johnson & Johnson stock probably isn't for you. Over the course of 10 years, Johnson & Johnson shares are up over 130%, which would have more than doubled your investment over that time. But it's still nowhere near the 200% returns the S&P 500 has generated over the same period. The real value in Johnson & Johnson is apparent in its stability and increasing dividends. If you're looking for a stock that can double your money and aren't ready to wait a decade or longer for that to happen, you're better off looking at other investment options.