Streaming-video leader Netflix (NASDAQ:NFLX) reports earnings this week. Yet no matter if the company beats or misses expectations, investors should be wary regarding Netflix's long-term future.

While I'm still a shareholder, I've been selling down my stake over time as the stock has surged to near-all-time highs, and it's currently an extremely small part of my personal portfolio. That's because I see not one, but several concerns that Netflix shareholders will have to contend with over the next few quarters and years. 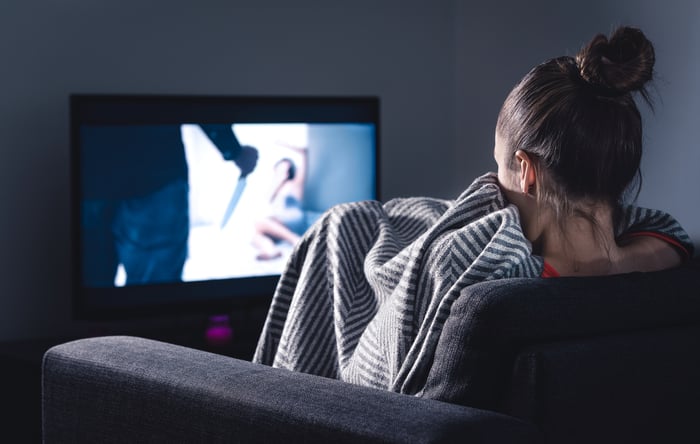 Concern No. 1: U.S. streaming is saturated

While many analysts remain bullish on Netflix, not all are. The best contrarian case comes from research firm MoffetNathanson, which recently put out a note saying that U.S. streaming growth could slow dramatically going forward, since streaming services have already penetrated 75% of U.S. households.

Investors had seen Netflix's U.S. subscriber growth moderate in recent years, before the coronavirus pandemic reaccelerated it. In fact, paid net additions actually fell in the second quarter of 2019, in part due to seasonality, and then grew by less than 1 million for the next two quarters before COVID hit.

Management has often given an ultimate addressable U.S. market between 60 million and 90 million households. Netflix is already nearing the middle of that range, at 72.9 million subs, as of the second quarter (with a likely increase last quarter), leading some to question how much U.S. sub growth is left.

Of course, many investors will point to Netflix's international opportunity, as that segment continues to rack up net additions at a solid pace.

However, overseas customers are lower-revenue customers than those in the U.S. Last quarter, while U.S./Canadian subscribers paid an average $13.25 per month, the average Europe, Middle East and Africa region subscriber paid an average of $10.50, Latin American customers paid just $7.44, and Asia Pacific (APAC) customers paid $8.96. Even more of a concern, the average revenue per user (ARPU) declined in both Latin America and APAC, and these two regions were the highest-growth in terms of subscribers.

That will likely mean that overall sub growth won't translate into as much revenue growth going forward. Furthermore, that trend may be exacerbated by the next concern.

Concern No. 3: Competition is here, and more is coming

Impressively, Netflix has continued to gain subscribers, even as well-funded tech giants have entered the streaming race, traditional studio suppliers have taken back content and launched their own services, and other free substitutes, such as Tik Tok, have emerged. Through it all, Netflix's stock has continued to rise as the company held subscribers while raising prices.

Recently, though, some of the newer players may be capturing more interest. According to media consulting-group Kantar, NBCUniversal's Peacock grabbed a leading 17.2% of all new streaming subscriptions in the third quarter. Meanwhile, Netflix only came in sixth place in the study -- though that admittedly might be because so many already subscribe to Netflix in the first place. For what it's worth, Kantar expects Netflix's overall U.S. subs to remain relatively flat in Q3. Meanwhile, there are even more services coming, with ViacomCBS (NASDAQ:VIAC) set to launch its own megabundle Paramount+ next year.

I'm not concerned that Netflix will remain the leader in the streaming space. However, there is a concern that with so many options, consumers may sign up for a service for a specific show, then cancel and rotate to another service, leading to higher overall churn. Netflix makes it hassle-free to sign up and cancel whenever someone wants, which may hurt it in that environment. And lower-cost, ad-supported platforms could affect Netflix's ability to raise prices.

Concern No. 4: What happens when we get a vaccine?

Finally, it's possible we will get a COVID-19 vaccine soon, just as Netflix is reaching the upper limits of U.S. households and competition hits its stride. In that case, customers may be looking to indulge their pent-up demand for travel and out-of-home experiences, which could be bad for the entire sector. Netflix also doesn't rely on advertising dollars, so it won't benefit as much from a bounce back in the economy.

With a market cap of $240 billion and a valuation of 62 times forward earnings estimates, Netflix may not be priced for total perfection but certainly continued good news. While Netflix, the business, is probably operating as well as it possibly can, Netflix, the stock, has to overcome all four of the above hurdles, and I'm skeptical it can avoid all of them at once. As such, I'm cautious on my small Netflix allocation today, and may look to trim it further if there's a post-earnings bump.