It's no longer a secret that the software-as-a-service (SaaS) business model has huge advantages. It costs next to nothing to give a new customer access; upgrades are the norm; and wide moats form via both high switching costs and network effects.

It's no wonder, then, that Veeva Systems (NYSE:VEEV) -- a SaaS company that caters primarily to large pharmaceutical players -- has seen its stock return more than 1,100% in the past five years. Could there be other healthcare SaaS stocks capable of returning such figures?

Today, we'll examine Health Catalyst (NASDAQ:HCAT), a SaaS company that aims to partner with hospitals and other healthcare organizations to improve outcomes. As you'll see below, while Health Catalyst has a lot going for it, Veeva might not be the best comparison. Here's why. 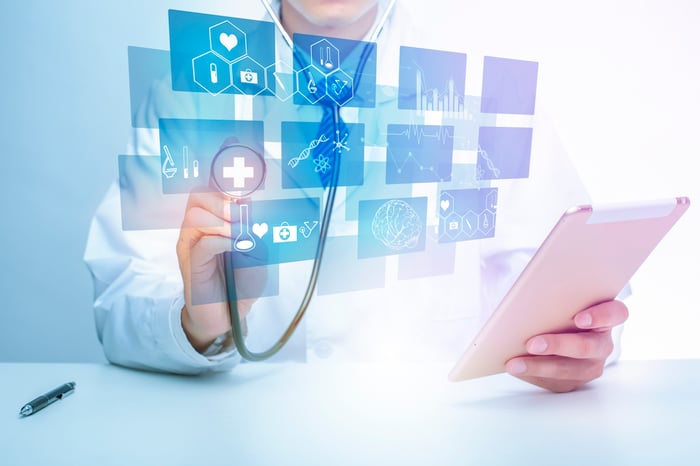 A quick primer on Health Catalyst

Before diving in, it's worth covering what Health Catalyst does from 30,000 feet. The company's mission is "to be the catalyst for massive, measurable, data-informed healthcare improvement."

What does that mean in real life? Health Catalyst partnered with one hospital system to help streamline the collection of data on patients who entered with heart failure. The old way of collecting that data was time-consuming. By using the company's technology, the amount of time devoted to this task fell 50%, freeing up "52 extra days that registered nurses can spend seeing patients each year." That's a big deal.

The company claims that healthcare organizations that have signed on for one to two years can expect to see six such improvements in a year. Those that have partnered with Health Catalyst for as many as five years realize 25 such improvements ... every year! Clearly, the switching costs become very high when there's that pot of gold at the end of a five-year tunnel.

Where Health Catalyst deviates from Veeva

The company does business through a three-pronged approach:

As you can see, the business has been quite popular in the past three-plus years.

The dollar-based net retention (DBNR) number is particularly important. This metric filters out the effect of new customers, focusing only on whether existing customers stay on board (if all of them do, that's 100% DBNR) and if so, whether they are spending more every year (which pushes DBNR over 100%). At Health Catalyst, DBNR hovers near 110%, meaning the company not only holds onto its clients but also gets them to spend more (probably on further adoption of apps) every year.

That's very similar to the way Veeva functions. The company has a veritable alphabet soup of apps that help drug companies bring something from the idea stage through clinical trials to the market. But there's a key difference: Health Catalyst's professional service revenue (read: consulting) is a much bigger slice of the pie.

At Veeva, such services make up less than 20% of revenue. At Health Catalyst, it's more than double that -- roughly 45% of sales.

This ends up being a double-edged sword. Gross margins for professional services (18.6% in 2020) are much lower than those for subscription technology (67.9%). But Health Catalyst probably wouldn't be able to boast about helping out so many organizations were it not for the consultants it has on hand. Furthermore, the human relationships that are formed as a result lead to familiarity, which furthers the moat around the company in the form of high switching costs.

Does that make Health Catalyst a buy, sell, or hold?

For now, I'm impressed with Health Catalyst, but not enough to buy shares myself. The company has been hurt by squeezed hospital budgets because of COVID-19. That said, I don't think such an effect will last forever. Instead, I'm waiting to see the company prove it can sustain positive free cash flow before giving it serious consideration.

Of course, when that time comes, the stock's price could be significantly higher. I'm willing to take that chance. But for investors who are less risk-averse, Health Catalyst could be an excellent choice -- and at just $1.4 billion in market capitalization, it might just provide Veeva-like returns moving forward.

Could This Healthcare SaaS Stock Be the Next Veeva Systems? @themotleyfool #stocks $HCAT $VEEV Next Article
Current