Canadian cannabis cultivator Tilray (NASDAQ:TLRY) is in many ways a prototypical pot company: It's unprofitable, its international value chain is overbuilt, and it competes in a handful of major cannabis product segments. All of that means Tilray's stock price rides on dreams of the cannabis market's future rather than sound fundamentals. Nonetheless, Tilray is well-known because it was the first cannabis company to have an initial public offering (IPO) on an American stock exchange.

It's no secret why the company still captures the imaginations of cannabis investors: Tilray has formidable infrastructure devoted to global production and distribution of cannabis, and it also has an abundance of research and development activity to fuel its future growth. But the stock has so far failed to deliver for its investors, leaving many to wonder whether the company is capable of overcoming its issues with profitability anytime soon. As it turns out, Tilray's competitive strategy isn't very similar to those of other cannabis companies -- and that just might make all the difference for its long-term performance. 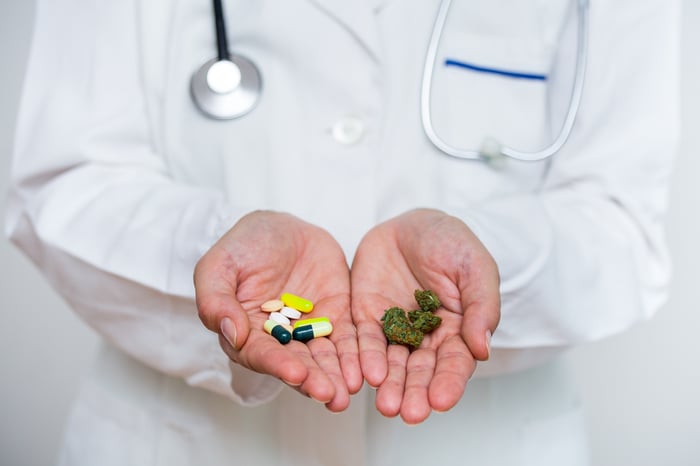 Tilray may flourish as a medicinal-use-first company

Tilray seeks to establish itself as a leading medicinal marijuana company, and it is currently conducting at least 10 different clinical trials in conjunction with a handful of different medical centers and universities. This differentiates it from more established cannabis companies like Aurora Cannabis (NASDAQ:ACB) and Canopy Growth (NASDAQ:CGC), both of which compete in the recreational segment as well as the medicinal one. While Tilray does produce a small arrangement of adult-use products for Canada and Uruguay, its larger project is to serve the global medicinal cannabis market across 41 countries.

This may well change as the company's therapeutic development efforts start to bear fruit. Recently, Tilray reported favorable clinical trial data indicating that chemotherapy patients experienced lower levels of nausea after taking capsules containing a mixture of the company's cannabis. While the market's reaction to this news was muted, the trial does provide empirical evidence that Tilray's medicinal products are capable of helping real people with serious medical problems. In the long term, the company aims to expand its offerings of advanced medicinal products, which it sees as having a high margin and broad appeal in international markets.

Becoming profitable will still take more work, but cultivation in Portugal may help

Like many of its peers in the marijuana industry, Tilray has struggled to become profitable and to scale its operations to the level of demand for its products and the costs of cultivation and manufacturing. The company's trailing-12-month revenue was about $200 million, in comparison to its cost of revenue of $236 million and operating expenses of $208 million. In May, the company closed one of its cultivation facilities in Canada, which it claimed would save about $7.5 million over the course of a year. Tilray's CEO is aiming for the company to be approaching profitability by the end of this year, but closing production facilities alone probably won't be enough to bridge the gap between its costs and its revenues.

Despite this issue, Tilray has a powerful card up its sleeve. Unlike its competitors, Tilray is focused on increasing its sales in the E.U. rather than the U.S. While the company has production and distribution facilities scattered around the world, its cultivation and processing center in Portugal is its largest, with 2.7 million square feet of space. By producing cannabis in Portugal, Tilray gets the right to export its products to the rest of the E.U. without facing tariffs -- a tremendous cost advantage. So, even if Tilray isn't breaking even yet, it's ready to take advantage of both cannabis legalization and increasing acceptance of medicinal cannabis in the E.U.

Is Tilray worth buying over other cannabis stocks?

Future competitive advantages aside, investors should be aware that Tilray has started to issue new stock to raise cash, generating $227 million in the past 12 months. This means that people who purchase the company's stock right now may face dilution of their equity, especially if it takes longer than expected to reach profitability.

In my view, Tilray is the strongest of the popular cannabis stocks this year, but I still won't be investing in it anytime soon because it isn't anywhere close to being profitable. While I think the company's strategy of focusing on medicinal cannabis goods in the E.U. segment will be effective in the long term, I'd be much more comfortable investing in Tilray if I could point to consistent trends of falling costs and rising revenue. In fact, the company's gross margins fell in the most recent quarter, and its revenue only increased by 10% year over year. Thus, I'll be keeping an eye on Tilray's progress before considering a purchase again.