While the fine points have yet to be fully explained, Democratic presidential nominee Joe Biden has broadly described the tax overhauls he has in mind if he is elected. His campaign website explains a Biden-led White House would seek to raise the U.S. corporate tax rate from 21% to 28% and raise taxes on earnings produced abroad from a rate of 10.5% to 21%. He also intends to impose a "15% minimum tax on book income so that no corporation gets away with paying no taxes."

That plan poses a clear threat to most large companies' bottom lines. Independent tax policy analysis nonprofit The Tax Foundation estimates these moves would extract an additional (on a net basis) $2.65 trillion from U.S. companies over the course of a decade. All for-profit organizations would pay at least a little more, including e-commerce giant Amazon (NASDAQ:AMZN), which is often criticized as dodging taxes.

Anyone who is worried that Biden's proposed tax code plan would prove devastating to Amazon, however, doesn't need to sweat it too much. 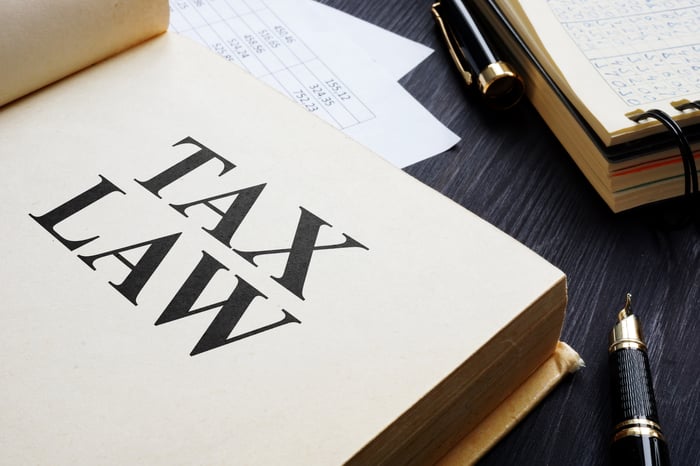 If it feels like Joe Biden is particularly fixated on Amazon's tax bills, you're not imagining things. The Democratic nominee has repeatedly pointed out how little Amazon pays in any given year.

After Amazon paid no U.S. taxes whatsoever in 2019 for fiscal 2018, Biden tweeted, "I have nothing against Amazon, but no company pulling in billions of dollars of profits should pay a lower tax rate than firefighters and teachers." In an interview with CNBC early this year, Biden again commented, "I don't think any company ... should absolutely be in a position where they pay no tax and make billions and billions and billions of dollars." He added at the time, "I think Amazon should start paying their taxes."

Indeed, Biden's corporate tax overhaul plan appears to be so Amazon-focused that it's being called the "Amazon rule" or the "Amazon tax" in some circles.

Contrary to the common complaint though, Amazon does pay income taxes. It just doesn't pay them every year, because it doesn't owe them every year. In non-paying years, it's often the beneficiary of tax credits and previous overpayments.

There are two different lines within Amazon's regularly published investor reports that flesh out this financial reality. The "provision for income taxes" shows up on the income statement, while "cash paid for income taxes net of refunds" is part of the cash flow statement's supplemental information. They're not the same number because the provision doesn't reflect expenses related to compensation in the form of stock and stock options.

In the aggregate, Amazon has reported $40.6 billion worth of taxable income over the course of the past 13 years. Almost $8.8 billion of that was earmarked as an aforementioned "provision" that reflects a basic tax liability for any given year. That's around 21.7% of its net income. Conversely, the company's made $4.4 billion worth of actual cash payments to the IRS during this time, or roughly 10.8% of its cumulative bottom line. (The company's generous stock and stock option grants dramatically lower its ultimate tax liability.) Even though the actual payment is a much smaller number than the tax payment provision, Amazon is paying something. 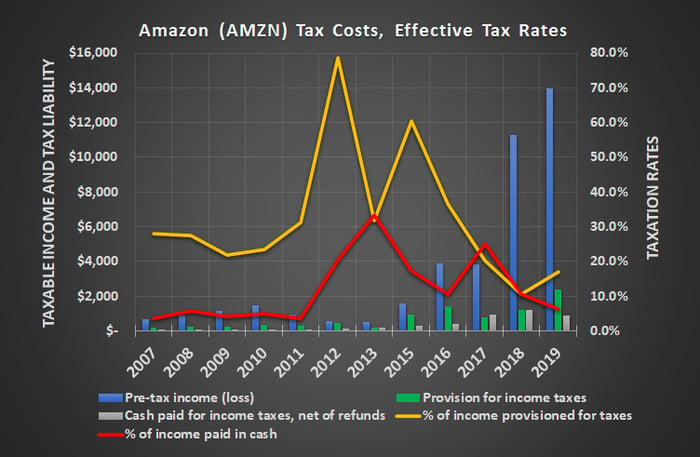 Data source: Amazon annual reports. Dollar figures are in millions. Graphic omits 2014, as that year's loss of $111 million skews the averages as well as the chart.

The 800-pound gorilla in the room: No matter which method is used to measure its tax liability, Amazon has enjoyed much lower rates under the recently revised tax code than it has in the past. Higher rates could undo that upside to a significant degree.

While it provisioned nearly $2.4 billion in income taxes last year, that's only 17% of its income. Joe Biden's plan would have taxed net income at a rate closer to 28%, which could have cost the company on the order of an extra billion dollars. Amazon actually issued $881 million worth of actual payments, or 6.3% of pre-tax profits, for income taxes in 2019 (though not necessarily owed for tax-year 2019). But, applying the minimum tax rate of 15% on Amazon's book income -- or actual income reported to shareholders -- might have more than doubled the 6.8% income tax rate after accounting for stock grants. That, too, could have cost the company about another billion dollars. Inasmuch as Biden's proposed tax rates on money earned overseas would be twice the current rate, the additional annual burden may be pushed well over the billion-dollar mark.

A Biden victory still wouldn't be devastating. Amazon's tax provision of just a little less than $2.4 billion as well as its cash tax cost of $881 million are both still well under the $14 billion worth of profits booked in 2019. There's room for bigger bills.

Any figure near a billion dollars is still huge, though, and Amazon could do a lot of things with an extra billion every year. And of course, the more profitable Amazon grows, the bigger that additional tax burden becomes.

If Biden Gets Elected, Is Amazon on the Hook for Billions in Taxes? @themotleyfool #stocks $AMZN Next Article
Current