The Google parent will report third quarter results on Oct. 29.

Although Alphabet (GOOG -1.75%) (GOOGL -1.85%) subsidiary Google is primarily a digital company with a minimal physical footprint, it is still negatively affected by the coronavirus pandemic. That's because many of the businesses that use its platforms for advertising are enterprises that rely on people to leave their homes to consume their products or services.

Further, some companies in the leisure and hospitality areas are not permitted to reopen to the public. It follows then that such companies would have little need to advertise and, in fact, may need to shut off ad spending completely to conserve cash. That being said, people are spending more time at home and, as a result, more time on their computers or mobile devices conducting searches on Google or watching videos on YouTube.

Those forces will be on display when Alphabet reports its third quarter results on Oct 29. Here are three critical factors to watch. 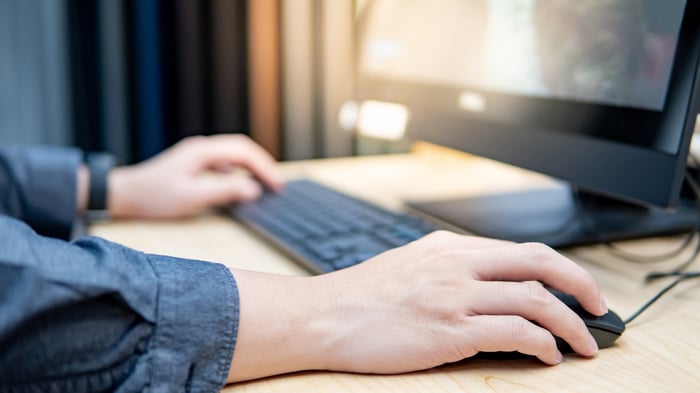 Alphabet is hoping for a return to revenue growth in the current quarter. Image source: Getty Images.

Alphabet is searching for an increase in revenue as businesses reopen

First, you will want to look at the reported revenue growth. In the most recent quarter, revenue decreased by 2%. Even though there was more engagement with its services, the price of the services decreased. Investors will want to know what portion of overall revenue came from its lucrative Google Cloud business. That's because it's one of the more profitable areas of the company. An increase in the portion of revenue coming from Google Cloud is more likely to increase profits.

Speaking of profits, that's the next important factor shareholders will want to look at in the report. In the most recent quarter, the company's operating margin decreased to 17% from 24% in the year prior.

Lastly, those interested in Alphabet will want to observe how many shares of its stock the company purchased in the quarter. The board recently authorized an additional $28 billion of share repurchases, and the company still had $5.4 billion remaining from an existing program. Alphabet has one of the highest quality balance sheets with $121 billion in cash and marketable securities and only $4 billion in long-term debt as of June 30.

The worst of the pandemic may be behind Alphabet as cities, states, and countries continue to allow more businesses to reopen. Those companies will need to get the word out that they are open and are likely to use Alphabet's platforms.

The consensus revenue forecast among analysts on Wall Street is for $42.7 billion in the quarter and earnings per share of $11.09. The tech stock is up about 16% year to date and could have more room to run up if it reports better than expected results on Oct 29.

Additionally, if the stock drops after the report, Alphabet may use that as an opportunity to accelerate share buybacks.