AbbVie (NYSE:ABBV) has taken an important step forward with one of its drug programs. The company announced Monday it has submitted its Rinvoq for approval to both the U.S. Food and Drug Administration (FDA) and the European Medicines Agency (EMA).

Rinvoq's submittal is for the treatment of moderate to severe atopic dermatitis, one of a series of inflammatory skin afflictions commonly known known as eczema, in adolescents and adults with moderate to severe forms of the disease. 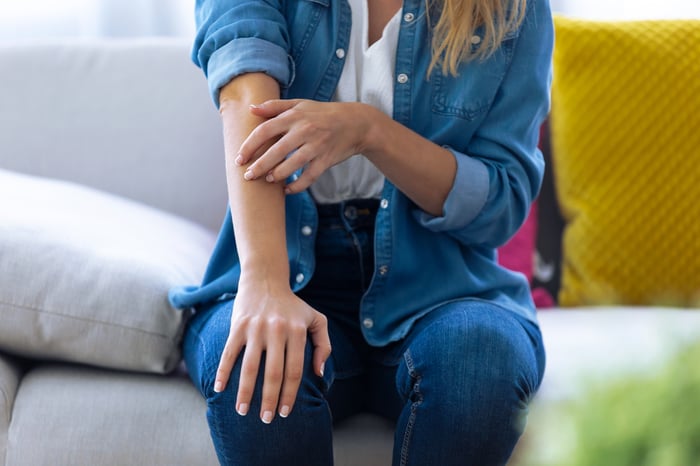 AbbVie's submittals come on the heels of three successful phase 3 trials of the drug. In each, the company said, Rinvoq showed dramatic levels of skin clearance. It also efficaciously reduced itching in both adolescents and adults.

The drug was discovered, and is being developed, exclusively by AbbVie. It has been studied for the treatment of a number of immune-mediated inflammatory diseases, such as ulcerative colitis, psoriatic arthritis, and Crohn's disease.

That list includes rheumatoid arthritis, for which the FDA granted approval last year for patients with moderate to severely active forms of the affliction. This was soon followed by EMA approval, with the difference being that the patients must be intolerant of (or inadequately responsive to) at least one disease-modifying, anti-rheumatic treatments.

As for the latest submittals, AbbVie quoted its vice chairman and president, Michael Severino, as saying that they "are an important step forward in our commitment to providing an additional treatment option for those who struggle with this debilitating and often underappreciated disease."

In spite of the double dose of encouraging news, AbbVie's share's fell by 2.3% on Monday, a steeper fall than that of the S&P 500 index.