After shunning M&A for years, ConocoPhillips found a deal that checks all the boxes.

Over the past few years, ConocoPhillips (COP -2.49%) has repeatedly said that it's not interested in large mergers. That's because big corporate transactions usually require large premiums, which eat into investment returns. Given the oil company's high bar for returns, most merger opportunities haven't made sense.

However, after years of avoiding corporate M&A, ConocoPhillips is back in the game, agreeing to acquire Concho Resources (CXO) in an all-stock deal. Despite Conoco paying a premium to buy Concho, this deal checks all the boxes. 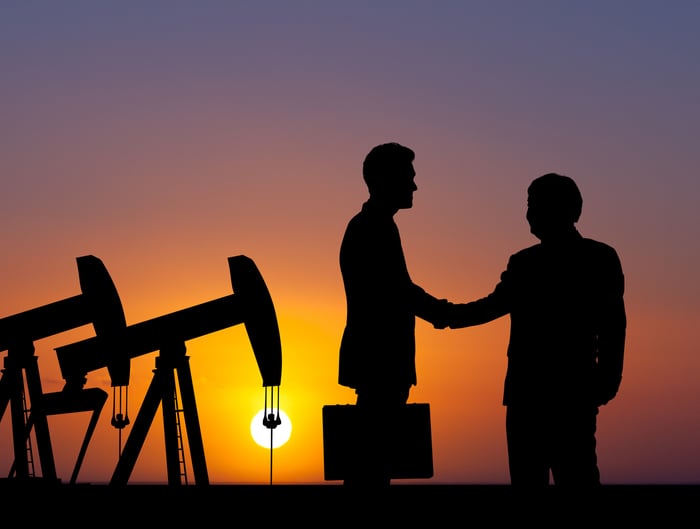 ConocoPhillips has agreed to swap 1.46 of its shares for each share of Concho Resources in a deal valuing that company at about $9.7 billion, or about $13 billion including Concho's existing debt. That exchange ratio implies a 15% premium to where Concho's stock traded before rumors of a potential deal surfaced last week. While that's a bigger premium than some recent transactions in the oil patch, it's still low enough to satisfy ConocoPhillips' high hurdle rate for M&A as it's accretive to all of the company's key financial metrics.

The main draw of Concho is its premier low-cost resource position in the Permian Basin. Combined with ConocoPhillips' legacy assets, the company will control 23 billion barrels of oil-equivalent resources with a supply cost of less than $40 a barrel, with an average below $30. Further, the company believes it can capture $500 million of annual and capital cost savings by 2022. That will enhance its cash flow, freeing up more to return to investors, with it aiming to send at least 30% back each year via a compelling dividend and additional distributions, which could include share repurchases or special dividends.

ConocoPhillips has waited for the right deal to come along. That patience is paying off as it's buying Concho for a fraction of what it would have cost a couple of years ago. For example, in March 2018, Concho acquired RSP Permian in an all-stock deal valuing its rival at $9.5 billion, including debt. At the time, the transaction created the largest unconventional oil and gas producer in the Permian Basin. It also implied that the whole company was worth more than $40 billion, given the stock exchange ratio, which gave RSP Permian shareholders 25.5% of the combined company.

Besides getting Concho's premier Permian position at a fraction of its former value, Conoco expects the combination to create significant value for investors without any help from oil prices. For example, the anticipated $500 million of cost savings that the company expects the deal to generate could increase its value by an estimated $5 billion. These are easily achievable cost savings as the company expects to reduce corporate costs, cut its exploration budget, and streamline its regional operations.

Finally, ConocoPhillips expects the combined company to thrive at lower oil prices next year, even without those incremental cost savings. It only needs oil to average $41 a barrel next year -- right at the current price point -- to generate the cash necessary to sustain its combined production level and pay its 5.1%-yielding dividend. Because of that, any improvement in oil prices would bolster its free cash flow, giving it more money to return to shareholders via additional share repurchases or special dividends. Meanwhile, that breakeven level should improve in 2022 as ConocoPhillips delivers on its full cost-savings goal. That potentially sets it up to generate and return even more cash to shareholders since it targets sending them at least 30% of its cash flow from operations each year.

A top-tier resource base for a fraction of the price

ConocoPhillips has made it clear over the years that it will only pursue a large-scale corporate M&A transaction if it meets its high return hurdle. That's exactly what this Concho transaction does; it's buying the company at a fraction of its former value. As a result, Conoco is adding a significant low-cost resource position at an excellent price, which will immediately enhance all of its key financial metrics and generate substantial future cost savings, enhancing its ability to create value.