Here's why investors should stay away from some of the riskiest coronavirus stocks on the market.

Less than one year after the emergence of SARS-CoV-2, science has already developed a significant number of diagnostic tests, antibody tests, treatments, and experimental vaccines. The speed at which such innovations are being used against the virus is arguably unprecedented for any major global pandemic.

Because the pandemic is rapidly evolving, the companies that are part of the fight against the coronavirus are changing swiftly as well. More specifically, a number of hyped-up coronavirus ventures initiated by a few small-cap companies in the sector are looking increasingly likely to disappoint investors. Today, let's take a look at these companies and their efforts, and why it's a good idea to refrain from investing in each. 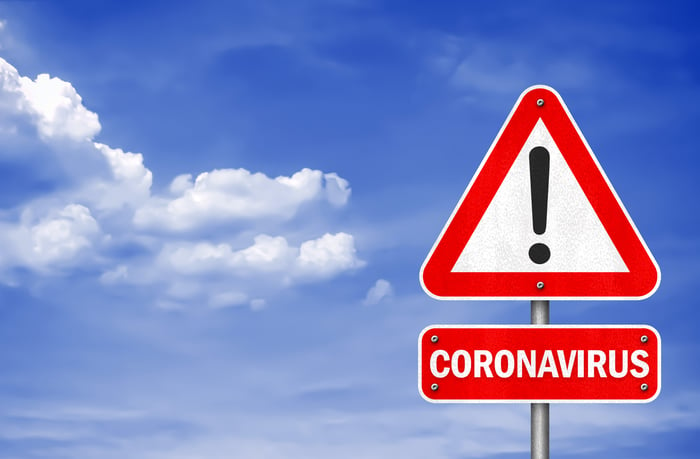 Just a few months ago, Sorrento Therapeutics (SRNE) seemed like the ultimate bet in the battle against the coronavirus -- the company was developing diagnostic tests, antibody tests, antibody cocktails, "viral decoy receptors," and a COVID-19 vaccine candidate all at one time. However, as of mid-October, none of the company's products are available for use by the public, with most of its COVID-19 treatment and preventive programs in preclinical or early testing stages.

That is highly concerning for investors because a coronavirus vaccine may be available as soon as November. Once a vaccine becomes widespread, coronavirus tests and treatments will likely see a large drop in demand, and many of the company's products could be rendered obsolete. And even if testing remains widespread and Sorrento lands emergency use authorizations from the U.S. Food and Drug Administration (FDA) for its COVID-19 antibody and diagnostic tests ... there are 281 such tests already on the market, casting doubt on the revenue potential there.

If that wasn't bad enough, the company is also quickly running out of capital, with just $24.4 million in cash on its balance sheet compared to $259 million of debt, notes, and lease liabilities. In the first half of 2020, Sorrento operated at a net loss of $143 million.

When companies do not have enough cash, they must raise funds via capital markets, diluting investors in the process. During the first half of 2020, Sorrento's shares outstanding increased from 165 million to 217 million. The company simply isn't progressing fast enough, especially given how quickly the coronavirus sector has advanced since March.

Vaxart (VXRT -1.82%) captivated investors' attention in June when it announced that its experimental oral coronavirus vaccine had been selected as part of the U.S. government's Operation Warp Speed. Four months later, however, the company is now part of an investigation by the Securities and Exchange Commission and federal prosecutors for allegedly exaggerating its role in Operation Warp Speed.

As it turns out, the company's vaccine candidate was only chosen to be part of a study on its effects when administered to non-primate animals. That is drastically different than the impression the company gave, which was that the Operation Warp Speed funding would advance its vaccines through clinical testing on humans, as with other companies chosen. There are also multiple class action lawsuits pending against Vaxart.

But wait -- the situation gets even more sketchy. After its original announcement in June, Vaxart's stock soared by as much as 700% within a month. One of Vaxart's biggest shareholders, Armistice Capital LLC, took the opportunity to sell stock and lock in a $200 million profit. That entity now faces allegations of insider trading.

Nearly 16 years after its inception, the $666 million market cap company has accumulated a deficit of $127 million and has negligible product revenue. Given the emergence of serious legal allegations and its limited history of success, I would give Vaxart a hard pass.

VBI Vaccines (VBIV -4.22%) received a lot of attention in September when it signed a $42.5 million deal with the government of Canada to develop a COVID-19 vaccine by the first quarter of 2022. But now that the coronavirus vaccine race seems to be nearing an endpoint, investors are increasingly putting the company under greater scrutiny.

First of all, VBI's vaccine candidate has not yet even reached phase 1 clinical testing, which already puts it well behind industry competitors that are nearing or have entered phase 3 clinical trials. Second, even if the company's experimental vaccine succeeds in all three stages of clinical studies, it may not be released in time to make a difference.

The top nine coronavirus vaccine players are expected to reach an annual production capacity of 8.7 billion doses (of both single- and double-dose vaccines) by the end of next year, which would be enough to vaccinate the entire planet in a couple of years. Because of this, the lack of a first-mover advantage -- and the potential lack of a functional vaccine by the end of next year -- could gravely hurt VBI Vaccines' sales potential.

Like Sorrento and Vaxart, VBI Vaccines has a massive cumulative deficit, which amounts to $280 million since it began operations in 2001. The company's vaccine products brought in limited sales of $55 million in 2019 and a net loss of $64 million in 2018.

At the end of the day, if investors want to see a solid return on their investments, they should consider large-cap biotechs with the ability to cushion losses if their experimental vaccines do not succeed in clinical trials or commercialization. Right now, investing in small-cap coronavirus vaccine developers is too much of a risk.