GM designed the new Hummer EV to impress -- and priced it accordingly.

General Motors (GM -0.89%) unveiled its much-anticipated electric Hummer truck last night — and said that the first year's production of the battery-powered "supertruck" is already sold out.

Production of the Hummer — officially, the GMC Hummer EV — will begin in the fall of 2021 and will gradually ramp up over the following two years. Only the $112,000 top-of-the-line model, called the Edition 1, will be available in the first year. Other, less expensive models will follow in 2022 and 2023, the company announced.

GM opened online reservations for the Hummer on Tuesday night. The Edition 1 sold out in about an hour; other versions were still available as of Wednesday morning. 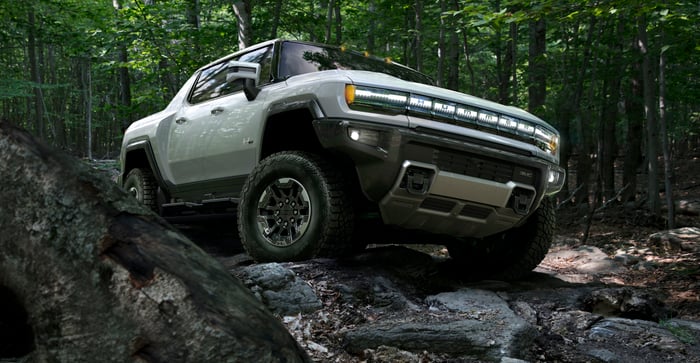 GM's new Hummer EV has lines reminiscent of its brawny predecessors. But unlike those gas-guzzlers, this new Hummer is 100% electric. Image source: General Motors.

The Hummer EV Edition 1 is clearly aimed to compete with upcoming rivals, including a premium electric pickup from Michigan-based start-up Rivian and Tesla's (TSLA 0.91%) much-hyped Cybertruck.

The Edition 1 will generate 1,000 horsepower from a three-motor drivetrain with a zero-to-60 time of about 3 seconds and estimated range of at least 350 miles, GM said. It'll be capable of 800-volt DC Fast charging at up to 350 kilowatts, enough to add nearly 100 miles of range in 10 minutes.

All versions of the Hummer EV will be powered by GM's new Ultium batteries and its proprietary Ultium Drive motor units. All but the lowest-level model, due in the fall of 2023, will have the 800-volt DC Fast charging capability, said the automaker.