Here's why the one-time camera giant is unlikely to find redemption via the pharmaceutical industry.

In July, Eastman Kodak (KODK 0.75%) stock soared by more than 1,000% on news that it would be receiving a $765 million loan under the Defense Production Act to manufacture active pharmaceutical ingredients (APIs) for generic drugs. Not even three months later, the stock is now down more than 70% from its all-time highs, resulting in devastating losses for investors who bought at the wrong time. There are now multiple class action lawsuits pending against Kodak.

When a struggling company fails to turn around, its inability to properly handle opportunities is often one big reason. Let's look at three red flags facing Kodak, and why investors should stay well away from the stock. 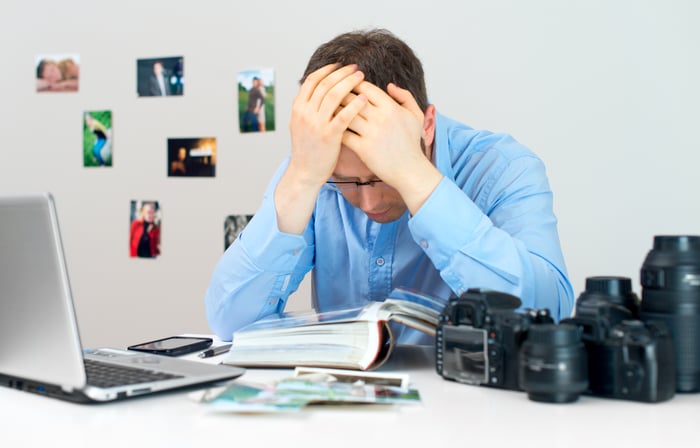 Currently, both the U.S. House of Representatives and the Securities Exchange Commission are investigating Kodak's board members for allegedly issuing millions in stock options and making insider trades days before news of the company's $765 million loan consideration was made public. In September, a law firm hired by Kodak found the company did nothing wrong after an internal review, but that creates more pieces for the puzzle regarding a potential conflict of interest. Since August, the once-promising pharmaceutical loan has been placed on hold. Given the severity of the allegations, there is no reason the government agencies wouldn't pick another entity with better corporate oversight than Kodak to eventually receive the loan.

Even if Kodak magically gets that funding back, there is little reason to expect the company can profit from making ingredients for generic drugs. First of all, one of the drugs on the company's manufacturing list has repeatedly shown no benefit when given to patients in clinical trials. Secondly, Kodak would be up against many other generic manufacturers in a hypercompetitive deflationary environment. Due to an initiative on the part of the the U.S. Food and Drug Administration (FDA) to accelerate the approval of generic drugs in recent years, their list prices have fallen by more than 37% since 2014.

Finally, keep in mind that Asian countries account for manufacturing about two-thirds of all generic drug ingredients in the world, because labor and materials are both cheaper there. While a potential loan award for making such generic APIs in the U.S. would undoubtedly bring back American jobs, it's difficult to see how such an initiative could be sustainable in the long term. It entirely sidesteps the issue of lower production costs abroad, and the fact that outsourced generic APIs still outcompete U.S.-manufactured ones.

In the second quarter of 2020, Kodak's revenue and operating income before non-cash adjustments (EBITDA) decreased by $93 million and $6 million, respectively, to $211 million and negative $7 million. The company's digital cameras and photo printers are becoming increasingly archaic because of ongoing pressure from smartphones and cloud storage. Kodak is not profitable and has little cash left over after accounting for its $113 million long-term debt and $51 million in annual operating lease liabilities.

From my vantage point, the entire pharmaceutical loan fiasco is nothing more than a trading rebound for a company that's on the decline over the long term. Thanks to a long decade of missed turnaround opportunities, Kodak now has an accumulated deficit of $195 million -- quite a change from back in 2005, when its retained profit was $6.7 billion. (Accumulated deficit/retained profit represent the sum of all of a company's annual net income and loss since it was founded.) If investors are interested in pharma stocks, they should place their capital in a company whose management looks out for shareholders' best interests, and avoid Kodak altogether.