In less than two weeks, Americans will vote on who will serve as president for the next four years. Will the winner be Donald Trump or Joe Biden?

Different stocks among the 100 most popular on the Robinhood trading platform are likely to prosper more under one of these candidates than under the other. Here are three Robinhood stocks that are especially likely to skyrocket if Joe Biden wins in November. Note that they all share one key characteristic. 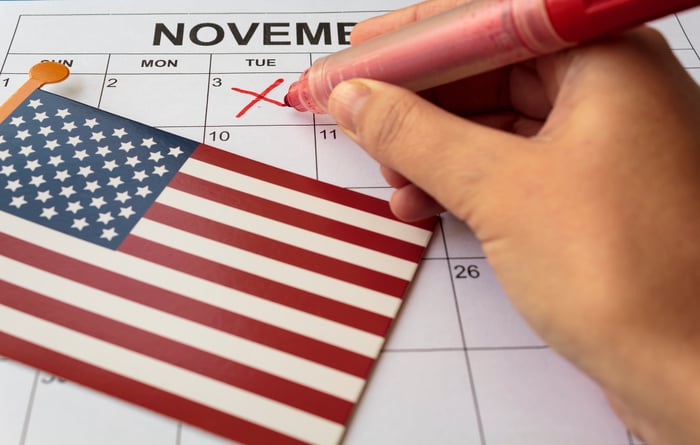 Canopy Growth (NASDAQ:CGC) ranks as the biggest marijuana stock on the market by market cap. Its shares are down so far in 2020, but could take off if Biden is elected president. It's possible -- or even probable -- that medical cannabis could be legalized in the U.S., or federal laws could be changed to allow states to enforce their own recreational marijuana laws under a Biden administration.

If this happens, it would be great news for Canopy. The company appears to be in the best position among Canadian cannabis producers to quickly enter the U.S. cannabis market if federal laws are revised.

Canopy already has an agreement in place to acquire U.S.-based cannabis operator Acreage Holdings when it's federally permissible to do so. It also has a close relationship with its major stockholder, U.S.-based adult beverage maker Constellation Brands. The connection with this big partner could give Canopy an advantage in marketing cannabis-infused beverages in the U.S.

Another Canadian cannabis producer with a big partner that's popular with Robinhood investors also could benefit if Joe Biden wins on Nov. 3. Cronos Group (NASDAQ:CRON) has plenty of cash thanks to a huge equity investment last year by tobacco giant Altria (NYSE:MO). Investors will probably expect Cronos to put some of that cash to work to jump into the U.S. market if federal cannabis laws are changed under a Biden presidency.

Cronos already competes in the U.S. hemp-derived CBD products market. It acquired Lord Jones, which makes premium CBD brands, in 2019 for $300 million. That was an exorbitant amount to pay for a tiny CBD company. However, the deal gave Cronos a toehold in the U.S. that it certainly hopes to leverage.

It could be interesting to see whether Altria becomes even more actively involved with Cronos' operations if the company is able to expand into the U.S. cannabis market. A former Altria executive already leads the company's U.S. CBD business. With a huge shareholder and partner at its side, Cronos could be a leader among Canadian cannabis producers moving into the much larger market across the border.

Aphria (NASDAQ:APHA) disappointed investors with its fiscal 2021 Q1 results announced last week, but its stock could enjoy a big rebound on Election Day with a Biden victory.

CEO Irwin Simon is no stranger to the U.S. consumer goods market with over 25 years running New York-based food company Hain Celestial. During Aphria's Q1 conference call, Simon said that "the up and coming U.S. elections could provide for a change in federal regulations, which Aphria will be ready for."

Aphria doesn't have a U.S. partner like Canopy and Cronos do. However, Simon stated in the company's recent call, "There are multiple partner opportunities for us ... we want to pick the right one." If Biden wins in November, look for Aphria to move quickly with its deal-making efforts.

Should President Trump defeat Joe Biden, all three of these pot stocks will likely fall somewhat. Canopy Growth could be the biggest loser of the three since its Acreage deal is a significant bet on U.S. marijuana legalization.

It's also possible that Canopy, Cronos, and Aphria stocks won't receive a boost even if Biden wins the presidency. If the GOP retains control of the U.S. Senate, any efforts to change federal marijuana laws could be blocked.

If Biden wins with a substantial margin, the Democrats are also likely to take the Senate. One thing is for certain: Election Day will be key, even for Canadian marijuana stocks.