Despite high-profile agreements to provide coronavirus testing, this small-cap company might not pass the test in the long term.

The coronavirus has brought many small healthcare companies into the limelight in 2020 -- from small drugmakers testing experimental therapies to quiet diagnostics businesses suddenly facing demand for hundreds of millions of tests.

OPKO Health (OPK) has found itself in investors' spotlight this year, having parlayed its 2015 acquisition of BioReference Labs into a leading position managing coronavirus testing for sports leagues. But interested investors should consider two key questions: What is OPKO beyond its testing programs, and could the company offer good returns in the future? 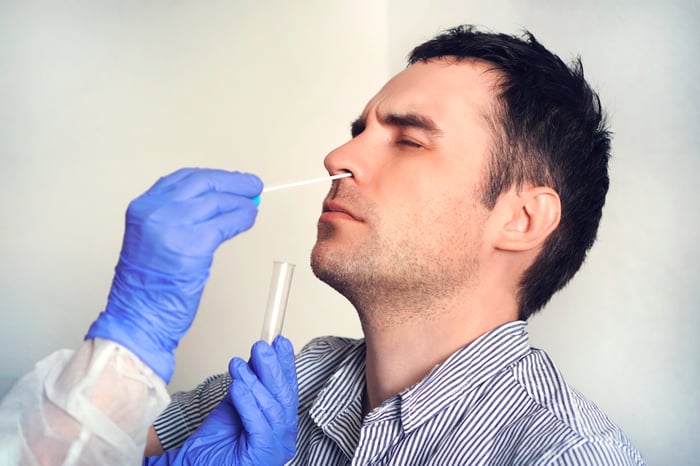 OPKO Health is both a drugmaker and diagnostics business. The company's Rayaldee, a treatment for chronic kidney disease, brings in meager sales, and it is currently developing Somatrogon, a hormone for growth deficiency, with Pfizer (PFE -1.04%). The company also has a hemophilia drug in phase 1 trials. Its diagnostics business, essentially the BioReference Labs acquisition, drives the bulk of revenue.

Given its market capitalization of just $3 billion, it seems Wall Street doesn't expect a lot from the company. But several things have been going in its favor recently. In particular, BioReference Labs has been winning contracts to manage coronavirus testing programs for professional and collegiate sports, major metropolitan school systems, cities and states, and healthcare systems.

To determine whether this good news makes OPKO a buy, we need to know whether its COVID-based revenue gains are sustainable. Since most small biotech companies (including OPKO) have no earnings,  we can look to cash flow from operations to see whether the company is bringing in money before it invests in growth. Positive cash flow from operations would show us that the sales the company makes are enough to run the existing business, even if management would need to find more money to invest in growth.

Second-quarter revenue was up 33% year over year, to $301 million, and the company earned $33.7 million, compared to a loss of almost $60 million in 2019. That increase was almost wholly from the diagnostics segment (rather than pharmaceuticals) thanks to significant COVID-19 testing volume. Management reported 2.2 million tests administered in the quarter and the capacity for 50,000 per day. That said, management has reported a decline in routine clinical and genomics testing.

OPKO had previously suffered a setback in 2019, when Medicare refused to cover the company's 4Kscore prostate cancer tests after questions arose about the clinical trial data. The company won an appeal, and 14,000 tests denied by Medicare in 2019 were recognized, resulting in $10.9 million in additional revenue. Future tests will be covered as well. Finally, Rayaldee prescriptions were up 45%, although their total contribution was a modest $8.6 million. The company is beginning phase 2 trials of the drug on patients infected with the coronavirus, which could provide additional revenue.

Over the longer term, the Q2 revenue increase may be only a blip -- before the pandemic, revenue had been trending down for years. 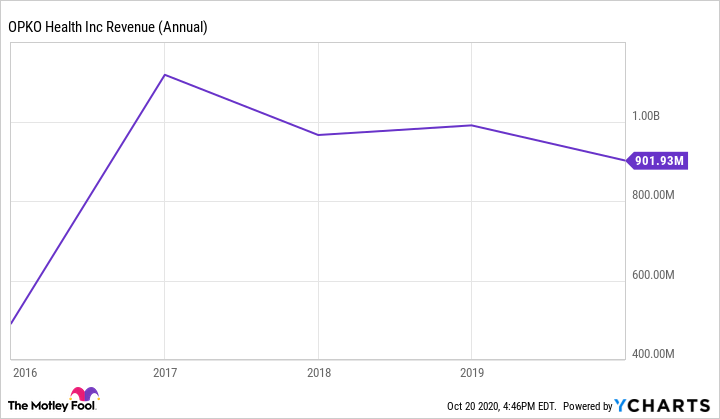 Even with the increase in revenue, cash from operations remained in the red at negative $25 million in the first six months of 2020 (up from negative $141 million in the same period in 2019). And the trend has persisted. 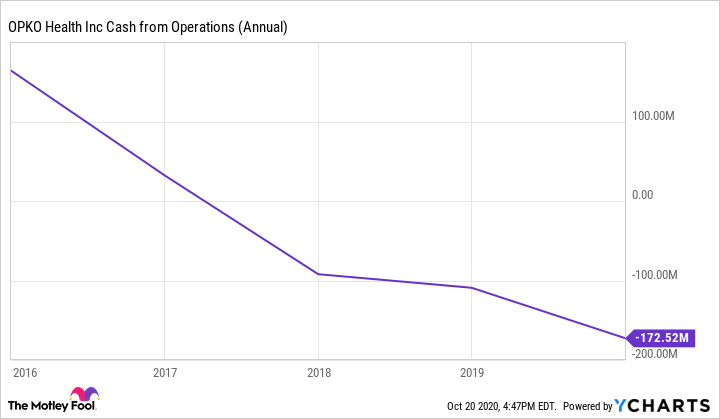 With revenue and cash from operations trending down over time, the prospects for OPKO Health do not seem rosy. COVID-19 testing has given management a temporary reprieve and offered an opportunity to restructure costs so the business can be cash-generating. But so far, it hasn't been able to do that.

While it is never wise to bet on an acquisition when making an investment, I believe the longer the pandemic lasts, the more likely OPKO is to sell itself. The diagnostics segment has scored high-profile wins and offers a prostate cancer risk assessment that could be useful for a larger diagnostics company. That said, this is a stock for gamblers. Healthcare investors would be wise to pass on OPKO Health stock.