The stock market recovered some ground on Thursday as market participants got more optimistic about the prospects for a new government stimulus package. Despite partisan conflict, signs emerged that lawmakers on Capitol Hill might be able to reach some kind of consensus. Given that many investors had written off such aid until at least after the November elections, that was enough to send the Dow Jones Industrials (DJINDICES:^DJI), S&P 500 (SNPINDEX:^GSPC), and Nasdaq Composite (NASDAQINDEX:^IXIC) higher.

Airline stocks have been especially sensitive to the fate of a stimulus package, given that they could be among the major beneficiaries of federal legislation. With Southwest Airlines (NYSE:LUV) and American Airlines Group (NASDAQ:AAL) offering their takes on the industry with their quarterly financial results earlier today, there's still plenty of work to do before airlines recover fully. Nevertheless, optimism ran rampant in sending most stocks in the sector sharply higher.

Southwest shares closed up 5% on the day. The airline's third-quarter results weren't ideal, but they weren't nearly as bad as many had feared.

Revenue at Southwest plunged 68% from year-ago levels. Revenue per available seat mile dropped almost 53% year over year, with load factors falling nearly 39 percentage points. That produced a net loss of $1.2 billion for the airline. However, Southwest saw load factors improve over the course of the quarter. July's number of 42.6% climbed to 51.5% by September. 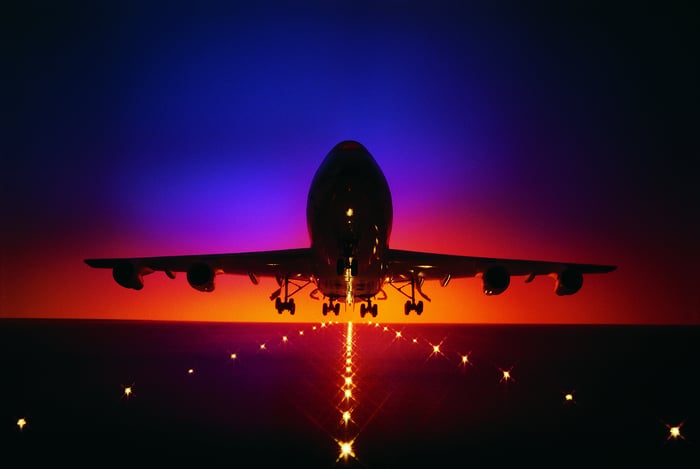 Moreover, investors seemed pleased that Southwest decided to join most other carriers in making middle seats available for passengers starting on Dec. 1. CEO Gary Kelly pointed to scientific research that suggested such a move would still be consistent with Southwest's commitment to safety.

Meanwhile, American was higher by just 3%. The airline's results had a lot in common with Southwest's, with revenue falling 73% and American seeing a net loss of $2.8 billion after adjusting for special items.

Both airlines said they had ample liquidity. Efforts to reduce costs and preserve cash have helped to reduce cash-burn rates, giving airlines more time to wait for industry conditions to improve.

What it'll take for airlines to rebound

Investors across the industry celebrated the more optimistic aspects of the two airlines' reports. Delta Air Lines (NYSE: DAL) and United Airlines Holdings (NASDAQ: UAL) were up 7% and 5%, respectively. Smaller carriers were up even more sharply, with Hawaiian Holdings (NASDAQ: HA) jumping 18% and JetBlue Airways (NASDAQ: JBLU) coming in with a 9% rise.

Yet even the airlines indicated that what's truly needed is a complete solution to the coronavirus crisis. Until there's a vaccine or other solution to eliminate the safety risks of COVID-19, a large group of people will choose not to travel by air.

In that light, it's possible that airline stocks are getting ahead of themselves. After today's gains, Southwest is down just 22% from where it started the year. With so much uncertainty still remaining, any setbacks could cause airlines to give back some of their recent gains.