Shares of Sam Adams brewer Boston Beer (NYSE:SAM) are up 15% as of 10:30 a.m. EDT today, after the company reported strong third-quarter results late yesterday. In addition, the company significantly increased its 2020 earnings outlook.

The company reported a 30% increase in net revenue and a more than 80% jump in net income compared with the previous-year period. 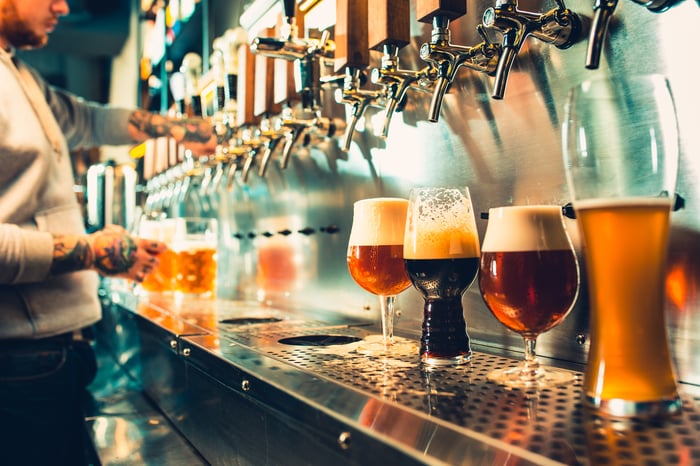 Dave Burwick, the company's president and chief executive officer, said in a statement that the strong quarter was mainly "the result of increases in our Truly Hard Seltzer and Twisted Tea brands." He added that the growth of the business into next year is expected to be driven by the Truly brand.

The results continue the growth the company experienced earlier this year. It reported in the previous quarter that earnings had more than doubled versus the comparable year-ago period. The stock has responded with a gain of about 180% since the start of 2020, and it's now valued at more than $1,000 per share.

Based on the results, Boston Beer has increased its earnings-per-share expectations for the full year from a midpoint of $12.20 to $14.50 per share. Growth will be based on the Truly brand going into 2021. Early in 2021, the company plans to introduce "Truly Iced Tea Hard Seltzer, Truly Extra, a higher ABV [alcohol by volume] version of Truly, and other new Truly flavors and package sizes," it said in the earnings press release.

Though sales of its other brands, including Samuel Adams, Angry Orchard and Dogfish Head, decreased during the quarter, CEO Burwick said that those brands did show growth in September that the company plans to build upon.