You've got challenges, goals, and financial situations the Oracle of Omaha doesn't.

The premise makes enough sense. By doing things the same way legendary investor Warren Buffett does them, you should be able to (more or less) mirror his results.

Chasing the Oracle of Omaha's coattails isn't necessarily a great strategy for all investors, though. His goals and reasons for stepping into a particular position may or may not align with yours. In fact, they probably won't. Here are the three biggest reasons you'll want to think twice before following in Buffett's stock-picking footsteps. 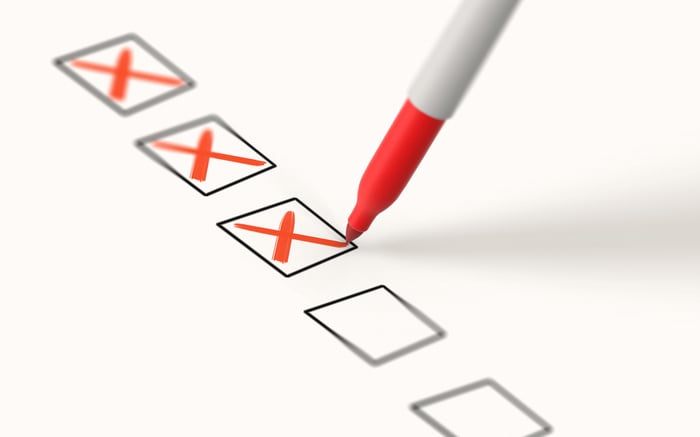 1. He's not saving for retirement

A handful of investors may already have a fully funded retirement in place, but most of us have to grow a portfolio during our working years and then make that nest egg produce a reliable income during our golden years. Broadly speaking, that means we lean heavily toward growth investments while we're younger, and then shift toward value and dividends as we age.

Warren Buffett's most recent estimated net worth is on the order of $70 billion, however. He doesn't need to worry about the optimal mix of growth and dividends and perfectly timing the shift from the former to the latter, however, as he's got more than enough of both all the time to support his relatively modest lifestyle. When he says his favorite holding period is "forever," he's not kidding.

You probably know Buffett's Berkshire Hathaway ( BRK.A -0.45% ) ( BRK.B -0.59% ) has a huge stake in Apple ( AAPL -1.17% ), and holds huge positions in Bank of America ( BAC -2.27% ) and Coca-Cola ( KO 0.89% ). What you may not realize is that a great deal of Berkshire's holdings are privately held companies, such as See's Candies, Acme Brick Company, utility company PacifiCorp, Geico Insurance, and grocery logistics outfit McLane Company, just to name a few.

These organizations don't have a quantifiable market value, as they're not publicly traded. They do, however, contribute cash flow to Berkshire's overall operation. These privately held investments accounted for about $24 billion of last year's earnings attributable to Berkshire shareholders, and perhaps more importantly, these entities smooth out the volatility of gains and losses from the rise and fall of Berkshire's stock holdings.

Of course, as the owner of these entities, Berkshire and Buffett exercise control of their operations to their long-term advantage rather than the short-term results that shareholders generally demand.

3. He can make deals you can't

Finally, Warren Buffett usually holds stakes in the very same stocks ordinary investors can own. That's not always the case, though, and these one-offs are a key part of the reason Berkshire Hathaway's performance is, on average, better than the broad market's.

Take, for instance, Buffett's 2008 agreement with Goldman Sachs ( GS -1.24% ). Like most other banks, Goldman was wrecked by the meltdown of the subprime mortgage market and the subsequent recession. Desperate for capital at the time, Goldman sold Buffett $5 billion worth of preferred stock, yielding a pretty sweet dividend of 10%. The bank also granted $5 billion worth of warrants to Buffett, allowing him to purchase Goldman Sachs common stock at a price of $115 in the future. The preferred shares netted Buffett a profit on the order of $3.7 billion in dividends and gains by the time Goldman Sachs bought them back in 2011. Before the warrants expired in 2013, the Oracle of Omaha sold them back to Goldman for $2 billion, plus picked up more than 13 million shares of Goldman Sachs common stock that went on to log big gains of their own.

Unless you had an extra $5 billion lying around that you were willing to risk when things looked bleak, you probably wouldn't have been able to take on the same sort of trade.

Don't get the wrong idea. You can still use Berkshire Hathaway's holdings as a way of generating ideas for your portfolio. Just be sure that position makes sense for your particular situation, and not just Warren Buffett's.

3 Ways You Can Beat Warren Buffett in the Stock Market

3 Ways You Can Beat Warren Buffett in the Stock Market