Breaking news: There is a presidential election coming up in a few weeks. One political party will win and another will lose. The noise and attention will be immense up until Nov. 3, but -- regardless of who wins -- the election result will not affect my investing philosophy or game plan.

Here are the four main reasons why.

1. Markets go up over time, no matter who is in power Regardless of differing regulatory agendas between our two prominent political parties, the stock market has consistently risen over the past several decades. Short-term turbulence can always be expected, but the general, long-term trajectory for markets has been up irrespective of which party wins the presidential election.

If you turn on the financial news today, you will hear professionals telling you exactly how markets will react to a specific election result. You can likely turn on the same channel an hour later to hear a completely different take on the same outcome.

While it's tempting to take investment professionals at their word and to trade or speculate around the event, market timing is a wildly challenging game. In reality, none of us know what the next move in stock markets will be and we do not precisely know how benchmark indexes will react to a Biden or Trump victory. Anyone telling you they do with 100% confidence is being dishonest.

As we've seen in the point above, markets perform well in every political climate over the long term. In this light, I strongly favor a buy-and-hold strategy over market timing during a presidential race -- just like in any other time.

3. I don't want companies relying on a certain political climate

The goal of long term investing is to profitably hold high-quality stocks for as long as those stocks remain high quality. This can take years -- or hopefully decades -- to fully play out, meaning our investments could be subjected to several red and blue waves along the way.

If a company relies on a certain tax break or needs another large stimulus package to come through to survive, it may not be a great place to invest anyway. There are plenty of publicly traded organizations that will thrive no matter what the corporate tax rate is and no matter what the regulatory climate is.

This is the type of company I contemplate as a long-term hold -- not an organization reliant on a Republican or Democrat being president.

4. Years of low rates no matter who is in power

In the Federal Reserve's most recent meeting, the independent entity all but pledged no rate hikes for three or more years. The Chairman of the Federal Reserve -- Jerome Powell -- echoed a motivation to keep rates low for several years in a recent press conference. The following chart shows just how low corporate bond effective yields and the effective federal funds rate are right now. 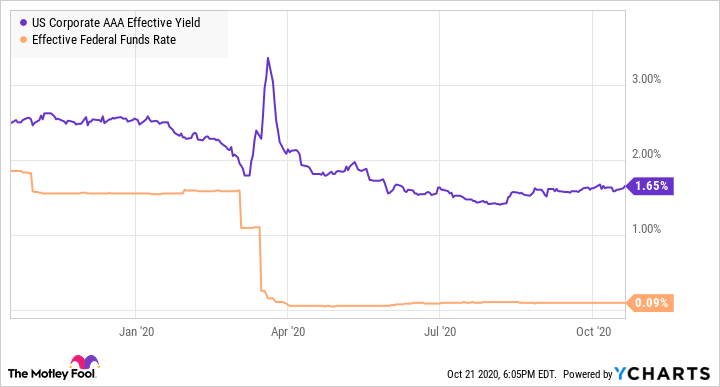 During its last monthly meeting, the Fed even announced a shift in focus away from inflation and toward lower unemployment, which supports its messaging of keeping rates low (low rates stimulate higher inflation and employment).

Corporate bond interest rates have followed the effective federal funds rate lower over the past few years. With very little interest income to be had in corporate or federal debt, the risk-reward of equity markets becomes more appealing based on lack of reward for taking risk elsewhere.

Neither candidate has mentioned the desire for higher rates, as lower rates directly stimulate economic activity. Furthermore, based on the Federal Reserve's innate independence from the executive office, it's somewhat unlikely either candidate's victory will dramatically influence the Fed's current interest rate course.

So what to do? Nothing.

While the noise of the upcoming presidential election will likely seem overwhelming at times, it's important not to make any drastic changes to your portfolio based on the outcome. Regardless of a Trump or Biden victory, finding high-quality companies to buy and hold should continue to be a winning long-term plan, as it always has been.