Please ensure Javascript is enabled for purposes of website accessibility
Free Article Join Over 1 Million Premium Members And Get More In-Depth Stock Guidance and Research
By Alex Carchidi - Oct 25, 2020 at 7:05AM

These two companies aren't reinventing the wheel, but they still have the potential for tremendous growth.

Collegium Pharmaceuticals ( COLL 1.71% ) and Athenex ( ATNX 0.00% ) may not be the most popular stocks on the market in terms of media coverage, but both might just make you rich with a well-timed investment. Unlike many of their compatriots in the world of small market cap biotechs, these two companies have regularly recurring revenues. While neither has consistently profitable operations at present, evidence suggests that they can achieve it within the next few years, making each a great candidate for investors' portfolios

What's more, these two stocks have similar paths toward profitability: Increasing the sales volume of their existing products on the market while finalizing their late-stage pipeline projects and moving them toward commercialization. There's going to be a lot going on with these companies over the near term, and growth investors should pay close attention if they want to have a shot at reaping the benefits of their successes. Let's dive in and explore Collegium and Athenex's prospects. 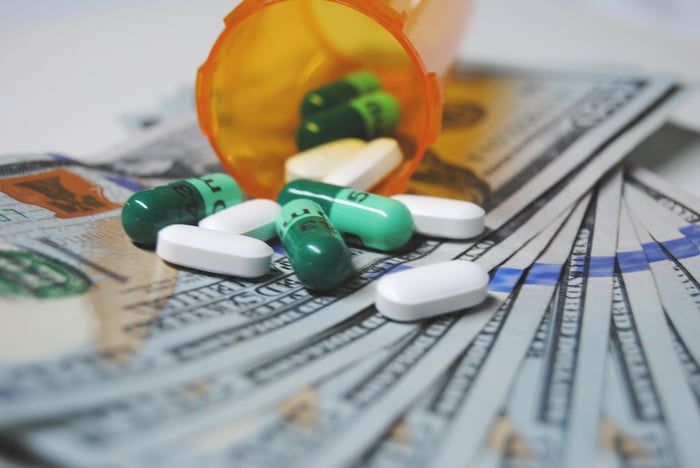 1. Collegium has gotten its first taste of profits

Collegium, a pain medicine company, derives its revenue from opioid analgesics that have been formulated for extended release. By changing the formulation of these highly effective medicines to include delayed release and other anti-abuse features, Collegium hopes to steal market share from generic opioid pain medicine manufacturers as well as branded opioid analgesics, both of which carry a high risk of addiction. Given the state of the opioid abuse epidemic in the U.S., Collegium's approach could provide clinicians the pain-relief tools their patients need, but without as much risk of future abuse.

Collegium has three products that are approved for sale, including its Xtampza extended release oxycodone tablets for pain relief. Since its regulatory approval in 2016, Xtampza has proven popular. The drug holds 23.5% of the extended-release market for oxycodone as of Q2 2020, ended June 30, up from 21.8% market share in Q1. The company expects the drug's market share to increase as a result of new development activity, which should lead to two new therapy formulations relatively soon.

In the meantime, Collegium posted a profit for the first time in the recent quarter, thanks to Xtampza sales of $33.6 million -- an increase of 29% from the same quarter last year. But its profitability is still tenuous, with a margin less than 1%. Nonetheless, Xtampza's growth appears to be accelerating rather than slowing down, which puts Collegium on a trajectory that could make its shareholders rich as its products become the go-to for pain relief, especially in areas where opioid abuse is rife.

2. Athenex is preparing its phase 3 programs for the market

Athenex develops therapies for cancer using a bevy of approaches that range from traditional chemotherapy drugs to sophisticated cellular immunotherapies. Like Collegium, Athenex currently derives recurring revenue from making new formulations of longstanding and popular medications. The company also maintains a compound pharmacy business, which it uses to produce licensed oncology drugs. Last quarter, Athenex's quarterly revenue expanded by 82% from the year-prior period to reach $40.2 million as a result of increased demand for specialty drugs prompted by the pandemic. Athenex isn't profitable yet, but the real appeal of the biotech as a stock lies with the growth potential within its drug development pipeline. 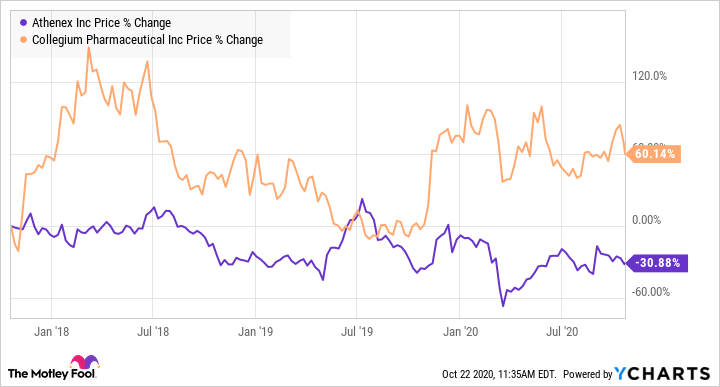 Athenex's flagship program is its potential combination therapy of paclitaxel and encequidar for metastatic breast cancer. Unlike the traditional formulation of paclitaxel, a chemotherapy drug, Athenex's formulation can be taken orally rather than infused intravenously thanks to the inclusion of encequidar. Encequidar prevents the gastrointestinal tract from absorbing paclitaxel, thereby reducing the intensity of unpleasant chemotherapy side effects like nausea and vomiting while also allowing it to remain in the patient's system for longer, increasing its beneficial effects on tumors. So far, this combination therapy appears to be effective. Phase 2 clinical trial results indicate that all of the trial's 22 patients suffering from untreatable and aggressive angiosarcomas experienced tumor shrinkage after treatment.

Athenex is currently pursuing phase 3 clinical trials for a handful of different indications with orally administered paclitaxel, but it's also awaiting judgment from the U.S. Food and Drug Administration (FDA) on the drug's approval for breast cancer treatment. This means that the company could be selling the therapy on the market by the first quarter of next year. If its medicine is approved, it'll be a positive sign that the company's approach is valid, and Athenex should start to generate new revenue rapidly. And, if reducing the side effects of chemotherapy proves to be as popular with clinicians and patients as one might expect, it's likely that Athenex will be on its way to riches, along with its early investors.