Stock markets could be in trouble after the election -- but only for short-term investors.

At long last, the Biden-Trump election 2020 debate held Thursday finally gave investors a substantive exchange of view on the issues, voiced by two presidential contenders meeting in person, and taking turns speaking to each other. And one particularly fiery exchange caught investors' attention right away.

About a third of the way through the debate, in the course of discussing healthcare and Social Security policy, President Trump declared: "They say the stock market will boom if I'm elected. If he's elected, the stock market will crash." (He then clarified that the "they" in that statement referred to "the biggest analysts," presumably on Wall Street -- and the "he" was obviously Vice President Biden).

That's a pretty scary statement if you think that the Biden-Harris ticket will win next month. And it could be correct -- in the short term.

A "short" history of the stock market (after presidential elections)

The fact is, the period immediately following contentions presidential elections has been volatile from time to time.

For example, in the period between Election Day 2008 and Inauguration Day 2009 the S&P 500 (SPY 1.10%) did indeed "crash" 20%, according to a recent Wall Street Journal analysis. (Admittedly, this happened in the middle of a financial crisis already in progress.) And eight years prior, the disputed 2000 election saw stocks drop more than 6% between election day and inauguration day.

On the other hand, the 2016 election that ushered Donald Trump into the White House saw the reverse happen -- a more-than-6% rise in S&P 500 prices.

I suppose that if small sample sizes don't bother you, this last example does tend to support President Trump's assertion that his reelection would be good for the stock market. Conversely, the 2008 post-election crash might suggest that putting a Democrat in the White House could be bad news for stock market investors.

That's not how I read the data, however.

Sure, you can focus on three isolated post-election periods, each roughly two months long (so six months total). You could roll the dice and gamble on who's going to win. I, however, prefer to take a longer view of how the stock market performs under various presidential administrations. And the long-term picture tells us that it really doesn't matter very much who ends up in the White House come Jan. 20, 2021. Over the long term, the stock market is probably going to keep going up. 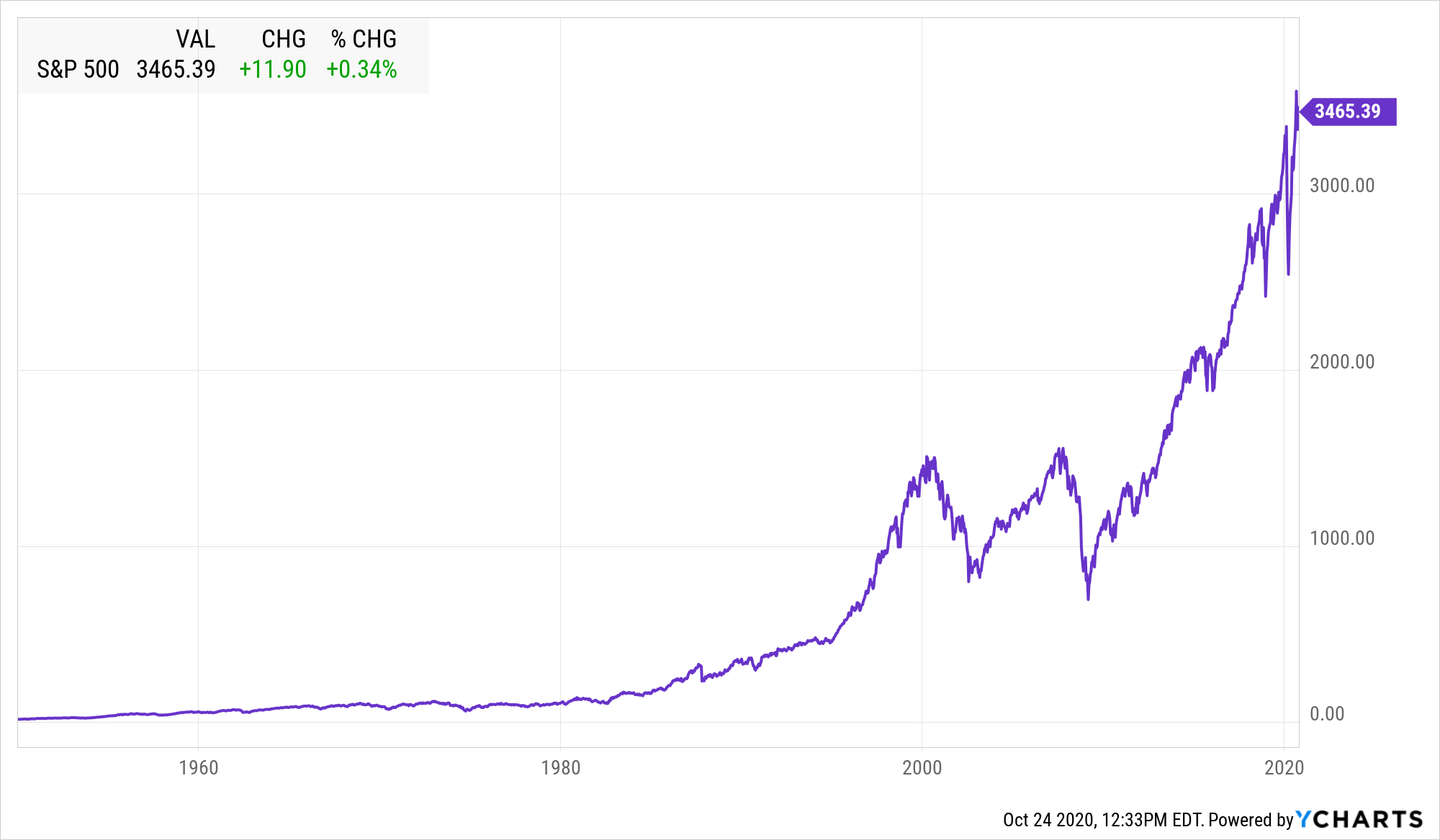 According to WSJ data, the 91-year period from the stock market crash of 1929 through the end of 2019 can be divided almost precisely between two equal periods: 45 years in which one political party or the other controlled the White House, the Senate, and the House of Representatives simultaneously, and 46 more years in which neither party had a monopoly.

When you get right down to it, then, is President Trump right to predict a stock market crash if Vice President Biden is elected next month, and a stock market boom if Trump is reelected? In the short term he might very well be right -- but he could also be wrong. Only time will tell us for sure.

For long-term investors in the stock market, though -- and here at The Motley Fool, we think all investors should invest for the long term -- the clear course of history is "up," and a stock market continuously marching higher.

So what's my election 2020 advice for investors? Don't gamble on who will win or lose the presidency in November. Instead, bet on a sure thing: That when you're investing for decades, the stock market is the place to be.

Can ETFs Alone Make You Retire a Millionaire?
397%