Shares of Beyond Meat (NASDAQ:BYND) fell by 4% Monday after chief rival Impossible Foods said that it was expanding its retail distribution at Canadian grocery stores. The news came a little more than a year after Beyond Meat entered  the Canadian market for plant-based meat substitutes. Meanwhile, the broader market sold off Monday, with the S&P 500 down by about 1.9% as investors grew more concerned over the past month's surge in the COVID-19 pandemic. The number of daily new coronavirus cases diagnosed in the U.S. set a new record high Friday, stoking fears of greater macroeconomic impacts to come.

Impossible Foods will sell its flagship Impossible Burger at nearly 600 Sobeys locations; it's the second-largest grocery chain operator in Canada. The product will also be available through Sobeys' online home delivery service. Sobeys will be the exclusive retailer of Impossible Burgers until February 2021, after which distribution will expand to the other supermarket brands Sobeys runs in Canada. 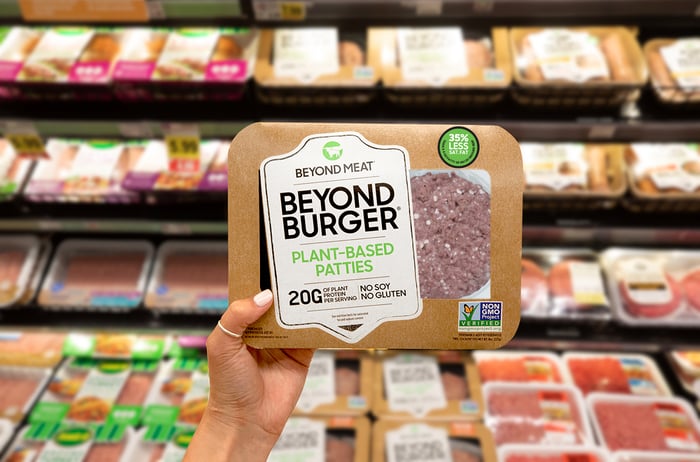 Beyond Meat started selling its products in Canada in May 2019 and has been inking distribution deals with grocery stores, including Sobeys. Customers will now be able to choose between the competing meat substitutes at many of the same retailers.

Beyond Meat is still in the early stages of implementing its international growth strategy. International retail sales in the first half of 2020 were $15.5 million, or 7% of its net revenue, and Canada is one of the countries that the company is prioritizing. Beyond Meat has also been shifting its attention away from restaurants and toward retail sales, since the pandemic has cut into restaurant traffic while boosting grocery store sales.

"Throughout the balance of the year, we will continue to invest in existing and new markets with a focus on the U.S., Canada, the EU, and Asia," CEO Ethan Brown said on the last earnings call.