Finding elite healthcare stocks that trade for under $5 is an exercise in faith. Most stocks trading that low belong to start-ups or clinical-stage biopharmaceutical companies with vulnerable market caps, very little revenue, and a bundle of "ifs."

However, for the sharp-eyed investor who's willing to suffer a lot of volatility and risk, this is where the real profits could lie. Some of today's top pharmaceutical stocks started out trading in low multiples and wound up making their early investors wealthy in the process. VBI Vaccines (NASDAQ:VBIV), Aptinyx (NASDAQ:APTX), and Selecta Biosciences (NASDAQ:SELB) are all clinical-stage biopharmaceutical companies with no net income, but miles of millionaire-making road ahead. 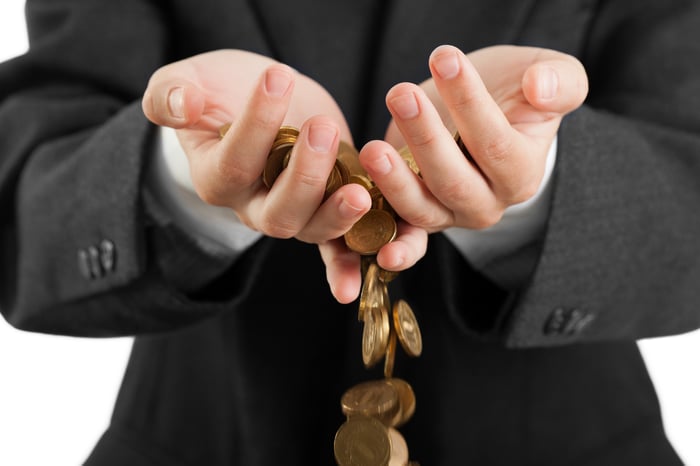 1. There are plenty of reasons to like VBI Vaccines

VBI Vaccines is a biopharmaceutical company with shares up more than 88% year to date. The company gained attention last month when it penned a $42.6 million deal with Canada to develop a COVID-19 vaccine by the first quarter of 2022.

Don't buy the stock based on that news, however. The company's vaccine candidate is still in phase 1 and may never make it to market. More important reasons to buy VBI include the company's hepatitis B vaccine, Sci-B-Vac, which had a promising phase 3 trial, or the other vaccines it has in the works for treating glioblastoma (GBM), a particularly lethal and aggressive type of brain tumor, and cytomegalovirus, a common virus that is usually only a problem for those with weakened immune systems.

The Sci-B-Vac vaccine is a big deal because more than 300 million people are living with a hepatitis B (HBV) liver infections, according to the Hepatitis B Foundation, which says that each year up to 1 million people die from HBV complications, such as liver cancer or cirrhosis.

The vaccine has already been approved in Israel, and the company said it expects to file submissions for Sci-B-Vac's approval in the U.S., Canada, and Europe by the end of the year, so it could begin marketing the vaccine as early as next year.

On top of that, VBI Vaccines says it has $86 million in cash, enough at its current burn rate of $9.5 million a quarter to last it more than two years.

2. Aptinyx has a pipeline of potential

Aptinyx is a clinical-stage biopharmaceutical company that specializes in therapies to treat nervous system and brain disorders.

Last week was crazy for the company. Aptinyx's shares briefly jumped nearly $3 to $6.30 a share last Tuesday on positive news about the phase 2 study of its drug candidate, NYX-783, as a treatment for post-traumatic stress disorder (PTSD). On Wednesday, Aptinyx stock sank and closed at $3.90 a share, after a late Tuesday announcement that the company was planning a public stock offering of 12 million shares, diluting investor's stock.

The company said it is hoping to use the extra money generated from the offering to fund its studies. There's a lot of excitement regarding NYX-783 because post traumatic stress disorder (PTSD) -- a psychiatric disorder spurred by the experience or witnessing of traumatic events, such as combat, natural disasters or sexual assault -- affects 7% to 8% of the U.S. population and as many as 8 million Americans in a given year, according to the National Center for PTSD.

All of Aptinyx's drugs are therapies that work on N-methyl-D-aspartate (NMDA) receptors, which are proteins in the membrane of nerve cells that receive signals from other nerve cells. NMDA receptors are believed to be crucial in learning and memory.

In a phase 2 study with 153 patients with PTSD, the company said that NYX-783 demonstrated significant efficacy results. Aptinyx intends to start a phase 3 study next year.

NYX-458, like all of Aptinyx's drugs, is a novel, oral small-molecule NMDA receptor modulator. The company said it is hoping the drug can help treat cognitive impairment associated with Parkinson's disease.

Besides its promising pipeline, Aptinyx says it has $115.9 million in cash, enough to fund its efforts for more than two years at its current burn rate. 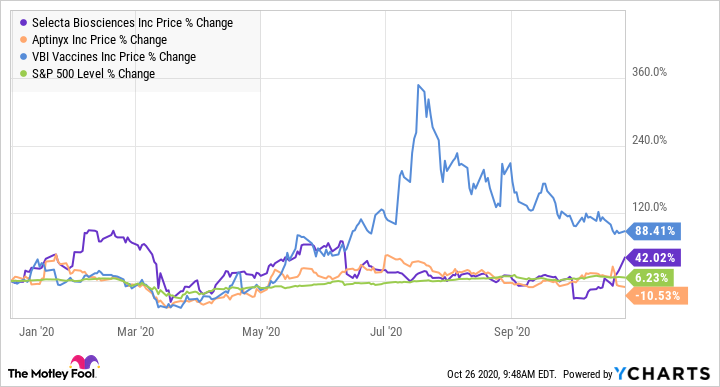 3. Is Selecta Biosciences worth, well, selecting?

Selecta Biosciences shares are up 42% year to date, including a rise of 19% this past Wednesday because of positive news on two fronts.

Last week, the U.S. Food and Drug Administration (FDA) granted rare pediatric disease status to MMA-101, a drug that Selecta and Asklepios BioPharmaceutical are working on to treat isolated methylmalonic acidemia (MMA), a genetic metabolic disorder that prevents the body from breaking down certain proteins and fats. The companies are expected to start a phase 1 trial on the drug next year.

Also just one week ago, Selecta announced that director Timothy Springer was purchasing 1,887,696 shares of its stock, signaling that he expects the company's fortunes to rise.

The company's lead gene therapy is SEL-212, which just completed a successful phase 2 trial for chronic severe gout. Selecta has already entered into a licensing agreement with Swedish pharmaceutical company Sobi for SEL-212. The deal includes $100 million in initial payments, up to $630 million in potential milestones, and royalties to Selecta. That will help the company fund the rest of its ImmTOR immune tolerance platform, including pancreatic cancer and mesothelioma drug SEL-403; SEL-302 for MMA; and SEL-313 for ornithine transcarbamylase deficiency (OTC), an inherited disease that causes ammonia to build up to toxic levels in the bloodstream.

Through the second quarter, the company reported $61.4 million in cash, which, along with the SEL-212 payments from Sobi, should provide enough money for the company to operate for another three years, it said.

High levels of risk but potential for high reward

All three of these companies are risks. That's why few mutual funds will even look at a pharmaceutical stock that trades below $10. However, all three have had recent positive news and seem to be headed in the right direction. Of the three, Selecta is further on the path to making a profit, but VBI Vaccines has strong backing and the most momentum of the three. And Aptinyx, like Selecta, has a drug with a very promising phase 2 trial with great potential to land in the black.