Please ensure Javascript is enabled for purposes of website accessibility
Free Article Join Over 1 Million Premium Members And Get More In-Depth Stock Guidance and Research
By Alex Carchidi - Oct 28, 2020 at 6:40AM

The company has struggled with drug pipeline progress, but it is still confident in its ability to provide long-term returns.

The neurology drug developer Biogen ( BIIB -0.16% ) reported its quarterly earnings on Oct. 21 , stating that its total revenue fell by 6% compared to 2019, reaching $3.37 billion for FY 2020. This contraction was led by a 10% collapse in sales of Spinraza, a therapy for spinal muscular atrophy. More importantly, Biogen took the opportunity to revise its full-year revenue estimates downward, suggesting that it has little faith that sales revenue will dramatically improve in the fourth quarter.

These tidbits are only scratching the surface of Biogen's disclosures. In fact, while the headlining data looked overwhelmingly negative, the market reacted favorably to the report, and the $39 billion market cap company's stock ended the day 0.67% above where it started. Nonetheless, there are still a couple more fumbles to unpack from Biogen's release -- not to mention the announcement of a critical program for increasing shareholder value. Let's dive in. 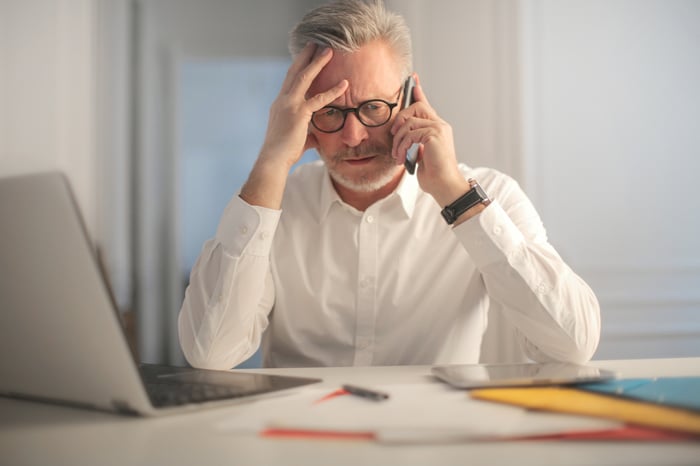 In terms of red flag findings in the earnings report, there's one central hiccup that shareholders need to know about: Biogen's GAAP net income shrank 55% in comparison to the same quarter in 2019. This collapse has its genesis in the diminishing sales of drugs like Tecfidera for multiple sclerosis (MS), which sold 15% less in the third quarter than in the year prior due to its patent exclusivity expiring. As a result, the largest segment of Biogen's MS revenue fell to $968 million. Investors should be concerned by this development, as MS drugs like Tecfidera are the company's largest single revenue segment by a significant margin.

Revenue from biosimilar products increased, with sales of Flixabi expanding by an impressive 49% year over year. Nonetheless, larger segments fared unfavorably in the third quarter. Revenue from interferon immunosuppressants for MS contracted by 11% from 2019. Royalties from the sale of Biogen's out-licensed autoimmune drug Rituxan dropped 29% to reach $288 million. Biogen's portfolio of drugs is facing increasing headwinds, and conditions in the wider economy aren't entirely to blame.

Biogen's MS antibody therapy candidate, opicinumab, has failed to deliver positive results in clinical trials (again). Biogen originally tested opicinumab for optic neuritis as well as a different form of MS in 2016, yielding similarly unsatisfying data. The latest phase 2 trial to study opicinumab didn't demonstrate statistically significant beneficial effects for either of its two endpoints pertaining to slowing disease progression, leading Biogen to stop development. There probably won't be any attempts to investigate opicinumab in the future, as the latest trial found that it was difficult to calibrate its dose to a level that is safe for patients.

But it's important to keep this project's failure in perspective. Pharma investors are unlikely to be pleased that Biogen's pipeline is one project smaller, but the termination of opicinumab is a small blip that's easily overshadowed by progress elsewhere. This quarter, Biogen initiated patient dosing in several new clinical trials. It also advanced one of its Alzheimer's disease therapies into phase 3 clinical trials and another Alzheimer's therapy into pre-commercialization regulatory filings.

The gift for shareholders in this earnings report is that Biogen will initiate a new round of share repurchasing that won't end at a specific date. This is important, as the last round of repurchasing expired at the end of September after operating for nine months. In the new round of buybacks, Biogen's board provisioned for buybacks up to $5 billion, started Oct. 20. The new repurchasing program will be a welcome boost to the company's stock price, which has shrunk slightly since the start of the year. By committing to repurchase its shares, Biogen's leadership is advertising that its financial position is strong enough to continue driving returns for its shareholders despite the recent setbacks. Investors can take heart in the fact that the company believes in its own future.

If this new repurchasing program seems brash given the company's net income collapse, consider that Biogen has $4.59 billion of cash in the bank and free cash flows of $1.09 billion in the third quarter. Even though Biogen needs to boost its revenue to continue growing, it's still a profitable company that won't have any trouble surviving for the foreseeable future. And, with its stock price supported by the buybacks, it's still feasible that Biogen's value will end the year higher than it started.