Gilead Sciences' (NASDAQ:GILD) product sales jumped 18% year over year in the third quarter thanks to its new coronavirus treatment, remdesivir, which goes by the brand name Veklury. Excluding the $873 million addition from remdesivir, sales would have been up a more modest 2%.

Remdesivir gained approval from the Food and Drug Administration last week, but the drug had previously been issued an emergency use authorization, which allowed Gilead to sell the antiviral drug. 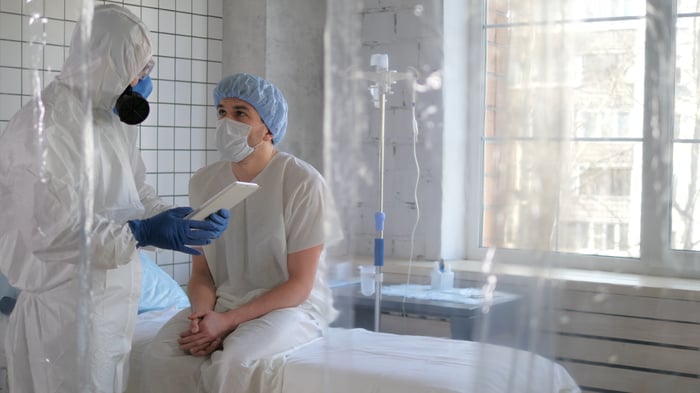 Sales of Gilead's HIV franchise were up 8% year over year, while the company's hepatitis C drugs continue to struggle with sales down 31% year over year. Fortunately the latter franchise has become a small fraction of overall sales, so the large decline doesn't have as much of an effect on overall sales as the franchise's declines used to have on Gilead's revenue.

Revenue from cell therapy products, which includes cancer treatments Yescarta and Tecartus, jumped 25%, but it's working off a small base. With sales of $138 million, Yescarta is a ways away from becoming a blockbuster, and Tecartus added just $9 million after being approved during the most recent quarter.

Sales of the rest of Gilead's products dipped 11% year over year as high blood pressure treatment Letairis and angina (chest pain) treatment Ranexa faced generic competition.Gilead kept the bottom ends of its 2020 revenue and adjusted earnings guidance in tact but lowered the top ends of both ranges. Management now thinks 2020 revenue will come in the $23 billion to $23.5 billion range, down from a range that topped out at $25 billion. Adjusted earnings per share had previously topped out at $7.65, but now management thinks they'll fall in the $6.25 to $6.60 range.

Shares of Gilead were trading down about 1.4% in after hours trading on Wednesday, following the earnings release after the closing bell.