This growth stock has delivered insane returns for investors since it first went public.

The digital health sector is expected to grow with a compound annual growth rate (CAGR) of close to 30% to reach a valuation of almost $640 billion by 2026, according to market research firm, Statista. These mind-blowing figures make one thing abundantly clear -- the digital health market is booming. And stocks in this sector have seen remarkable gains this year despite the volatility of the wider market.

As one of the world's preeminent telehealth companies, Teladoc (TDOC -3.19%) has achieved unprecedented growth since the pandemic began. The stock is up by more than 165% year to date, and the company reported revenue up 85% year over year in the second quarter, which ended June 30.

Teladoc listed its initial public offering (IPO) on the New York Stock Exchange on July 1, 2015. If you had invested in the company on its IPO date, here's exactly how much that investment would be worth today. 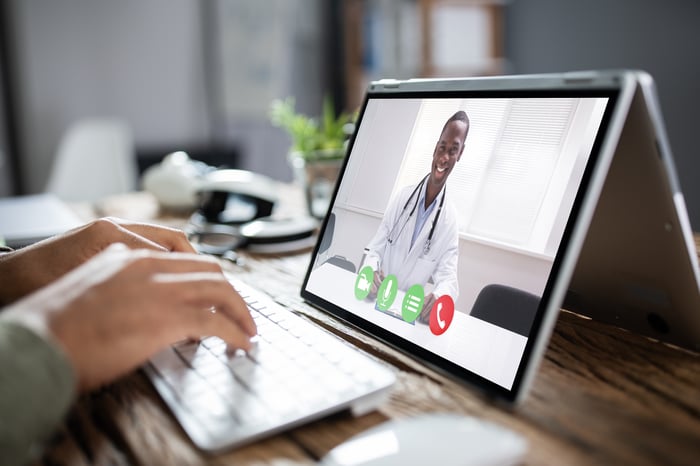 When Teladoc went public more than five years ago, its trading price at the opening bell was $28. If you had invested $10,000 in the newly public company on July 1, 2015, you would have had enough money to purchase about 357 shares.

Fast-forward to today. Shares of Teladoc sit around $222 as of Oct. 27. That initial investment of $10,000 would now be worth approximately $79,254. Finding a stock that brings a return of more than 790% in just over five years is like finding a needle in a haystack.

Now, you might be wondering what an investment in Teladoc would be worth today if you had chosen to buy shares of the company in the early days of the pandemic. In late February of this year, Teladoc was trading for about $115 per share. If you had invested $10,000 in the company's stock at the time, you would have been able to purchase about 87 shares. Just nine months later, that investment would have nearly doubled to roughly $19,314. 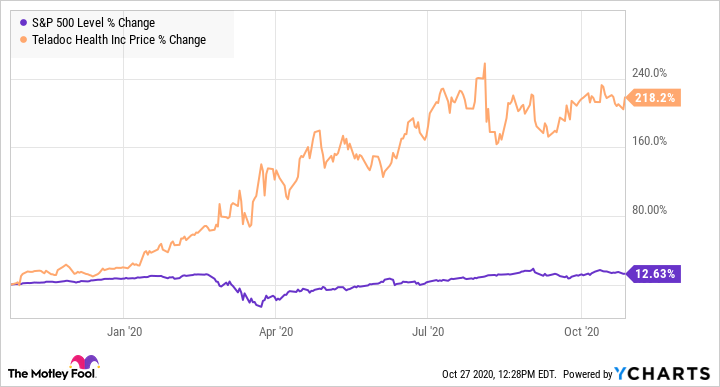 A recession-resistant buy in the coronavirus stock market

In a stock market that has been plagued by sharp ups and downs this year due to the coronavirus, Teladoc has remained on a steadfast growth trajectory and vastly outpaced the performance of the S&P 500. It's also important to note that Teladoc was a strong winner before the pandemic began. In 2019, the company grew its revenues by 32% from 2018 and saw a 57% year-over-year increase in patient visits on its platform.

During the first and second quarters of this year, Teladoc reported astronomical spikes in total visits on its platform, which were up by 92% and 203% respectively in both quarters. Looking at the company's financial performance in the first half of 2020, it reported 63% revenue growth compared to the first six months of 2019. Visits on Teladoc's platform during the first half of this year grew 144% from the first half of last year. Management expects that the company will amass revenues between $980 million and $995 million for the entire year, with 50 million paid members in the U.S. alone by the close of 2020. Teladoc reports its third-quarter results today on Wednesday, Oct. 28.

In addition to a surge in demand from the pandemic and shifting consumer behaviors that create an ongoing, heightened need for digital health solutions, there are two other very important green flags for the company's future growth. These are the company's purchase of virtual care provider InTouch Health in July and its upcoming merger with Livongo Health (LVGO). In Teladoc's second-quarter report, management stated that InTouch Health "has solidified the company's leadership in hospital-based telemedicine and is projected to grow over 35 percent in 2020."

The acquisition of Livongo, which is set to conclude before the end of this quarter, is an even more monumental move for Teladoc. Teladoc's market capitalization currently sits at $18.4 billion, while Livongo's market cap is just behind at $14.4 billion. The combination of Livongo's existing platform (which includes services focused on diabetes prevention and behavioral health) combined with Teladoc's services will create a first-of-its-kind digital health behemoth. No wonder investors are restlessly excited over the merger, which management has said "will provide a consumer centered virtual care platform for the full spectrum of health needs, creating a new standard in global healthcare delivery."

For investors who may be worried that Teladoc's gains aren't sustainable, I would argue that its growth story is just beginning. I believe that the company can continue to realize impressive returns for its investors for years to come. If you're thinking of purchasing shares of Teladoc before the Livongo merger closes, now looks like an excellent time to buy this winning healthcare stock.