In a short period of time, this immunotherapy biotech could either become a multi-bagger or trade near $0.

When it comes to winning biotech stocks this year, coronavirus vaccine developers automatically come to many investors' minds. However, one of the top-performing stocks in the sector is Northwest Biotherapeutics (NWBO -1.04%), which focuses on immunotherapies that treat cancer, and has returned a staggering 408% since January.

The main reason why investors are so excited about Northwest Biotherapeutics' prospects is that the company's 14-year-long phase 3 clinical trial to evaluate its one and only immunotherapy candidate, DCVax-L, as a treatment for glioblastoma, has concluded. Should you consider buying the stock in anticipation of the data release? Let's find out together. 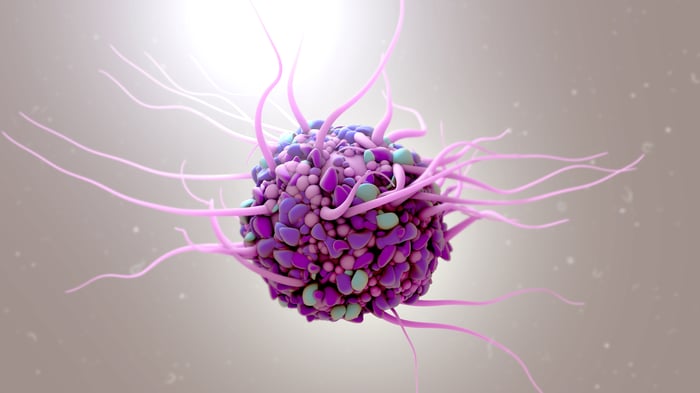 Glioblastoma is a deadly form of brain cancer prevalent in up to 15% of people with brain tumors. Even after patients receive standard of care (SOC) treatments consisting of surgery, chemotherapy, and radiotherapy, their median survival time comes down to just 15.5 months in historical studies. DCVax-L is an experimental immunotherapy that seeks to stimulate patients' own immune systems to fight cancer growth.

The potential biologic has been in phase 3 clinical trials since December 2006. In the study, all glioblastoma patients receive SOC treatments, while a random portion also receives DCVax-L via upper arm injections. A key trial endpoint requires at least 233 patient deaths out of a total of 331 participants enrolled to calculate a survival benefit for DCVax-L, if any. The company completed its study on July 24, and the data is currently being reviewed by statisticians. In the meantime, speculations on the results have ranged from wildly enthusiastic to pessimistic from excited investors and short-sellers.

The bullish case for Northwest Biotherapeutics stock is straightforward: The DCVax-L clinical trial was supposed to wrap up as early as November 2016, but had to keep going because the projected number of deaths had not occurred by then.

Around the time when the trial was enrolling, only 3% of glioblastoma patients who received SOC survived over five years. Due to extremely low survival rates for patients who receive SOC treatments, bullish investors argue that there is no other logical explanation for the clinical study going into overtime than DCVax-L keeping patients alive longer than expected.

The bearish case is a lot more complicated.

Clinical trials investigating experimental biologics for deadly diseases with a lack of therapeutic options usually have pre-planned interim analyses. DCVax-L's phase 3 trial had two such analyses built into the study.

The analysis is conducted by an independent data-monitoring committee (DMC) that can recommend that the trial stop early if an experimental therapy demonstrates statistically meaningful efficacy against SOC treatments. This way, the biologic can quickly advance to the approval stage in order to save more lives.

Northwest Biotherapeutics' DMC carried out two interim analyses on the DCVax-L study in 2017 and 2018 (more on this later). Both times, however, the company published the DMC's findings as blinded, and the trial continued. Unfortunately, that doesn't make any sense at all in the context of the bullish argument. If the trial is running much longer than expected and it is DCVax-L keeping patients alive, then why wasn't the trial stopped for efficacy?

If all this seems confusing, consider the following case study. In June 2009, Novocure (NVCR -0.18%) began phase 3 clinical trials involving a wearable device (Optune) that treats glioblastoma by applying mild electrical fields through the scalp to stop cancer cells from dividing. During a pre-planned interim analysis in 2014, Novocure's DMC discovered that glioblastoma patients treated with Optune plus SOC treatments survived a median of 3.2 months longer than patients who received SOC treaments alone.

Even though that benefit may seem small, it was enough for Novocure's DMC to recommend that the company stop the trial early as the benefit was statistically significant. Optune was subsequently rushed to the market, having received an approval from the U.S. Food and Drug Administration (FDA) in 2015.

In summary, Northwest Biotherapeutic bears argue that if it is indeed true that DCVax-L keeps patients alive this long, then the trial should have already stopped so that glioblastoma patients can access it directly. Bears also allege the fact that the study went unabridged for nearly 14 years indicates DCVax-L may have no benefit whatsoever, and could even be harming patients. It is not unheard of for the SOC treatments in these types of trials to keep patients alive beyond reasonable expectations, causing experimental therapies to fail in clinical testing.

Chronicles of a failure foretold?

Regardless of bullish or bearish claims, the fact is that Northwest Biotherapeutics' management has a reputation for secrecy. Remember those interim analyses that happened in 2017 and 2018? Well, they were actually supposed to take place seven years ago.

On Dec. 10, 2013, Northwest Biotherapeutics issued a press release titled "First Interim Analysis Of NW Bio's Phase III GBM Trial Triggered By Reaching Required Number Of 'Events'" and told investors that an interim analysis was coming "six to eight weeks from now." However, in a press release dated Aug. 13, 2014, Northwest Biotherapeutics stated: "No interim analysis of efficacy in the Phase III trial has been done."

That's not all. In 2015, the FDA placed a clinical hold on the DCVax-L trial that was eventually lifted in 2017. The company never disclosed why the clinical hold took place nor the reasons for its resolution to the Securities Exchange Commission (SEC).

Given that DCVax-L is its only pipeline candidate and that the company has about $5.96 million in cash and $14.9 million in assets, Northwest Biotherapeutics will probably be a $0 stock if the phase 3 DCVax-L clinical trial fails. On the other hand, if the trial succeeds, it would be able to capture a market opportunity projected to grow 17.4% per year, reaching $3.3 billion by 2024.

Right now, Northwest Biotherapeutics has 697.6 million shares outstanding, as well as 454.6 million shares held in stock options or warrants, giving it a total dilutive market cap of $1.91 billion. The company has lost $895.1 million since its inception in 1998.

If a company is unprofitable and wishes to continue its operation, it must issue more stock to raise cash at the expense of existing shareholders. Northwest Biotherapeutics has done exactly that. Back in 2011, the company had just 5.887 million shares outstanding, compared to over 1 billion units stock on a fully diluted basis as of its last quarterly report ended June 30. On Oct. 12, Northwest Biotherapeutics filed an offering to sell 12.2 million more units of its stock.

Investors should closely examine the bullish and bearish cases and determine which one best fits their agenda. Investing in small-cap biotechs that could succeed or fail based on one candidate is about as risky as it gets, despite the potential reward.

Did Northwest Biotherapeutics Just Check Off 1 Box Needed for Its Stock to Double?

This Illegal Drug Could Be the Answer to Fighting Brain Cancer