After 30 years in the solar industry, this company may just be getting started.

Array Technologies (ARRY) hit the public markets on Oct. 15 with a bang. The biggest IPO for a US-based solar company valued Array at well over twice the initial market capitalization of any previous solar company IPO on their first day of trading. Profitable, growing fast, and with fresh cash in its coffers, is Array Technologies stock a buy? 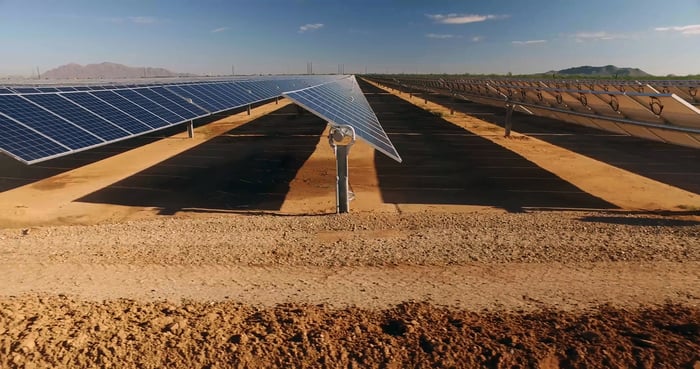 An overnight success 30 years in the making

Since Array first introduced its trackers, they have become increasingly sophisticated, with its latest products taking advantage of machine learning techniques to optimize the system's output in a variety of conditions, such as cloudy days and uneven terrain, while lowering the systems' vulnerability to weather events such as snow, and even hurricanes.

Array introduced its first product in 1989 -- well before solar was a thing. That means the company has had plenty of time to build a robust organization, flesh out its product, and become a leader in the industry. Today, Array Technologies has deployed its trackers into over 22GW worth of utility-scale solar projects, a market segment that is expected to grow 45% in the next five years.

And Array Technologies doesn't just make a leading product in a growing market -- it does so profitably. In 2019, it reported $647.9 million in revenue with gross margins of 23% resulting in a net profit of $39.7 million. In the first six months of 2020 alone, these numbers grew to $552.6 million, 25%, and $76 million, respectively. This is the kind of performance and growth that Wall Street loves, with Array's shares popping 65% on their first day of trading.

A bigger opportunity may lay ahead

So, Array has built a profitable business in a growing space. But, while market analysis firm Wood Mackenzie expects the number of tracker installations to continue to grow for the foreseeable future, it also predicts the dollar value of the tracker market will eventually "flatten" as prices for solar systems continue to drop, putting pressure on margins.

Here is the question an investor needs to answer to decide whether to invest: Can the company continue to grow its revenue while protecting its margins?

So, if Array can do internationally what it has accomplished in the U.S. and grow its share of projects to more closely match NEXTracker's share, it is bound to grow faster than the overall tracker market in the next five years. And the company has said it plans to use its fresh IPO cash to do just that.

The challenge in solar is usually margins. Prices for solar systems will continue to decline as the industry tries hard to turn everything it touches into a commodity. However, intellectual property (IP) in the form of novel product design and innovative software has proven advantageous for other companies in the solar industry, allowing them to protect and even grow their margins over time.

Array has several key advantages here. Its trackers include significant software IP that can be continuously improved and may be difficult to copy. The company claims that its latest machine learning software can boost a system's production by up to 5%. Because solar projects count their lifetimes in decades, 5% additional energy is actually a big deal.

In addition, Array's products distinguish themselves by their simple mechanical design, with few moving parts that require little maintenance. The company claims that its latest design can reduce operating costs by up to 42% over a project's lifetime. In international markets, where technical assistance from suppliers can sometimes be days or even weeks away, simplicity and reliability can be significant advantages.

As stated above, investors interested in participating in the growth of the solar industry would do well to look for companies with products that can grow as fast or faster than the overall market while protecting their margins. If Array can show that it can succeed internationally, while protecting its margins, the company may continue to delight Wall Street for years to come.