Marijuana is still illegal at the federal level in the U.S. But that hasn't stopped the American pot industry from evolving. Individual states have been independently legalizing cannabis to various degrees: 33 and D.C. have made medical cannabis use legal for some conditions, while 11 and D.C. have made recreational cannabis use legal too. In November's election, a few more states have legalization proposals on their ballots.

Some pundits see reasons for hope that federal legalization could occur by 2022, but either way, the future looks bright for two Illinois-based pot stocks: Green Thumb Industries (OTC:GTBIF) and Cresco Labs (OTC:CRLBF), which have established themselves as the best cannabis stocks to buy in November. Not only did they grew their revenues at remarkable rates, but they've also reported consistent EBITDA (earnings before income, tax, depreciation, and amortization). And their expansion plans amid the pandemic are commendable. 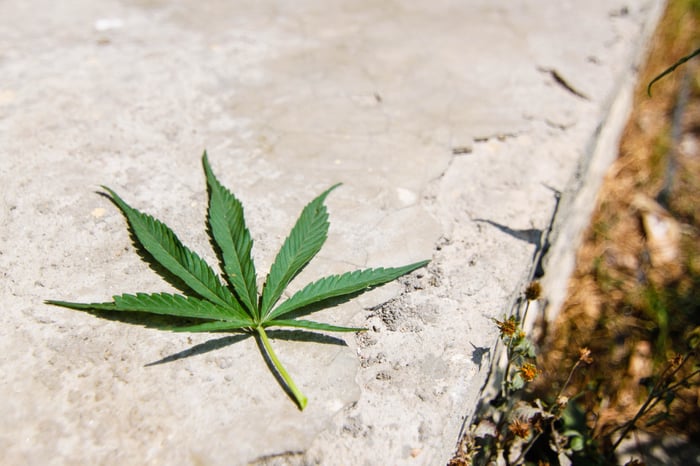 Cresco Labs has a home-field advantage

Recreational marijuana became legal in Illinois on Jan. 1, and since then, sales have grown at a tremendous rate. In January, legal recreational sales clocked in at $39.2 million; By September, the monthly total had risen to $67 million, and total recreational sales for the year hit a whopping $431 million.

Combined, medical and recreational sales came in at almost $100 million in September, reflecting the strong demand in the state. Cresco Labs, which sells its marijuana products under the brand names Cresco, Reserve, Remedi, Good News, and High Supply, is strong in its home state, where it operates nine stores. But it's also eyeing other key markets like Pennsylvania, Ohio, and Maryland, where it sees huge potential.

By targeting robust cannabis markets, Cresco boosted its 216% year over year to $94.2 million in the second quarter. Its wholesale segment contributed 59% of total revenue, while retail sales accounted for the rest. Cresco operates 19 dispensaries in nine states, and in Q2, its sales rose by at least 30% in all of them except Massachusetts, which paused recreational cannabis sales for part of the quarter due to the coronavirus pandemic. Higher revenues lifted Cresco Labs' EBITDA to $16.4 million, up from $2.2 million in Q2 2019.

Investors will learn more about this $1.5 billion market cap company's growth strategies when it reports its third-quarter results on Nov. 18.

Green Thumb is growing for a fruitful future

Green Thumb has dispensaries in 12 states, but like Cresco, it also focuses on its home state of Illinois where eight of its 49 stores are. Earlier this month, the company noted that experts see Illinois' cannabis market potentially reaching a value of $2.5 billion annually once it matures.

Green Thumb offers its medical and recreational marijuana products under the Dogwalkers, Dr. Solomon's, and Rhythm brands, which it sells through its Rise and Essence store chains.  The company's sensible decisions include expanding in other key markets such as Pennsylvania, where it opened three new medical cannabis stores this year.

Company revenue grew a stunning 167% year over year to $119.6 million in its second quarter. Those higher sales generated $35.4 million in EBITDA, a striking jump from $2.3 million in the prior-year period.

It still holds 96 licenses for retail stores, so it has plenty of capacity for growth even before it expands into new markets. The $3.4 billion market cap company reports its third-quarter results on Nov. 11. 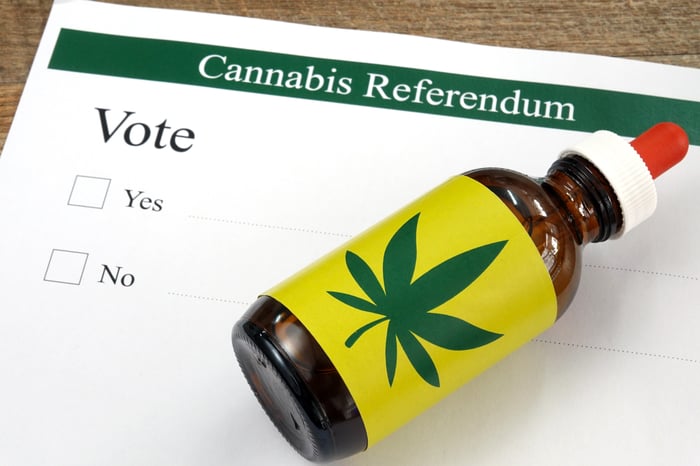 The election could bring positive news for these two pot stocks

Looking at the rising sales of cannabis in Illinois this year, there is no doubt that this market will do well in the future. The state plans to issue 75 cannabis dispensary licenses in the coming weeks, opening more doors for these two companies. Financially, both are well-positioned with fuel in the tank for expansion. Green Thumb ended the second quarter with $82.9 million in cash and cash equivalents and $95.2 million in total debt. Meanwhile, Cresco Labs had $71 million in cash and cash equivalents on the books, while its short-term debt and the current portion of its long-term debt totaled $24 million.

Shares of Green Thumb have soared 70% this year, while Cresco Labs is up by a more modest 10%. Still, that's much better than the industry benchmark Horizons Marijuana Life Sciences ETF's decline of 28% year to date. 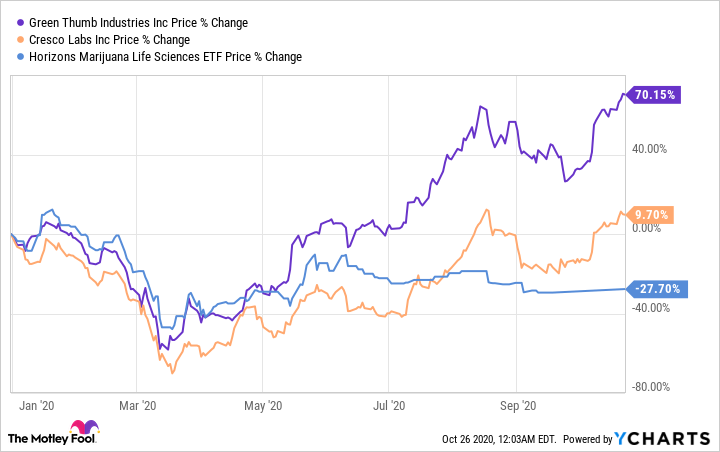 The U.S. cannabis industry's legal sales could hit $30 billion annually by 2025, according to New Frontier Data. And that estimate only includes sales in states where pot is legal. Voters in New Jersey, Mississippi, South Dakota, Arizona, and Montana will decide on legalization proposals on Nov. 3, and passage of any or all of those propositions would offer these two companies to expand sales even further.

Now, imagine the growth potential if the federal government legalizes marijuana by 2022. Looking at all the positives discussed above, Green Thumb Industries and Cresco Labs are surefire buys this year.