NextEra Energy is leveraging its leadership in renewable energy to accelerate an emerging green technology.

NextEra Energy (NEE -0.27%) couldn't be more aptly named. The utility has been one of the leaders in transitioning the energy industry from fossil fuels to renewable energy. It's currently the top global producer of power from the wind and sun. Meanwhile, it has more renewable energy development projects in its pipeline than the entire existing production capacity of any other company in the world, including its own.

The company has also been one of the early leaders in developing next-stage green energy technologies. It's already an emerging leader in battery storage. Now, it has its sights on the next frontier: The potentially massive green hydrogen market. Here's what the company's management team had to say about their green hydrogen plans on its third-quarter conference call. 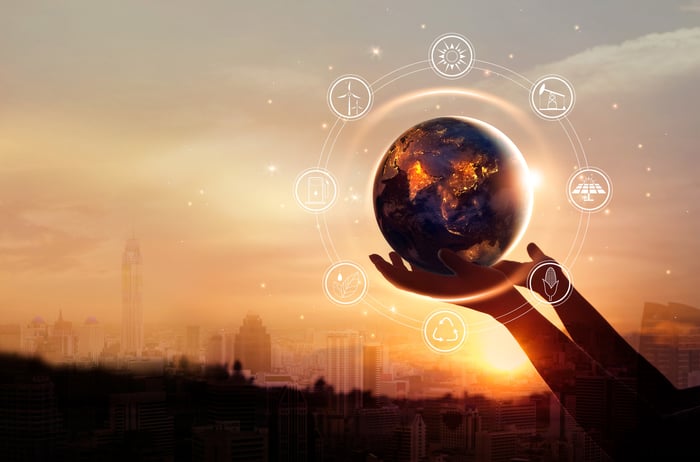 Potentially putting a lot of toes in the water

NextEra Energy detailed its first foray into green hydrogen -- which uses renewable energy to electrolyze water and separate hydrogen from oxygen -- last quarter. It's planning a $65 million pilot project that would utilize solar energy to produce hydrogen and replace a portion of the natural gas consumed at one of its power plants. If all goes according to plan, this pilot project will start service by 2023.

While that project is an important first step in the company's green hydrogen ambitions, it's far from the only one. CFO Rebecca Kujawa provided more details on its approach to this emerging technology during the third-quarter call:

We are optimistic about the potential for green hydrogen to support an emissions-free future. Consistent with our toe in the water approach to new opportunities, Energy Resources has developed a pipeline of approximately 50 potential green hydrogen projects, spanning the power, transportation, and industrial sectors. These projects serve a variety of end uses, and similar to the strategy employed in wind, solar, battery storage, and other areas, provide the opportunity to develop early learnings with relatively small investments to set the stage for much larger capital deployment as cost declines and technology improvements are realized. Over the next several quarters, we expect to add to this pipeline while advancing select projects, as we position ourselves to continue to be a leader in the decarbonization of the energy sector. We remain excited about hydrogen's long-term potential to further support future demand for low-cost renewables as well as accelerate the decarbonization of transportation fuel and industrial feedstocks.

As Kujawa noted, NextEra is working on dozens of small green hydrogen projects to learn how to best utilize this technology. As it refines its approach and costs come down, it will invest in larger projects that could potentially move the needle for shareholders.

First a trickle and then a gush

NextEra Energy's methodical approach to investing in new green energy technologies has paid big dividends for its investors over the years. Kujawa pointed out on the call that it took the company 20 years to build out its current renewable energy portfolio. By taking it slow, the company has improved its investment returns as costs have come down, helping to grow its earnings and dividends at an above-average pace over the years. Now it's on track to nearly double its capacity over the next few years.

It has taken a similarly slow approach to developing battery storage projects. Because of that, it has been able to learn how to best utilize this technology, drive down costs, and benefit from greater scale. That strategy has paid off, enabling the company to accelerate its battery storage development initiatives over the past year. It currently has 2.2 GW of battery storage projects in the backlog, which is more than 10 times larger than its current operating portfolio. Battery storage is thus emerging as an important stand-alone business, with NextEra expecting to invest more than $1 billion in new projects next year.

Green hydrogen will likely follow this path of slow initial development as the company understands how best to use the technology and reduce costs. Then, once it reaches an inflection point, the company will likely accelerate and rapidly scale the business. While it will probably take several years to reach that point, NextEra's proven success in wind, solar, and battery storage bodes well for its ability to make a lot of green from this technology in the future.

Analysts believe green hydrogen will be a more than $10 trillion market in the decades ahead, as it could be the key fuel to replace hydrocarbons. While many companies are looking to tap into this market potential, NextEra stands out as a likely leader given its success in other green technologies. It's an excellent way to invest in this potentially massive market opportunity.