The S&P 500 index currently sits at just a slight loss on the year, but some household names have lagged the market's rebound since March. Shares of Walt Disney (NYSE:DIS) and Hasbro (NASDAQ:HAS) are down year to date, but with the economy continuing to show signs of a recovery, now is the time to consider adding shares of these top consumer goods stocks before better news sends them higher.

The force is strong with Disney+

Disney stock trades at $121 as of this writing. That is down from its 2019 high of $153, which came after the successful launch of Disney+ last fall. Theme park closures and a weak advertising market have weighed on Disney's shares this year, but the House of Mouse is starting to shift more focus to its direct-to-consumer business where continued subscriber growth could fuel the stock to new highs over the next five years.

A scene from season two of The Mandalorian. Image source: Walt Disney.

Disney is off to an impressive start with streaming. Across Hulu, ESPN+, and Disney+, there are more than 100 million paid subscribers. However, investors are closely monitoring the growth at Disney+, which stood at 60.5 million subscribers in early August. That's impressive for a service that just launched in Nov. 2019.

Disney+ is nowhere close to its full potential. The service has already reached management's fiscal 2024 target range of 60 million to 90 million subscribers, but it's just getting started. The company estimates its addressable market to be more than one billion people around the world who identify themselves as true fans of Disney's content. Earlier this year, an analyst with Guggenheim Securities estimated that Disney+ could reach 226 million subscribers by fiscal 2024.

With demand soaring for digital entertainment, Disney is moving swiftly to capitalize on that opportunity. It recently announced a reorganization of its media and entertainment businesses. The changes will allow the content-creation teams to focus on producing shows and movies, while another group handles the business side of things. This will significantly bolster Disney's slate of new releases.

The current stock price undervalues Disney's digital future. The share price trades at just above the level before Disney's direct-to-consumer plans were officially unveiled 18 months ago.

Third Point's Daniel Loeb, whose firm owns a large stake in the stock, believes Disney's streaming business could be worth "hundreds of billions" over the long term as Disney+ expands its subscriber base and potentially raises its monthly fee to be more in line with Netflix. For perspective, Disney and Netflix currently trade at the same market value of about $215 billion.

The second season of the hit show The Mandalorian launched on Disney+ at the end of October. The series will serve as a mini-catalyst through the holiday quarter. Last year, the show created tremendous buzz on social media when Disney+ had less than 25 million subscribers. With more than 60 million going into the new season, plenty of word-of-mouth should drive another wave of new additions to the service. A better-than-expected holiday quarter, led by strong subscriber numbers, could shift investor sentiment to send the stock higher. 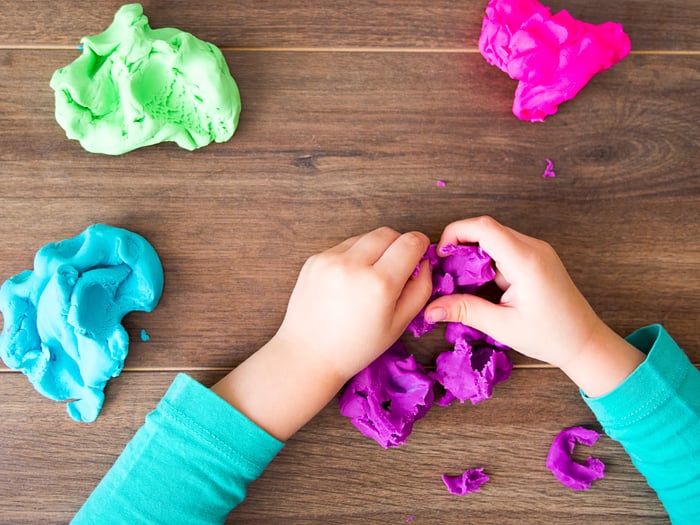 Star Wars has been good for Hasbro

The new season of The Mandalorian is actually an even bigger near-term catalyst for Hasbro, which needs a shot in the arm after reporting disappointing revenue performance for the fiscal third quarter.

Revenue dropped 4% year over year in the recent period, but most of that was blamed on production and delivery delays in the film and entertainment business. The stock dropped following the news, but there were plenty of signs the business is heading in a positive direction.

Hasbro reported 4% growth in revenue from its franchise brands, which includes Transformers, Play-Doh, Monopoly, and My Little Pony products, among others. Sales of these classic toys and games have made up the majority of Hasbro's sales in recent years.

Hasbro will be up against a tough year-over-year comparison with last year's release of Frozen 2, but it's already off to a good start in the fourth quarter with products selling well during Amazon's recent Prime Day and with other large retail partners.

"Our teams are working in concert with our retailers to drive and fulfill demand this holiday season," Hasbro CEO Brian Goldner said during the third-quarter conference call. "Importantly, they have positioned us for what we believe should be a good holiday season for Hasbro."

After the recent sell-off, investor expectations have fallen, which presents an opportunity to buy this top consumer brand at a discount. Hasbro's forward price-to-earnings (P/E) ratio based on earnings estimates for 2021 is currently 18.7. That compares favorably with the S&P 500's average forward P/E of 24.2.