Chief executive officers typically shy away from taking political sides in an election for many reasons. One reason is that investors typically frown on alienating a significant portion of customers. Another is that you could be unnecessarily creating a contentious relationship with the most powerful person in the free world.

This doesn't mean that CEOs don't secretly hope one person or the other wins and don't watch the election outcome intensely. Below are three companies likely keeping a sharp eye on what happens with this election and weighing whether Joe Biden or Donald Trump will be better for their business. There might even be fear in the C-suite as the country potentially faces a transfer of power. 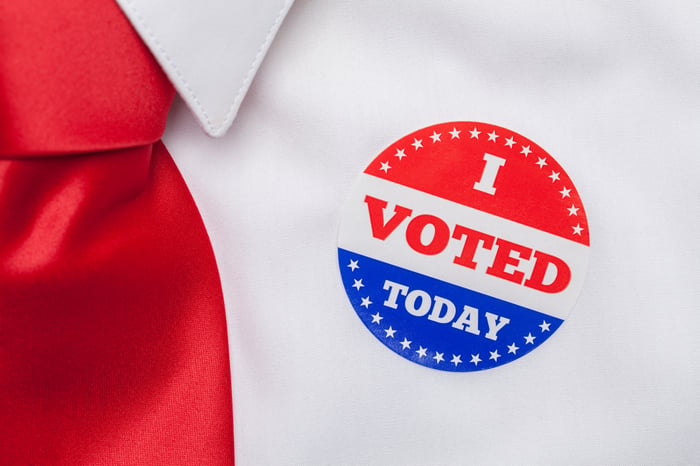 Social media companies have become an easy target for politicians, regardless of party. For Alphabet (NASDAQ:GOOG)(NASDAQ:GOOGL), there is twice as much criticism. YouTube -- the company's video-sharing website -- brought in $15.1 billion of revenue in 2019 and counted 73% of U.S. adults as users. The company's search engine, Google, is so dominant it has become a verb. With such dominant businesses, why fear the election?

The U.S. Department of Justice (DOJ) has sued the company, alleging violations of antitrust laws, saying Google's 90% of online search market share is the result of problematic business practices. Since the lawsuit was brought by the Trump administration, you may be thinking that Google CEO Sundar Pichai would be rooting for a Biden win. However, some think the company may have a tougher time fighting the suit in a Biden administration. Out of 50 states, the antitrust suit was brought by 13 mostly Republican attorneys general. Other states reportedly declined to join as they prefer a more aggressive complaint targeting how the tech giant uses search to favor certain businesses and dominate advertising, and there are worries Biden might follow this path.

Investors in Alphabet should be wary of the upcoming election, as Washington's focus on trillion-dollar technology companies appears to only have two outcomes: bad and worse.

Humana (NYSE:HUM) is an insurance company that focuses on government-sponsored programs. Humana's $65 billion of annual revenue is generated primarily by covering members of Medicare Advantage, Medicaid, and the military's Tricare program. The government offloads the risk of covering people by paying a fixed price to a private company, in this case Humana.

These programs have grown in popularity over the years. Enrollment in Medicare Advantage has risen from 22% of all Medicare recipients in 2008 to 36% of recipients today, or more than 24 million enrollees. The programs continue to expand. Next year, hundreds of new counties will have access to Medicare Advantage, thanks to new regulations. The numbers are more impressive for Medicaid, as more than two-thirds of beneficiaries are enrolled in private plans.

One of the proposals in Biden's healthcare plan calls for allowing Americans to buy into Medicare at age 60, instead of 65. This would allow private insurers to offer Medicare Advantage at a younger age as well, expanding Humana's potential customer pool.

It's harder to pinpoint what effect the re-election of President Trump could have on the company. On one hand, the president's 2021 budget takes aim at Medicare and Medicaid by not budgeting for anticipated spending growth. The reduction in spending could come directly out of the company's future revenues.

However, a 2019 executive order by the president is clearly geared toward privatization of the Medicare program by removing some of the patient protections that make it uneconomical for private insurers. This result would likely shift even more of the beneficiaries to plans like Humana's. Humana CEO Bruce Broussard, appearing on CNBC in July, was careful with his words, saying, "we see bipartisan support for a Medicare Advantage type of structure."

With so much uncertainty about what the future of healthcare will look like under either candidate, Humana has reason to be both hopeful and fearful about the election. What impact the election has on the company likely won't be felt for months, if not years. Buying shares of Humana may depend on seeing the world as glass half-full more than betting on a specific election outcome.

Halliburton (NYSE:HAL) pioneered hydraulic fracturing, or "fracking," starting in the late 1940s. Fracking refers to injecting liquid, sand, and chemicals into the ground at high pressure in order to force out oil and gas. The practice became controversial due to environmental and health concerns and the Institute for Energy Economics and Financial Analysis recently reported that, thanks to the pandemic-fueled drop in demand, the "shale oil and gas sector suffered through its worst financial performance in years during the second quarter of 2020. ... results that followed a decade of negative free cash flows for the industry."

Even before the pandemic, Halliburton management planned to reduce capital spending by 20% in 2020 . The pandemic has only accelerated the situation. At the beginning of September, the largest oil-field services company, Schlumberger, announced it was merging its fracking assets with Liberty Oilfield Services and taking a stake in the resulting company. When the largest company in your industry essentially throws in the towel, it isn't a great sign.

It could get worse. While Biden has insisted he wouldn't ban fracking, except on federal lands, he has made no secret of his desire to move the country to renewable energy sources. He has also signaled his intent to reverse tax code changes that were very favorable to oil and gas companies: especially frackers. A declining industry and the prospect of beneficial tax laws being reversed give Halliburton investors two very good reasons to watch the election carefully.